However, I, a professional genealogist, keep coming up with metes and bounds questions for my neck of the woods—the genealogist in New Jersey and every other state. What happened when the tree that was used as the starting point died or was cut down for firewood? Where did the rock go that marked the long ago corner of the lot? Did the building of roads have any effect on surveying and property lines? And, possibly most interesting, when are our ancestors more than just our ancestors?

It is true that the earliest records family history researchers will find use trees, rocks, a bend in a creek or some other land feature that might be considered permanent in land descriptions. 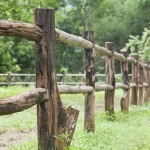 The land in one of my early family history research in New Jersey deeds is recorded just this way:Lemuel Cobb to Nicholas Teachman

What happens when a settler stays awhile? Could a neighbor’s milk cow wander off? Have there been property line disputes? Did a path turn into a lane turn into a road? My children roll their eyes when I start telling them about how the two lane gravel road of my childhood has turned into a four lane paved thoroughfare that they take without a thought on their way from point A to point B.

So it was with our ancestors. Toward the middle of the 1800s, rocks, trees and forks in the road started becoming people in deeds:

As time went on, family history researchers will find that the marking of property lines became simpler. Fences, walls and established roads could be part of the land description. Adjacent property owners might be mentioned in the deed.

As a family history researcher, be aware that strategically placed stakes may have taken the place of the rock, tree or bend in the road. Links and chains have mostly given way to feet and inches. Family history researchers will find that neighbors or former property owners can still be mentioned as part of a land description in a deed. Often property descriptions now include terms such as “block” and “lot”. 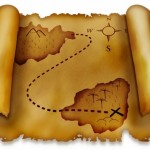