The legacy of Representative John R. Lewis, D-Georgia, shows that a genealogist must always go beyond census records to get the full picture of a family. Here RecordClick’s professional genealogist John Shurtliff details how one looks into the records.

In honor of Black History month, this RecordClick genealogist wants to recognize statesman Representative John R. Lewis of the Fifth Congressional District of Georgia. His legacy includes his noted work as a champion for American Civil Rights. Representative Lewis has a legacy of commitment to changing history. His family history is an important story, too.

The genealogist will see that John Robert Lewis, is first found in the 1940 U.S. Census in Cross Roads Precinct in Pike County, Alabama. He is listed as the youngest child of Eddie Lewis, age 30, and Willie Mae Lewis, age 24. The Lewis children are: Ora Lee, 3; Edward, 2; and John Robert, 2/12. Father Eddie was a farmer and was paying $2 a month rent.

Rep. Lewis recounted some of his childhood memories in his memoir, Walking with the Wind. 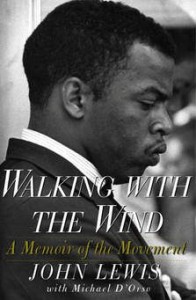 In his memoir, U.S.Representative John R. Lewis details his ancestry.

His mother was Willie Mae Carter, the daughter of Dink and Della Carter. In the 1920 U.S. Census, Dink, age 37, and Della, age 28, are the parents of seven children. At that time, the oldest was 13 years old. Living next door to Representative Lewis’s maternal grandparents, Dink and Della Carter, were his great grandparents, Dink’s parents – Frank Carter, age 56, and Betsey Carter, age 55. All of Representative Lewis’s relatives listed in the 1920 U.S. Census were born in Alabama. His great grandfather, Frank Carter, was listed as the son of Tobias Carter. Tobias had been a slave.

In his memoir, so far as Representative Lewis knew at the time, the family members were all from Alabama.

When a working genealogist searches a U.S. Census, one must be aware that the document rarely tells the complete story. A U.S. Census will give the genealogy researcher a heads up about a larger and fuller story to be told. According to these U.S. Census records, Tobias Carter was born in approximately 1820. His wife, Elizabeth, was approximately a year younger.

The professional genealogist can see that there is a good story here in the U.S. Census of 1880 and of 1870.

This genealogist will note that a “Beat” is the term used for a part of a county in Alabama. It is similar to a township or precinct. Here in this census document, Beat No. 6 was Tanyard Beat in Pike County. 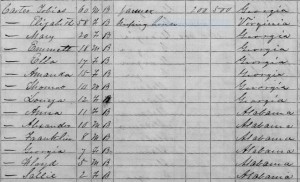 The census documents tell a working genealogist that at some point Tobias and Elizabeth found each other in Georgia. They began a family and moved to Alabama in approximately 1858 between the births of Thomas and Anna. Because there are different last names listed, this genealogist thinks that the mothers of Fannie Curtis and Puss Miller were likely the older daughters of Tobias and Elizabeth. From this document, the genealogist can see that there also are clues that point to who these older daughters were married to.

The experienced genealogist will know that there is more to a family story–always.

Here, Elizabeth, born into slavery, wound up in Georgia where she met Tobias, who was also a slave.

This is where the ancestral story leaves more questions for which the genealogist will continue the search to find answers. For the genealogist working on African American family histories and records, the search can be complicated, challenging and is always important.

The fact that this couple had so many children in Georgia and then made their way as a family to Alabama before the Civil War is unusual. An astute genealogist might ask:

From this bit of research into the family tree of Representative John Robert Lewis, the genealogist can see that his family has a remarkable and intriguing American history.

When you hire a genealogist from RecordClick, you get specialists who will ask the right questions, find the correct documents and tell your ancestral stories.