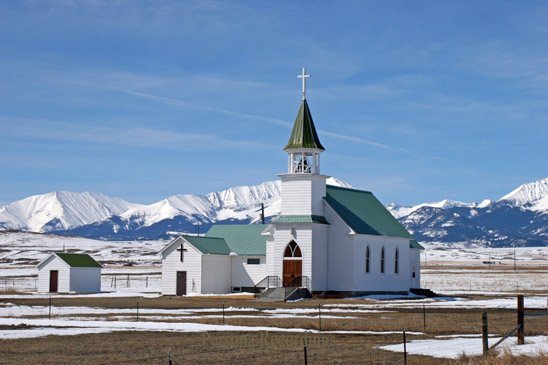 If the promise of a great sermon doesn’t get you out of bed on Sunday morning, the fact that there may be a veritable gold mine of genealogy research records waiting for you under the steeple, may just make a believer out of you. According to professional genealogist Patricia Dingwall Thompson, early church records pre-date the first federal census by 170 years, and they provide relationships not available in the censuses for 230 years. In this article, Tricia shares some great tips on how and where to access old church records, proving that there truly is a “fellowship of kindred minds” when it comes to ancestor search.

My favorite old sweatshirt was emblazoned with the saying, “Old genealogists never die, they just lose their census.” It underscored the value all genealogical researchers place on this vital tool of the trade, but federal censuses weren’t begun in the United States until 1790 (and let’s not even talk about the early enumerations from Georgia), they were taken only every 10 years, they don’t list the names of all household members until 1850, they have no familial relationships until 1880, and How could those firefighters ever have allowed the 1890 census to burn up?! For all of these reasons and many more, genealogical researchers look for census alternatives and supplements to trace family trees. One of the most important among these on your search list should be church records.

Early church records pre-date the first federal census by 170 years, and they provide relationships not available in the censuses for 230 years. Other information, such as exact birth, marriage, and death dates, aren’t on any census. If your ancestors stretch back to New England, the New England Historic Genealogical Society’s website American Ancestors, should be one of your first stops. This is a fee site, but if your people lived in that area, the subscription price is a true bargain for their extensive records online, including invaluable church records. Be imaginative in spelling your ancestor’s name in the search fields, including the first name. If you enter “Thomas” but the record lists “Thos,” you won’t get a result. I try to avoid first names if possible, but when the number of hits on a surname exceeds 100, I’ve got to try all varieties of the first name I can think of. (Soundex is an option for surnames only.)

New England doesn’t have a corner on the market of church records. Clergymen often accompanied, or followed soon, the early explorers and settlers of this continent. And as they aided the opening of the country, they were baptizing, marrying, and burying our ancestors — and creating records of these events. Any search of a locale in the Family History Library’s online catalogue should include an in-depth look at church records. Not all of these are indexed, but they are worth the time required to read through them. I have found that many Catholic parish registers will cross-reference a baptism with a later entry of a marriage. Pure gold! Of course pay close attention to sponsors of baptisms and witnesses for marriages and funerals, as these people are often family members.

If your ancestors lived in large metropolitan areas, you may feel overwhelmed by the number of churches to search. All eight of my great-grandparents were scattered across Milwaukee, Wisconsin, in 1900, and six of them were Catholic. But there were 38 active Catholic churches serving the Milwaukee population at that time — entirely too many rolls of microfilm to scroll through, most of which have not been indexed. But, tucked inside the front of the Milwaukee City Directory for 1900 is a wonderful map of the city at that time, with all churches identified. Then it became a simple job of using the address listed in the city directory for each family to locate the nearest Catholic church on the map. One family was not in the directory (as it did cost a small amount to be included, and these were poor folks indeed), but the 1900 census form lists street names and numbers. Thus I obtained their address as well, found the closest Catholic church, and voilá, I was rewarded with exact death dates for two of my great-grandparents and the marriage date of one of their daughters.

If your ancestors didn’t live in large cities, you won’t have to jump through as many hoops, but sometimes it can be tough to track down old records that have not been microfilmed. If you know the religion, but you can’t find church records for that denomination online or through the Family History Library, call a church that exists today in the appropriate town or county. Explain what you are seeking, and ask if their records go back that far. If the answer is no, ask where they might be archived. (In one case, I found early Wyoming records now housed in Minnesota!) If the answer is yes, offer to pay for a search in as specific a block of time as possible.

When conducting your ancestor search, remember that births, marriages, and deaths — sometimes for many generations when families weren’t on the move — might all be available in one place — the local church. If you would like help in finding that church and determining what records are just waiting to be discovered, consider contacting a genealogy research service. The professional genealogists at RecordClick are experienced genealogy researchers in this field of study and can help you trace family trees using church records.