A RecordClick family history researcher takes a quick look at who owned the palace where the Kim Kardashian and Kanye West wedding is taking place. The genealogy of this Italian family is amazing. They were Tuscany’s rulers and politicians for over two centuries.

This family history researcher wants to be at Kim Kardashian and Kanye West’s wedding at Forte di Belvedere in Florence, Italy . Yup. That’s where I want to be this coming weekend.  I want an aisle seat so I can be with Kimye (as they are called) overlooking the Arno River, as they add to their family tree. Historic. Gorgeous.  Ancestor search galore!

OK.  So Kim K didn’t invite me and neither did her mother. This genealogist in New Jersey says “fuggedaboutit.” Just because I wasn’t invited doesn’t mean I can’t do family history research in Italy. I will do my genealogical search and know everything about the family who built the darn fortress where the Kardashians will be having the wedding.  So there.

Much like how the Kardashian family today rules the news, the Medicis were front and center in Florence.  They were the family that ruled the universe in Italy.

Ya hear me, Kim and Kanye.  I’ll be with you in spirit.

But I’m focusing on the real genealogical search gold.

This family history researcher in New Jersey says to check out da place:

Built in 1590-95 by Gran Duke Ferdinando I de’ Medici, it was built on the south side of the Arno River. He built it to protect the center of government in Florence, the Pitti Palace and the south end of the city. This Renaissance fortress also showed everyone the power of the Medici family.  It is said to have held the family treasury and to have provided a shelter for the Grand Duke in case of emergencies.

There are secret passageways to the Pitti Palace through the Boboli Gardens and there is a connection to the Palazzo Vecchio with the Vasari Corridor.  (Maybe Kim and Kanye will escape into their limousine this way?)

The full name of the castle is the Fortezza di Santa Maria in San Giorgio del Belvedere, but it is more commonly known as Forte Belvedere.

Now all of you genealogy researchers, we’re going to peek into, as a family history researcher in New Jersey might say, the noblest family in that region of Italy.  It is some family tree and you don’t have to do a faraway ancestor search.  Those Medicis all stayed pretty close to home for most of what we see in an ancestor search. A few moved to France or England.  And a genealogical search in Italy shows a few ended up in Rome…  Well, that isn’t so far away…

Now this family history researcher will let you meet the family.  May we present:  The Medicis. 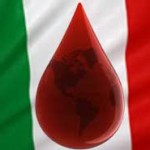 They began in the 12th century and weren’t rich.  Yet, for more than two centuries, they ruled Tuscany.

By the 13th century, they had become successful as bankers.  Genealogical research shows that the  Medicis helped a friend get the Pope job and were rewarded with business for their bank. At the end of the 13th century, one of the Medicis served as Gonfaliere of Florence, a high political office.

By the 14th century, the wealth and political influence of the family had grown more.  Salvestro de’Medici led a revolt of the common people.  After that, he took over as ruler in Florence but became a dictator.  The genealogical research shows that he didn’t do so well for his family.  He was banished from Florence in 1382.  A genealogical search in Italy will show the decline of the family fortune at this time until Giovanni di Bicci de’Medici restored things and increased the family’s fortune so that they became the wealthiest family in Italy–some say in all of Europe.

He was another Medici who was made Gonfaliere.  This was in 1421.

Giovanni’s son Cosimo (il Vecchio, or the first) was the family all-star.  Cosimo was in, then out, then in again as he struggled politically with another Florentine power-family, the Albizzis. This family history researcher has found that upon winning, Cosimo il Vecchio became a life-long ruler who helped Florence prosper.

Cosimo  il Vecchio was a culture vulture. Though he lived simply, he amassed a huge library and supported the arts. An ancestor search shows that through him and his son Piero, and his grandsons Lorenzo and Guiliano, the Medicis continued to maintain Florence as the cultural center of Europe.  They supported many artists including Brunelleschi, Donatello, Fra Angelico and more.

The latter Medicis, the grandsons, were tyrant rulers but continued to support the arts.

When the French invaded Tuscany, the French drove out the Medicis.  But, the House of Medici was welcomed back and restored when the Spanish invaded.  There were many additional Medicis who ruled Florence, some given titles of Prince, Duke and Grand Duke.   One family member became Pope Leo X and another became Pope Clement VII.  The family tree shows dotted lines indicating that there were even some illegitimate sons who got in on the ruling business.

Though not heirs to the House of Medici, the Medici daughters did well for the family in the prestige department. Catherine de’ Medici, married Henry II and became Queen of France.  Maria de’Medici married French King Henry IV and had daughters who became a Queen of Spain and a Queen of England.

One of the Medicis, another Cosimo, built a new office building to house the government administration.  The name of that building:  the Uffizi, which is now the well-known art museum.  The Medicis bought the Pitti Palace and handed it down to others in their family tree.

Sound like a ruling family?  Well, by the late 1600s, family history research shows that after Ferdinand II, another Medici descendant, the economy in Florence slowed.  By 1737, Austrian troops occupied Tuscany and Gian-Gastone de’Medici, who had no male heir, became the last descendant of the Medici family to head the House of Medici.   The reign was over.

So, family history researcher, do you think the Kardashians will continue to rule the tabloids, the way the Medicis ruled Florence?

Well, renting the the Fortezza di Santa Maria in San Giorgio del Belvedere for a reported $410,000 might make them feel like the Medici family for a long weekend.  Let’s see what happens afterwards…