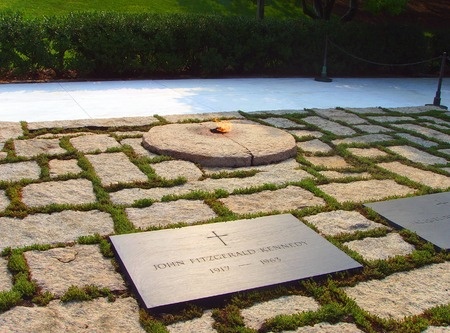 Genealogists might think that Arlington is the go-to place for prestigious military burials. With a little digging, the family history researcher will find that the eternal flame burns there for many more. A wide variety of people are buried there and for those doing a genealogical search for African American ancestry, there are amazing stories in these hallowed grounds.

Family history researchers might want to note that Arlington National Cemetery with 250,000 graves in Arlington, Virginia is now 150 years old.

Many genealogists will immediately think of the eternal flame that is there. The tomb of the Unknown Soldier will likely come to mind of the family history researcher. Those doing an ancestor search in America of the 1960s will no doubt have the image of President John F. Kennedy’s rolling casket and know of his 1963 burial in Arlington. Many will just happen to know the cemetery is open 365 days a year.  A family history researcher might recall the stoic dedicated soldiers who guard the everlasting flame.

Arlington is the most noted national cemetery of the 131 nationally maintained military burial grounds in 40 of the American states.  (There are also 33 soldier’s lots and monument sites and numerous state-maintained veterans’ cemeteries.)  For the family history researcher, access to these records is good.  There are federal websites that help the genealogist with ancestor searches.  On-site visitor access is well run. When the family history researcher searches for the tombstones and burial grounds of those family tree members who have served in the military, it may often produce results.

Things are well organized at Arlington. One example of this is in the attention given to those family members who are burying a relative at Arlington. For them, there is special customer service center.

Not everyone who is buried at Arlington National Cemetery was a soldier. The cemetery is burial ground for an amazing and interesting array of people. Among them:

How does one get admitted?  The paperwork process to get “into” Arlington seems as rigorous as a college application. First, there is validating paperwork that must be completed and proof that must be submitted for admission. Most important, obvious and final: One must not be alive.

The family history researcher will find that, originally, it was a plantation estate in Virginia overlooking Washington, D.C.  The property was owned by Martha Washington’s grandson, George Washington Parke Custis, son of John Parke Custis, Martha’s son by her first marriage. (Did you know she was married once before George?)

Martha’s son John Parke Custis died when his son was 3 and this 1100 acre property was left to the young child. The young child became a ward of George Washington, who later adopted him. Then, when the adopted grandson was older, he wanted to honor George Washington by naming this inherited property Mount Washington. But instead, the family settled on the name of another ancestral property in the area and called it Arlington.

George Washington Parke Custis built the house at Arlington between 1802-1818. For years, it was called the Custis-Lee House. It is now called Arlington House. It still stands today and is maintained by the National Park Service. He and his family lived there and he and his wife were buried together on the property in 1853 and 1857. The graves are still there and are marked. Custis and his wife had only one surviving child, Mary Anna Randolph Custis. This child married her distant cousin, Robert E. Lee, a West Point Graduate and military man who became a well-known Civil War General. During most of her lifetime, she lived on the property while Robert E. Lee travelled for battle and business.

Upon the death of her father, George Washington Park Custis, Mary Anna inherited the property including Arlington House. She also inherited many slaves who worked on the property.  Robert E. Lee did come back from his travels for a longer period of time to live. During this period, he fixed up the house, which had become run down while he was away.  Mary Anna’s father’s will also stipulated that upon her death the property should pass to her eldest son, George Washington Custis Lee. Her father’s will also sought to educate and free the slaves who worked on the property.

Things were fine at Arlington until 1861 when the neighborhood began to go downhill, so to speak. As Virginia seceded from the Union and war began, the area became obviously unsafe.  Robert E. Lee and his family left the property, leaving most of the slaves there. The slaves continued to maintain the property throughout the war. (Exactly how they did that has to be an important genealogical search angle and, hopefully, is a preserved part of the descendants’ ancestral history.)

The Arlington estate was confiscated by the federal government when property taxes levied against the property were not paid in person by Mrs. Lee. (A curious point for the family history researcher searching land records, no?) The property was then offered for public sale in 1864. It was purchased by a tax commissioner for “government use, for war, military, charitable and educational purposes.”

According to the Arlington website, the family history researcher will see that “Arlington National Cemetery was established by Brig. Gen. Montgomery C. Meigs, who commanded the garrison at Arlington House, appropriated the grounds June 15, 1864, for use as a military cemetery. His intention was to render the house uninhabitable should the Lee family ever attempt to return. A stone and masonry burial vault in the rose garden, 20 feet wide and 10 feet deep, and containing the remains of 1,800 Bull Run casualties, was among the first monuments to Union dead erected under Meigs’ orders. Meigs himself was later buried within 100 yards of Arlington House with his wife, father and son; the final statement to his original order.” 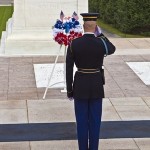 A fascinating sight for the family history researcher is the changing of the guard at the tomb of the Unknown Soldier.

When the property was seized in 1884 for the non-payment of taxes, the 17.5 acre tract was also seized.  The former slaves had no proof of ownership. This happened to be the parcel of land that was later given by the Federal government to newly freed and escaped slaves to create a place to live and work.

Genealogists will find that during the Civil War, the federal government gave land to more than 1100 slaves to create a freedman’s model community. The government called these people “Civil War Contraband”.  They came to the property from the property itself, Virginia, Maryland and the surrounding areas. They lived and worked on a tract of the property which is said to be located in the vicinity of the current amphitheater. They developed a full town with church, school, hospital and homes, all surrounding a lake. Many residents worked on local farms to help sustain both income and food in this village. It was depicted by written and oral histories as a successful community.

With that purchase, the property of the freed slaves’ village was included. The people of the village were given a small financial settlement and sent away. Their experimental model freedman’s village was torn down in 1900.  A small model of the village on display at Arlington House is one of the only reminders. The graves, however, of some 3639 people of the model freedman’s village remained—and still remain—at Arlington. Each grave, originally marked with the word “Contraband” on the tombstone, was replaced over time and eventually marked with the more respectful “Citizen” or “Civilian”.

A family history researcher will find the stories of some of Arlington’s freed slaves online. One person in particular, James Parks, was born a slave on the Arlington Property in the early 1800s. He lived and worked there for his entire life–through the Civil War and beyond as a free man. He buried the first war dead at Arlington and continued to be of service throughout the Civil War. He died in 1929 at age 93, still a resident of the property and he is buried on the grounds at Arlington National Cemetery.