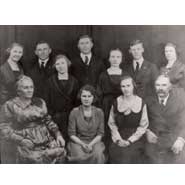 Throughout the ages, there have been difficult family trees to figure out. Sometimes marriages involve people who are already related – some closer than others. King Tutankamun (“Tut”) married his half-sister Ankhesenamun when she was 13; according to the Bible, Abraham wedded his half-sister Sarah; Emperor Claudius hooked up with his brother’s daughter Agrippina the Younger; and as Norse legend has it, Siegmund tied the knot with his twin sister Sieglinde, as was memorably portrayed in Wagner’s opera Der Ring des Nibelungen (the Ring cycle). But let’s face it, nothing compares to the genetic genealogy blockbuster scene in Roman Polanski’s Chinatown,” when Evelyn Mulwray (Faye Dunaway) cries, “She’s my sister and my daughter!” to Jake Gittes (Jack Nicholson). Good news (or perhaps bad) is that this blog is not so salacious in topic, but it does address the difficulties of tracing family trees when siblings of one family marry siblings of another family, or cousins marry cousins. Professional genealogist Joan Shurtliff walks you through this genetic genealogy minefield of blended families.

There is a scene at the beginning of the movie Gone With the Wind when Scarlett O’Hara, who is eyeing Ashley Wilkes as a prospective beau, finds out that he is going to marry his (we don’t know how distant) cousin, Melanie. Thus begins a kinship web that family historians can relate to. It is also one of the reasons that researchers need to include siblings of ancestors in their search. As uncommon as it may seem, confusing relationships can happen fairly often and have in almost every family.

I call it “being related twice” – once by blood and once by marriage, and it has happened in my family. I have mentioned in earlier blogs that my dad came from a close knit German community in Des Moines County, Iowa. Before railroads, travel wasn’t easy, so families usually stayed fairly close to home. For a number of reasons families often had eight children or more. Lots of neighbors, lots of children and lots of marriages.

Herman RIEPE and Anna ENGELBRECHT. They were married in Germany and came to the United States in about 1850. Their children:

Marriages can drive family historians a little bit crazy because simple family relationships get complicated in a hurry. When siblings of one family marry the siblings of another family, it can get confusing. If a marriage with children involves the death of a spouse, and there is a subsequent re-marriage, then blended families come into play – blended families are not a 20th Century invention – and diagrams may be needed.

The second scenario is not so simple. It involves two sisters, two spouse,s and three marriages. The oldest daughter of Herman Riepe, Anna Maria Riepe married John F. Roedel in 1870. Her sister, Hannah Louisa married William Ernest Breuer in 1874. John died in 1880 and Hannah died in 1883. Both families are found in the 1880 Census:

Anna and William – sister-in-law and brother-in-law – married in 1885. Both Anna and John and Hannah and William had children who were cousins, so when Anna and William married, the cousins also became step-siblings. Then came their children. From the 1900 U.S. Census for Clay Township, Lafayette County, Missouri:

Some of the older children left home by the time the 1900 Census was taken. But from the dates and remaining family, we know that:

Often complex, genealogical relationships can help explain how family members interact with each other. If you are a researcher, family historian, or genealogist, and you need help with these complex familial relationships, contact RecordClick to help you through a difficult area of lineage research. Our experienced and professional genealogists can assist in determining relationships, helping research elusive relatives, trace family trees or family histories, both in the United States and overseas. We’re only a mouse click away and the initial consultation is free.