It takes a village. For President Abraham Lincoln, it did. Our RecordClick genealogist Joan Shurtliff found that the land of New Salem, Illinois is a place recreated to tell the Lincoln story.

Sometimes it is good for the genealogist – even this RecordClick genealogist – to get away from the computer keyboard and do some exploring. A couple of weeks ago, I attended the conference of the Federation of Genealogical Societies in Springfield, Illinois.

Now this is the Land of Lincoln and I’m sure the local residents have grown weary about the subject of Lincoln. Yet, the places I visited did an excellent job of presenting his life and times. These places remind us that when we visit the places of our ancestor’s lives, we gain an understanding of who they were and what influenced them.

The genealogist will find that history books do teach a good deal about Abraham Lincoln–the man. For this genealogist, it was that visit to New Salem, Illinois and a recreated village that comprises an historical park near Springfield that provided for me the insight into this young, poorly educated individual who found a place where he could experiment, fail, discuss, laugh, learn and grow into the adult who changed the course of this nation.

So, intrepid genealogist, let’s look at the place. 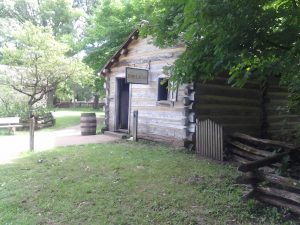 New Salem, Illinois is built on the dream that the Sangamon River could be navigated. It was never a big place and flourished for a bit more than a decade. New Salem’s first highways were rivers.  If a boat could get there, this place provided the potential to support a population.

There were approximately one dozen residences – cabins and houses. Then came the businesses that were necessary for the need of the community. There, the genealogist will see depicted, that a cooper constructed barrels, a blacksmith shoed horses, a general store and grist mill supplied cloth, sugar and flour. The school and church shared a building. There was a postmaster – Abraham Lincoln served in this capacity, for a time.

When the genealogist looks deeper, one sees the many activities–including a debate society–that had been available. There were also many people who, with their life experience, provided the informal education to Abraham Lincoln and provided him with connections which helped him later in life.

By the 1840s, the village of New Salem, Illinois was gone.

In part, the limited access from the Sangamon River pushed the residents, including Lincoln, to new places. This hamlet which was less than a half-mile long and it faded away… almost.

After Lincoln’s death, people craved to know more about whom he was and what influenced him. So, somehow, New Salem, Illinois never completely vanished.

In the early 1900s, William Randolph Hearst lectured in the vicinity. Hearst made a trip to what remained of New Salem and then purchased a sixty-two acre tract. He conveyed this property to the local Chautauqua Association in a trust. Following this, the New Salem property, with additional financing and research, became the accurately restored village that is now an Illinois State Park.

The genealogist will find that this state park covers just about everything: who lived in the village, when they came, where they lived, what they did, and when they left. And it also covers: Abraham Lincoln.

You, too, can recreate the places of your ancestors—or at least find and learn about them.