When The Revenant showed the wilderness in the film, who knew it might lead to a great source of information for the genealogist. Our professional genealogist tells about her latest library find–out there on the Great Plains.

When a genealogist searches for information, one might feel lost in the wilderness. Yet, such genealogy research has led this RecordClick genealogist in directions never imagined.

This professional genealogist has been travelling across the northern plains since I was child and I finally stopped at another unusual outpost for the genealogist – the Museum of the Fur Trade– located three miles east of Chadron, Nebraska on U.S. Highway 20. Founded in the late 1940s, this museum specializes in the era of Plains history that spans from the mid-1700s to mid-1800s.

The museum is well known locally. But this genealogist never realized, until now, the scope of its holdings.

History and genealogy intersect out here on the Great Plains where trading goods for furs provided products for the U.S., Canadian and European markets. The genealogist will find that the early trappers and traders often were French, Dutch, English or Scottish.

These traders and their companies constructed forts and trading posts throughout the Great Plains in their quest to obtain animal hides including beaver pelts from the Native Americans which were made into hats, coats and blankets to be sold throughout the U.S. and around the world.

When one thinks of such Great Plains exploration, the historic 1803 Lewis and Clark Expedition might come to mind. Yet, Lewis and Clark were not the first to venture out here. Many other fur trading companies, including the American Fur Company, Hudson’s Bay Company and the North West Company, were formed in the 1700s to trade with the Native Americans. 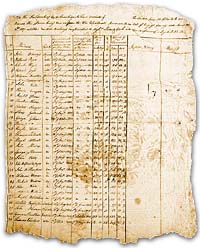 A roster of men who were trading on the Great Plains.

The astute genealogist will see and know that this was a business—and a business means records.

For the genealogist, this industry is far from a vast wilderness.

The Museum of the Fur Trade has exhibits which provide insight into the history of this American industry. Often on display are samples of the goods that were traded, the clothing of different Native American tribes, and the artifacts used by the early residents of the Northern Plains. A genealogist and the visitor are even able to peek into a realistic replica of the trading post established in 1837 by trader James Bordeaux for the American Fur Trade Company.

The lucky genealogist may catch an exhibit that includes costumes from  the film The Revenant donated by the makers of the 2016 Oscar-winning film starring Leonard DiCaprio as Trapper Hugh Glass The Museum of the Fur Trade staff served as historical consultants for this period film.

When searching for genealogy information, a professional genealogist from RecordClick will help you tell your family history and get the details of your ancestry.