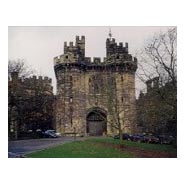 Time to take another trip across the Pond with board certified genealogist Joan Shurtliff as your guide. This time, Joan delves into the multiple court systems that have meted out legal rulings in Great Britain for hundreds of years. The various courts – Criminal, Church, Eyres, Assize, Crown, and others – have generated untold numbers of records, many of which can be accessed by genealogical researchers to help trace family history. Joan explains the different courts throughout the different time periods, what the courts cover in their records, and the best ways to access the records. All rise.

English courts have been interesting to me. The idea of the lead attorneys and judges wearing robes and funny white wigs is hard to imagine here in the United States. Tradition, though, is important in Great Britain. As a genealogist, British courts are even more interesting because various courts have been handling disputes for hundreds of years, and the records can provide insight for genealogists who want to trace family history.

The earliest courts were called Common Law Courts and were not very efficient, but there is usually more than one way to accomplish a goal. Individuals unhappy with the court system could petition the courts for justice to be done. Consequently, a system of courts to handle the various types of cases evolved.

The most common courts were:

When the Eyre system ceased to function well, a new system called Assize Courts was created. Dating from the 1300s, circuits were created with judges from the courts at Westminster visiting each county on a regular basis. The earliest role of the judges was to review certain property disputes. The justices’ powers gradually expanded to include criminal cases. Assize Courts were replaced by Crown Courts in 1971. Most Assize records are now at The National Archives (TNA), although many have been lost or destroyed.

The Assize circuits did not include London. Criminal jurisdiction in London was handled by three commissions:

Remember, in England people used to be incarcerated for any of a number of offenses. Think Charles Dickens. There are many prison lists, and they can be found in a number of places:

There is one final area of the English court system that may be of interest to the genealogical researcher looking for individuals who died under unusual circumstances. The office of coroner was established in 1194, and until the 1800s most coroners were elected. In 1888, counties were divided into districts, with the coroner becoming an appointed position. Although many of the coroner’s records have been lost or destroyed, those that exist are opened to the public after 75 years. The records are at TNA.

To find your ancestors, don’t forget to check the newspapers. Often court happenings and legal notices were published.

It’s important for family genealogy researchers to remember a couple of things: Many of the early court records, beginning in the late 1300s, are found at TNA, but they are not very well organized, and most are in Latin. Hence, researching them for genealogical information is difficult.

When you are conducting ancestry searches, especially if you are researching British genealogy, don’t limit your genealogical research to just a couple of resources. Expand your ancestry search horizons; put a British genealogy stamp in your family search genealogy passport to find your ancestors. Try new avenues. Do what professional genealogists do and tap alternative databases, court records, legal notices, newspapers, et al. Do what genealogy ancestry services do when they trace family history – get creative.  If you do hit a stumbling block, consider reaching out to a genealogical service. RecordClick is a full-service genealogy ancestry service with professional genealogists living and working in Great Britain.

Joan Shurtliff is a board certified genealogist. She is a member of the South Dakota Genealogy Society (SDGS), where she received the Outstanding Member Award for 2011. She currently serves as a Quarterly Editor for the SDGS. Ms. Shurtliff has ties to several early settlers and 1870 Nebraska homesteaders.