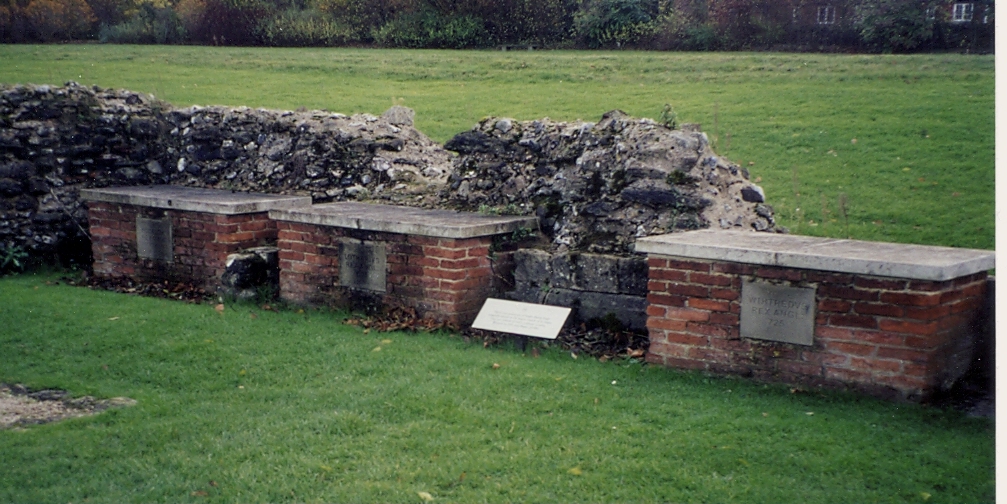 My husband and I are British genealogy research buffs, so during a visit to England, we visited Canterbury and the World Heritage Sites there. In close proximity were Canterbury Cathedral, St. Augustine’s Abbey, and St. Martin’s Church. As we toured the area, we came upon the four graves pictured above. The marker says: “These four graves are of Anglo-Saxon kings originally buried in the Saxon church of St. Mary. They are Edbald (d. 640), Lothaire (d. 685), Wintred (d. 725) and Mulus (d. 686).” There they were – the names and dates of individuals who knew the land almost 1500 years ago. A vital record. The antiquity of it all.
(Photo by Joan Shurtliff 2002)

Even though it was November, the grass was a deep green when I visited England a few years back. As history buffs, my husband and I looked forward to a visit to Canterbury and the World Heritage Sites there. In close proximity were Canterbury Cathedral, St. Augustine’s Abbey, and St. Martin’s Church. As we toured the area, we came upon the four graves pictured above. The marker says: “These four graves are of Anglo-Saxon kings originally buried in the Saxon church of St. Mary. They are Edbald (d. 640), Lothaire (d. 685), Wintred (d. 725) and Mulus (d. 686).” There they were – the names and dates of individuals who knew the land almost 1500 years ago. A vital record. The antiquity of it all.

When doing genealogical research for vital records in Great Britain it helps to be able to tie into one of the numerous noble families. It doesn’t even have to be the current royal family. In the early days, there were numerous small kingdoms with royalty embarking on the usual plotting and intrigue. Unfortunately, royalty doesn’t seem to be in my blood. There were many more people struggling to get by.

Searching vital records to find your ancestors, whether you can or can’t tie into a prominent household, needs to begin in the usual way with what you know. As you conduct family genealogy, try to place the ancestor in a specific place at a given time. One of the first lines of British genealogy research is vital records. Every locale is different. A key date to remember in Great Britain is 1837. That is when England and Wales instituted government registry of births, marriages, and deaths. Prior to that, records were kept at parish churches.

Mid-1530s – Henry the VIII created the Church of England and was made Supreme Head of the Church. The roots of the Church of Ireland were also formed.
1560 – Scottish Reformation framed the Church of Scotland
1600s – Non-conformist religions began to take root.
1837 – England and Wales instituted government registration of births, marriages, and deaths. Compliance was not mandatory.
1845 – Northern Ireland began government registration of non-Roman Catholic marriages.
1855 – Scotland started statutory governmental registers for births, marriages, and deaths. Prior to this date, registration was by parishes of the Church of Scotland. The initial registers included a good deal of information including parent’s marriage and siblings.
1856 – It was determined that there was too much information on the birth registers in Scotland, so parent’s marriage and the listing of siblings were removed.
1861 – The Scotland registry reinstated the date and place of the parent’s marriage.
1864 – The government registration of births, marriages, and deaths began in Northern Ireland.
1875 – England and Wales instituted penalties for non-compliance in the registering of births, marriages. and deaths.
1974 – The British counties were restructured in 1974.

The registers are just that – ledgers with vital information. Even now, the “official” marriage is a civil ceremony that takes place in the civil registry office or in the presence of a civil registrar. Doctors or healthcare providers register births and deaths on a regular basis. There are more than 600 registration districts in Great Britain, and the vital records work their way up the paper pipeline to the General Register Office (GRO). Poring through this information will certainly keep a genealogical researcher busy.

Before the registry system was created, the churches were the keepers of the vital records, and that’s why it helps British genealogical researchers to know both the location and the religion of their ancestor. While Catholic Church and the Church of England were the predominant religions, other religions – including Jewish, Methodist, Presbyterian, and Quaker – were also present. Members of these religions are often called non-conformists. The vital records of alternative religions may be located in a number of places. The best place for a genealogist to begin the search may be The National Archives. Keep in mind that some non-conformist ministers may not have given high priority to keeping vital records.

For British genealogical researchers, there are a number of websites that carry vital records and indexes from Great Britain, most notably FamilySearch.org, Findmypast.com, Findagrave.com, GENUKI.com, and Ancestry.com. Still, not all the records are online.

Tracing ancestry in the UK will have genealogical researchers wandering through the various sources looking for vital records, and this can be challenging. If the ancestor search seems to be a bit overwhelming, you may consider using a genealogy ancestry service. RecordClick has experienced, professional genealogists in Great Britain who understand the system and know the best places to look to help you in tracing ancestry and to find more information about that illusive ancestor.