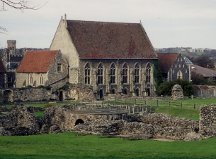 One would think that inhabitants of the United Kingdom would speak “English” – and so they do – but they also speak Cornish, Cumbrian, Gaelic, Manx, Scots, Welsh, and quite a few more hard-to-understand languages and regional dialects, all of which may present barriers to your British genealogy search. In an upcoming series of blogs, we will provide ideas and strategies to help you with your own British ancestor search. But at the end of the day, you may jolly well want to consider RecordClick as your genealogy ancestry service to help you translate British English to American English. Pip pip, cheerio and all that rot! (2002 photo by Joan Shurtliff)

“For my part, it was Greek to me.”
~ William Shakespeare

The goal of this set of blogs is to help with the, albeit very abbreviated, history of Great Britain and provide ideas and strategies for doing British genealogy research. RecordClick has expert genealogical researchers in the UK who can provide you with genealogy ancestry services that will help with your British genealogy search, especially with the strategy of ancestor search outside of the U.S. And even though our countries speak the same language – well, sort of – RecordClick ancestor search specialists can help you maneuver through the language and terminology differences between the Brits and the Yanks.

When it comes to doing British genealogy research in the United Kingdom, the same basic rules apply to both the United States and the UK. Start with what you know and work to what you don’t know. Start with the present and work back in time. They do things the same way in Great Britain as we do in the United States – again, sort of. Then again, they have had more time to figure out a system that suits them best and have developed their own terminology.

Two things to keep in mind when working on your ancestor search in Great Britain:

Late 500s – Christianization began of what is now England.
597 – The First Archbishop of Canterbury took office.
7th Century – Christianity was introduced into Scotland.
9th Century – Kingdom of Scotland was created.
Late 9th Century through early 1100s – The Anglo-Saxon Chronicle was written.
1066 – William the Conqueror invaded England.
1086 – The Domesday Book, a record of a property survey of England and parts of Wales, was completed.
1282 – England conquers the Principality of Wales.
1348 – Bubonic plague arrived in England from the European continent. It killed about one-third of the population.
Mid-1530s – Henry the VIII created the Church of England and was made Supreme Head of the Church. The roots of the Church of Ireland were also formed.
1560 – Scottish Reformation frames the Church of Scotland.
Early 1600s – Colonization of the area of Northern Ireland, also called Ulster, by people from England and Scotland began.
1700s – Welsh Methodist revival instigated.
1700s – Ulster Scots began emigrating to North American.
1707 – Scotland became a part of the Kingdom of Great Britain.
1707 – Wales became a part of the Kingdom of Great Britain.
1800s – Ulster became a center of industry.
1801 – Wales became a part of the United Kingdom.
1837 – England and Wales instituted government registration of births, marriages, and deaths. Compliance was not mandatory.
1888 – The first attempt to create a standardized system of local government in England was imposed.
1894 – An act created a second tier of local government in England.
1920 – Self-government was given to six of Ulster’s northeastern counties.
1921 – Ireland was formally partitioned into Irish Free State and Northern Ireland. There is a strong influence of both Protestants and Catholics in Northern Ireland.
1972 – The Local Government Act of 1972 simplified the local government system in England.
1974 – The British counties were restructured in 1974.

The settlement of North America seems simple compared to that of Great Britain. Britain had people coming in from all over, including Rome and what is now Scandinavia, plus local land disputes. Combine the complicated history with a variety of languages in various states of evolution, and British genealogy can become quite challenging.

Among the earliest written documents is the Anglo-Saxon Chronicle. Written over an extended period of time by a variety of people, it is a beginning to recording events of the day. There are nine different manuscripts located in various repositories in England.

The Chronicle is a history mentioning people and occurrences. The second early document of note is the Domesday Book, a property survey. Keep in mind, individuals mentioned in these tomes most likely had more importance and money than the average citizen.

Where we have archives, libraries, historical societies, and museums in the United States, the United Kingdom has archives, General Register Offices, the Home Office, and more. In a series of upcoming blogs about conducting British genealogy, we at RecordClick will try to explain family search genealogy sources available in Great Britain for use by genealogical researchers, which ones may be the most helpful in British genealogy research, and how to access them.

The genealogical services provided by RecordClick’s ancestor search specialists can assist in your British genealogy search, help you understand how the different repositories of information work, and present ideas to help you break through your British barriers.