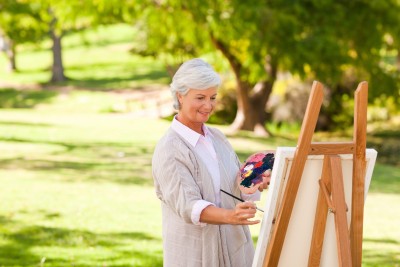 A genealogist is like a painter. They add dimension and hue to their family pictures by utilizing media such as census, land records (deeds), probate records, etc. Joan Shurtliff, a Certified Genealogist, lends her research “eye” to the art of family history painting by using land records not only to add color but to include the dimension of time.

Genealogy research is a bit like painting a picture. The more information obtained, the more hues and dimension the picture has. Census records are an outline; they are the beginning of your picture. Censuses place an individual or family in a given place at a specific time, but they have their limits. If a family moved two or three times in a ten-year period, those other residences may be unknown. Both Nebraska and South Dakota, the two states I know best, had some off-year censuses – South Dakota more than Nebraska – but censuses are still limited in their information.

Land records broaden the picture of a family by adding strokes of color. I like land records. I like finding a specific piece of land on a map. I like visiting a place where an ancestor lived. It gives me a sense of who the person was and what he or she had to deal with. A lot of people seem to shy away from working with land records. I’m not sure why. It could be the process of finding a deed. It could be making sense of the land description. It could be the challenge of looking through big, old books and documents with some almost indecipherable handwriting.

Bear in mind, land records, especially deeds, can be some of the most valuable tools of a genealogist. I must admit that working with land records in the prairie states of Nebraska and South Dakota is easier than in areas that were settled earlier. As with most things, deeds have evolved. Many early deeds were handwritten in language that is now considered arcane and cumbersome. By the time the two states were being settled, the language was changing. A big improvement came in the late 1800s when the use of typewriters increased. Now, there are usually standardized forms with blanks to be filled in.

Land records add a time element to your picture. When was the property purchased? If the family owned a farm, did they add, reduce or move their holdings? If the head of the household was a merchant, the same might apply. Did the family come into an inheritance, sell their home and move into one more befitting their new stature? Or did they face a calamity, such as a stock market crash or family disaster, and have to move into a simpler residence? Or did the family live comfortably on the same property for many years – possibly passing it on to the next generation?

Deeds not only provide dates, but may also include information on family relationships, dower rights, and slave ownership. One set of my grandparents were able to purchase a house because of an inheritance my grandfather received. The date of the deed provided the time frame for the couple to inherit the money, move from one town to another, have a child, and purchase a house. These are broad strokes to add to a family’s history.

Finally, there is the land itself. Was the lot a business or a residence in town? Was it located in a “good” neighborhood? Or was the land a farm? How good was the soil for raising crops? What schools and churches were nearby? Was it located near other family members?

Don’t just stop with the outline of your family picture. Add some color and definition by utilizing the dates and land descriptions included in land records. This information will help you with the answers to your lineage questions and will add more depth and richness of tone to your family portrait.

For help with your genealogy research using land records, speak to one of our professional genealogists today.