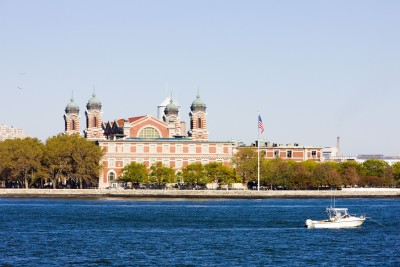 At Ellis Island, I see the faces – life-sized photographs looking at me. Around every corner there are faces. The pictures capture the young and old, individuals and families, the strong and the weak. Every photograph and immigrant name reveals something about its human subject, but they only tell part of the story, and I need to know more. I start with a name . . .

Ellis Island is a special place for genealogists and family historians. The halls are now empty of the stream of people arriving – some with little more than the clothes they were wearing – to become a part of life in the United States. The plaster and tile walls and hard floors that were built to withstand those millions of immigrants now echo with the voices and footsteps of visitors, many trying to understand what their ancestors went through on their journey to the United States and citizenship.

When I visited Ellis Island, I noted the displays of trunks, suitcases, and items left behind. I followed the route the immigrants took on their way to making this spacious and opportunistic land their own. And I saw the faces – life-sized photographs looking at me. Around every corner there were faces. The pictures captured the young and old, individuals and families, the strong and the weak. Every photograph revealed something about its subject. They told a story.

This is why I am drawn to genealogy. Every person in my family tree has dates and places where they were born and died. They each have a story to tell. Where did they live? What led them to the decision that the United States was a better place to live than where they were? What was the immigration process like? What barriers did they have to overcome?

Along with all those millions of faces are the names. As inspiring as the Statue of Liberty may have been for the immigrants on their way to Ellis Island, there also had to be a sense of apprehension. There were strangers to talk to and language barriers. Some immigrants kept their family names. Some elements of foreign languages did not translate easily into English; so names were misspelled or spelled by sound. Names got changed. Someone with a difficult last name may have decided to use something easier. Someone with a common last name may have opted for a name slightly less common. But there were all those names . . . millions and millions of them.

By 1892, when the doors of Ellis Island opened under the auspices of the federal government, the manner of dealing with immigrants had changed from earlier in the century. Because of the number of immigrants, the government was interested in who was coming into the United States. In the 1900 census, there were several counties in South Dakota where more than 80% of the population was either an immigrant or an offspring of an immigrant.

The peak year for immigration was 1907 with more than one million newcomers passing through Ellis Island. Legislation limiting the number of immigrants allowed into the U.S. was passed in 1924. With that, the focus of Ellis Island changed.

Finding search engines for passenger lists of immigrants processed through Ellis Island is relatively easy. Among the most popular are:

• The official Ellis Island website. It is free, but if there are differences in the spelling of a name, finding an individual may become problematic. Consider using different spellings of the name for better results. (FREE)
• Ancestry.com ($$$) has passenger lists into New York from 1820-1957. Again, if there are spelling issues an individual’s name may be difficult to find, so use various spellings.
• Immigrant Ships Transcribers Guild has more than 12,000 passenger manifests. It also has links leading to other websites with passenger lists or ship information. (FREE)
• One-Step Webpages: Stephen P. Morse is a computer guru with a genealogist’s heart. He has created a number of search engines for a variety of genealogic subjects including Ellis Island, Castle Garden and other immigration ports. Morse has developed an innovative method of searching for elusive names. It is difficult for a computer novice to explain, but suffice it to say it expands the results of other search engines. (FREE)
• Cyndi’s List is a website with thousands of genealogical links. One section is devoted to immigration and naturalization. (FREE)
• Of note, FamilySearch has started a project of indexing passenger lists.

If you are having trouble finding your immigrant ancestor or want to flesh out more information, consider contacting Record Click for assistance from our experienced genealogists. There are other records that can be of help besides ships’ lists: immigration and border crossing records; passports; citizenship and naturalization records; and emigration records from the country the immigrant left. As there was a process for immigrants to enter this country, there was also a process for them to leave their old country. We can help you find and make sense of the records and provide a glimpse of how your immigrant ancestors came to America.

Remember this: It starts with a name.