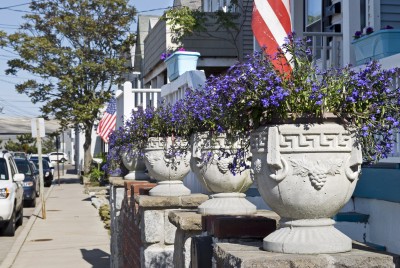 New Jersey isn’t called the “Garden State” for nothing. It offers a garden of earthly historical and genealogical delights to lineage researchers. It also offers a plethora of historical locations that are open to the public — museums, battlegrounds, farms, gardens, mills, churches, cemeteries, Underground Railroad stops, and a number of 18th and 19th century homes. What’s a major force behind New Jersey’s historic preservation? Keep reading – you’ll find out.

In my blog New Jersey – A Destination Location for a Research Vacation, I gave you a teaser of the depth and breadth of New Jersey’s rich past to tantalize Garden State historical and genealogical researchers and to offer helpful research resources. This time around, I am going to get a little more specific in regard to historical and genealogical societies and lineage organizations, all of which will enhance and enrich your family search path.

Let me just say first of all – I support 1st Amendment rights, so while I believe programs such as The Sopranos (HBO), Jersey Shore (MTV), and The Real Housewives of New Jersey (Bravo) can and should be produced, I also believe they are one-sided, depicting an unbecoming and unseemly side of New Jersey that is not up to par with the State’s venerable history.

New Jersey dates back to the early 1500s. Its involvement as a prime location for which Patriots fought valiantly during the American Revolution, as well as the fact that it is one of the original Colonies in America, are what make New Jersey an extremely important state to the inception of our Nation. Snooki, Jwoww!, and Tony may reign supreme on the airwaves, but they are not much more than debris on the Atlantic City Boardwalk when compared to the rich history of their home state.

When I started to research New Jersey and to absorb its significance to American history, I was struck by the many historical societies available in the state, as well as the plethora of historical locations that are open to the public — museums, battlegrounds, farms, gardens, mills, churches, cemeteries, Underground Railroad stops, and a number of 18th and 19th century homes. I discovered that several of these homes are owned or maintained by the New Jersey State Society Daughters of the American Revolution (NJDAR), which is part of the National Society DAR [NSDAR]. In some cases, NJDAR owns the properties; in others, individual chapters within NJDAR are the owners and/or curators.

The NSDAR was founded in 1890 to promote patriotism, preserve American history, and support better education for our nation’s children. Its members are descended from the patriots who won American independence during the Revolutionary War. With more than 165,000 members in approximately 3,000 chapters worldwide, DAR is one of the world’s largest and most active service organizations. New Jersey is home to almost 50 individual chapters.

Given the involvement of NJDAR in the preservation of New Jersey historical properties, I contacted NJDAR Regent Diane Argraves. I wasn’t surprised to find that Mrs. Argraves has a strong passion for our nation’s rich history and for protecting that history for generations to come, so much so that her State Regent fundraising event is Project Violet: Remembering our Patriot Heritage – Preserving Historic Landmarks.

Following its passion for historic preservation, the NJDAR is headquartered in the Watson House, which was built in 1708 by Isaac Watson, the son of Quakers who came to this country from England in 1684. The NJDAR restored the house in 1964, as part of the New Jersey Tercentenary Celebration. Located in Hamilton, the Watson house is the oldest house in Mercer County. It is open to the public for docent-guided tours on certain Sundays, during specific months.

Another of New Jersey’s famous homes is the Schuyler-Hamilton House Museum, which was built by Jabez Campfield in 1760 in Morristown. Dr. John Cochran, the Surgeon General of the Continental Army and personal physician of George Washington, was quartered in the house during 1779 and 1780. Cochran’s wife’s niece, Betsy Schuyler, was courted by Alexander Hamilton in the residence. Morristown Chapter of the NJDAR owns and maintains the Schuyler-Hamilton House. The museum is open on Sunday afternoons; tours may be made by appointment.

The DAR Van Bunschooten House was built in 1787 in Wantage and served as the manse for the Reverend Elias Van Bunschooten, a Dutch Reformed Minister. In 1971 a DAR member donated the house to the Chinkchewunska Chapter (a Native American word for “town on the side of a hill”), which set about to restore, refurbish, and redecorate the home. The house and outbuildings are listed on the National Register of Historic Sites and Places. The Bunschooten Museum is open on certain days between May and October.

The James and Ann Whitall House is located on the Delaware River in northern Gloucester County. The Whitall family built the house in 1748 and lived there for 114 years. During the Revolution, the house was converted into a hospital where Ann Whitall tended wounded soldiers (from both sides) after the 1777 Continental victory at the Battle of Red Bank. A DAR chapter was named for Ann Whitall; it along with the Red Bank Chapter donated antiques, and continues to maintain rooms in the house and serve as docents.

Last, but not least, the Buccleuch Mansion (also known as the White House Farm) was built around 1740 by Anthony White, and was occupied by the British during the war, due to its owners’ sentiments. Following the Revolution, Colonel Charles Stewart owned the house and played host to such prominent visitors as George Washington, Alexander Hamilton, General Kosciusko, General Gates, and John Hancock. Jersey Blue Chapter maintains the interior and furnishings of the Museum.

In addition to maintaining the furnishing of the Buccleuch Mansion, Jersey Blue Chapter is assisting the New Brunswick Free Public Library to locate descendants of the five New Jersey signers of the Declaration of Independence: Abraham Clark, Francis Hopkinson, John Witherspoon, John Hart, and Richard Stockton. For those who believe they are related to one of the five signers, the Jersey Blue Chapter has offered to assist with their research and to help complete the required paperwork to join DAR and Sons of the American Revolution (NSSAR) or Sons of the Revolution (SR), if they wish.

Any woman 18 years or older, regardless of race, religion, or ethnic background, who can prove lineal descent from a patriot of the American Revolution, is eligible for membership. DAR defines a “patriot” as one who provided service or direct assistance in achieving America’s independence.

For those of you who are interested in tracing your lineage to a Revolutionary War Patriot, or just want to know more about your family with New Jersey ties, here is a list of research resources to help you start the process. While there are many more historical societies in New Jersey, I selected ones that include one or more research resources such as libraries, archives, genealogies, local histories, ledgers, and maps, etc.

NJDAR Regent Diane Argraves’ Favorite Pick!
“My absolute all-time favorite source for lineage research in New Jersey is the Gloucester County Historical Society. You see, years ago Gloucester County encompassed mostly all of South Jersey. This is a must for anyone researching in South Jersey. I recall one instance when an individual called looking for a marriage record at Christ Church in Philadelphia, and for many years could not understand why the record was not there. I quickly suggested that it was probably Christ Church in Woodbury, Gloucester County, New Jersey, just on the other side of the river from Philadelphia. Case solved!

If you hit a stumbling block in your research, take heart – Record Click is headquartered in the heart of the Garden State. Record Click has expert genealogists who can help you through the lineage research process to attain important documentation you are seeking.