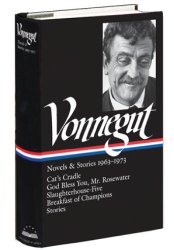 Many a genealogist remembers graduations—yours, mine, ours. One never forgets all that time spent cramming, exploring, and partying on the road to the coveted diploma. This is the time of year when all of that hard work and time spent studying is rewarded.

In America, family researchers know that many of our parents and grandparents attended college. For the genealogist, an attendance record and course of study are usually the only official types of information released from an institution of higher education.

This genealogy researcher, however, happens to like college newspapers as an additional source of information.  This week, this RecordClick genealogist will borrow a bit of the college career of author Kurt Vonnegut.

Born and raised in Indiana to Kurt and Edith Vonnegut, Kurt Jr. was the youngest of three children. His father and grandfather were both architects and young Kurt seemed destined for a career in math or science. Born in November 1922, future author Vonnegut had to be impacted by the depression. In 1930, his family was living in a $25,000 house at 4365 N. Illinois and the family had a servant. By the time the 1940 Census was enumerated, the Vonnegut family had moved to a $7,500 house at 49 West 42nd Street and the servant was gone.

A good genealogist can dig deeper. After graduating from Shortridge High School in Indianapolis in 1940, Vonnegut enrolled in Cornell University in Ithaca, New York. In an announcement that appeared in the October 29, 1940 edition of the university newspaper, The Cornell Sun, under the heading, “Cornell Sun Opens News Competition”, twenty-seven class members are listed as entering the freshman news board competition. One of the attending students was Kurt Vonnegut.

When Kurt Vonnegut, Jr. was at Cornell, he published early pieces in the college newspaper.

Vonnegut used the university as well as his high school newspapers to hone his writing skills. In the fall of 1941, he is listed on The Cornell Sun masthead as a news editor. Editorial page columns with his byline included “Innocents Abroad” and “Well All Right”.  His first column with a byline in May 1941 included jokes and a shout out to his high school:

The following week on May 1, 1941, Vonnegut changed his writing style in his “Well All Right” column entitled “In Which We Dare to Enter a Stronghold of Evil”:

“One of a group of party boys at Zinck’s suggested that we go over to the XYZ Club. Playing along like we knew what the XYZ Club was, we followed the gang.

“Down South Auburn Street, over the small concrete bridge, and through an unmarked side door, the six of us found ourselves in a small, windowless, heatless, rugless hallway, facing another door…”

With time and experience a genealogist can see how our ancestors can change, both outwardly with their appearance and inwardly with their thoughts and skills. How could the young Vonnegut have known in 1941 about the war time actions he would shortly witness that influenced his novels “A Cat’s Cradle” and “Slaughterhouse Five”?

By the 1942-43 term, Vonnegut was an Associate Editor of The Cornell Sun. After February 1943, his name disappears from the paper. In some of his last columns, he expresses his feelings about World War II and the young men serving in the military. In 1942, the Selective Service System changed from administrative selection to a lottery system. In December 1942, the draft age range changed from 21-45 to 18-38. Many young men, including Kurt, were forced to leave college and join the military.

For the genealogist, college newspapers can be a mixed bag. Some old college newspapers may be online. Others are not. The best thing to do may be to Google the name of the college with the phrase “newspaper archive”. The genealogist will find that the newspapers are a good way to learn which students were involved in the different activities and what was important to the students there at that time.

Want to get a higher education in your own family tree? Hire a genealogist from RecordClick so that our professional genealogy researchers can make your genealogical documentation easier, provide extra details about your ancestors and create a special family history.