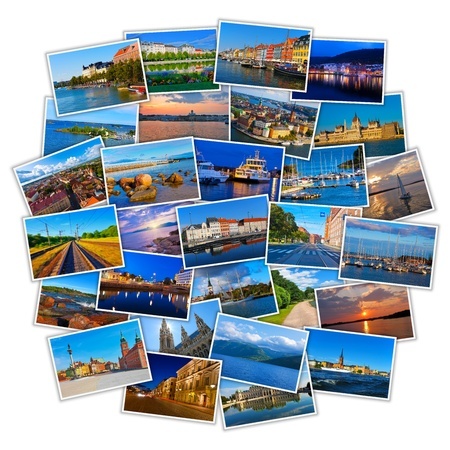 Postcards from the edge of time or anywhere have lots of info, even though they are the older form of a quick and compact communication.
You could say that they are yesteryear’s version of a text or a Snapchat combined. Our RecordClick genealogy researcher, or should we call her an InstaGrammy, tells us just how postcards can give new clues about time, place and more in your ancestry search.

Vacation time! Yeah! This RecordClick genealogy researcher can now phone the relatives or post the vaca pix on a social media site — instantly.  And I do.  But, I still like postcards. They last longer than the quick pix of the internet.  Most postcard pictures are better than any I could take. Plus, they are a terrific informational resource for the genealogist.

Although pictures on postcards didn’t come into vogue until after 1900, the idea for a quick, easy way to send notes–Sounds a lot like the idea for email, doesn’t it?–has been around since the 1870s.

To set the stage for the genealogy researcher, here is a picture perfect timeline:

To ascertain dates of a postcard, the genealogy researcher needs to note all of the information on the cover, or front. Then, the family history research can follow or see when and how it changed. Determining when messages could be written on the front – or when they couldn’t – is relatively simple. For those doing ancestry research, the address side may even be more important than the picture.

Here are some additional items on a postcard that can help date it:

Stamps have changed over the years. Many libraries have Scott Standard Postage Stamp Catalogues. It is updated annually and is considered the best source for postage stamp information.

Post offices have come and gone. Knowing when a post office was in existence can help date a postcard. In the earlier days and at smaller post offices mail was hand cancelled. The postmark may also indicate the time of day the postcard was sent.

Most cities began address systems before small towns and rural areas. Rural free delivery (RFD) was created by an act of Congress in 1893 although many rural areas didn’t start using RFD addressing until after 1900. If one area was annexed by another area, the address could have changed. This may be a possible clue for the date of the postcard.

Of course the ancestry researcher may note the styles of clothing and hair.

Many early picture postcards were printed in Germany because they had better printing processes. In 1917, the pictures began to have borders and in 1930 the quality of the cards improved making them look more like linen. Use buildings or landmarks to date a picture. They do change.

When doing the ancestry research, it is a good idea for the genealogy researcher to learn when vacations were taken. Before cars were common place and highways improved, trips were a big deal. It was not unusual for at least part of a family to be visiting relatives for several weeks.

Now you have an idea of how, in addition to a nice remembrance of a special trip or place, postcards are a great information source for the genealogy researcher.

Found any old postcards in the family? Let a professional genealogist from RecordClick help you identify the essentials and find more information for you. When you hire a genealogy researcher from RecordClick, you will travel far and wide into your family history. You’ll have lots of remembrances to bring back home.