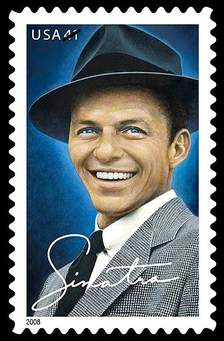 A hundred years ago, Sinatra was born and now he is being remembered with documentaries, shows, reissued books and a new picture book featuring 400 pix. Every genealogist would love a collection of photos like this. Lucky Ol’ Blue Eyes–his genealogy and legacy continue.

Frank Sinatra’s genealogy is well known. His parents were immigrants from Italy. They’d eloped and then married in Jersey City, a far-away place that paved the way for success of the family name.

That name, Sinatra, almost got a genealogy change when son Frank was becoming the famous singer that he was to become. Musician Harry James suggested it be changed to Frank Satin because of that voce, his voice, you know–that unforgettable voice. But his mom, Dolly Sinatra, the local abortionist and bar owner, refused, it is said. She knew the ancestry, the family history, the genealogy. She and Frank knew that Cousin Ray in Boston was a Big Band leader and was doing just fine with his original family name. No one was going to mess with their legacy. Nope.

And now it is 100 years since the birth of Francis Albert Sinatra on Dec. 12, 1915, in Hoboken, New Jersey. If the genealogy researcher really looks, you’ll find that his original birth certificate is said to have had Frank Sinestro written on it. And then in 1945, the more famous Frank Sinatra had the “clerical error” corrected to Francis A. Sinatra.

Ah, genealogy. When people get famous, they want their family tree and lineage just so.

The celebration of whichever version of Frank Sinatra was born a hundred years ago has been a year of remembrances of his life. There has been an HBO show, library collection shows, Grammy museum show, books written and books reissued.

Born a hundred years ago this month, Sinatra lived and played hard and leaves a legacy that is not forgotten. 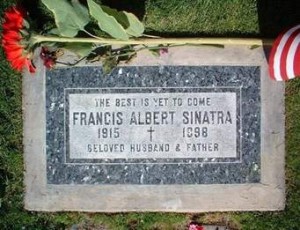 Born a hundred years ago this month, Sinatra lived and played hard and leaves a legacy that is hard to forget.

Now comes a new Sinatra 100 volume, published by Thames and Hudson that includes 400 photographs, some of which are new to the public eye. Lots of people have written bits in it including Tony Bennet, Steve Wynn, Nancy Sinatra and Tina Sinatra.

And what about the genealogy of Frank Sinatra?  Has it continued?  He did have three children with his first wife, Nancy. Most every genealogy researcher knows this.  But dig a little bit more because aren’t your ancestry boots are made for walking?  You can find out who and where his grandchildren are. You might find some interesting lineage answers.

Begin with the picture keeper-protectors who happen to be Frank’s daughter Nancy’s daughters–Amanda Erlinger and her older sister A.J. Lambert. They are active protectors of the family treasures and genealogy. There are assets in those pictures. How lucky! They have thousands of pictures with people who can be identified. Wouldn’t every genealogy researcher die for a collection like this!? Doesn’t every genealogist crave hundreds of pictures with our relatives and friends identified in each one?

That Frank Sinatra was a once in a lifetime man with a unique story. Yes, he was, with his amazing voice and eyes so blue. And each family has a once-in-a lifetime-person with a unique story somewhere in the genealogy. Maybe not so famous or with such a good voice. But legends are what families are made of. Sometimes, those legends sing.

When you hire a genealogist at RecordClick, our professional ancestry researchers will find the unique stories of those people in your family’s tree.