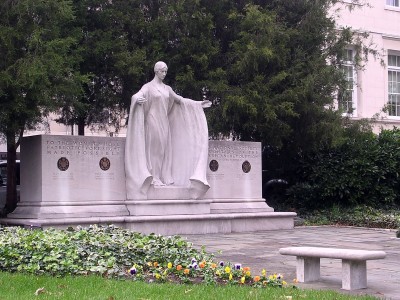 Looking for a vacation destination? Consider surfing the stacks, fishing the folios, boating the Boolean search, or rafting the repository at one of the preeminent genealogy research centers in the United States. You won’t need bug spray, bear repellent, or Dramamine — just a thirst for knowledge and a desire to map your lineage.

In an era of cyber technology, is there really a place for gumshoe genealogists who still believe that shoe leather must be sacrificed to make the greatest finds? It may surprise you to know that Craig Silverstein, Director of Technology at Google.com, was quoted as saying, “My guess is (it will be) about 300 years until computers are as good as, say, your local reference library in search.”

In addition to local reference libraries, there are a handful of premier genealogical research centers in the United States, including the Salt Lake City-based Family History Library; the National Archives and Records Administration in Washington, D.C.; and the DAR Library housed at the National Society Daughters of the American Revolution headquarters at 1776 D Street NW in the Nation’s capital. Considered meccas of research, these centers house collections with varying focal points and beckon visitors to wander their stacks, pore over their microforms, and peruse their manuscripts.

The Daughters of the American Revolution (DAR) is the largest lineage society in America with about 168,000 members. In 1896 the National Society DAR established its library. It took up residence in the auditorium of DAR’s Memorial Continental Hall in 1949. Gen. Edward Pearce Casey, who also designed the interior of the Library of Congress, designed the Hall in the classical revival style of the beaux-arts in 1905.

Starting with just 600 books in 1896, the DAR Library now boasts 180,000 American genealogical and historical manuscripts and publications (including 30,000 family histories/genealogies and personal letters); 300,000 files of genealogical documentation; and 15,000 volumes of unpublished genealogical records (including Bible records and cemetery transcripts).

The DAR Library is not just limited to the American Revolution. Its collections also include a vast coverage of Colonial and 19th Century topics, as well as resource materials supporting women in American history, African-American, American Indian, and Jewish genealogical research. Supplementing the print holdings of the Library is DAR’s Seimes Technology Center, which has 65,000 microforms in its collection, comprising federal census records 1800-1900, Revolutionary War records, and many state records not found in other D.C. research centers.

While open to the public, the DAR Library suggests checking its online calendar for hours of operation. While the Library is free to members, non-members pay a small user fee that goes to maintaining the collections. For those of you who can’t make a pilgrimage to D.C., the Library also has a presence on the Internet through its online catalogue. Its American Genealogical Research, a 175-page guidebook, explains DAR’s reference collections. The guidebook offers tips on making the most of these resources, as well as navigating the Library stacks.

No matter how many libraries or courthouses you visit or cemeteries you wander, sometimes you hit a wall in your research. The Internet provides an extraordinary wealth of genealogical resources, enough so that Kory L. Meyerink, founding director of the Salt Lake Institute of Genealogy and consultant for the PBS series Ancestors, compiled the top 50 genealogy-related websites — the DAR Library is included on the list. While the ease and speed of locating information with a keystroke or two is a siren song to family history sleuths, especially to Generation X, Y, and Z, as well as to Baby Boomers I and II, take heed all you Cyber Gen Genealogists — undocumented material found on the Internet is not always trustworthy. A cyber hit may help you hurdle an obstacle, but don’t let it take the place of solid documentation.

Consider the fact that the best detectives of all time — from Sherlock Holmes to Hercule Poirot to Lieutenant Frank Columbo — didn’t solve mysteries with the aid of the Web. They did it the old fashioned way by visiting the scene. The fact that America’s premier genealogical centers are located in some great vacation destinations is a real incentive for families to plan their next vacation to include a trip to a library. For some, diving head first into stacks of family history may be as exciting as a ride at any major amusement park.

For help with your genealogy research, speak to a professional genealogist today!