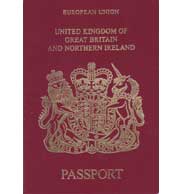 Halt! Who Goes There! We usually hear that phrase in movies, sometimes followed by the showing of travel or identity papers. In this article, Certified Genealogist Joan Shurtliff reveals how passports and emigration records can be great resources in helping you to trace your ancestry. Get ready to start your ancestor search in America’s Mother Country.
(photo credit Nancy Siddons-Daniels)

Halt! Who Goes There!

Who hasn’t heard the phrase while watching an old movie? Not just a movie trivia question, that phrase is one of the United States Armed Forces General Orders for Sentries, and used especially when securing borders. Tracking travelers, however, didn’t start in the U.S.

We are a people on the move; we have been since the dawn of existence. At first, the search was to fill basic needs – food, shelter, protection for our bodies. Then someone decided to see what was over the horizon, just because it was possible. Along the way, settlements and countries evolved. With that came the desire to delineate borders and keep track of who went where. There are The Great Wall of China and Hadrian’s Wall, city walls, and castle moats. England, and later Great Britain, was one of the earliest countries to start tracking travelers.

So who were the travelers? Who determined whom to allow in and whom to keep out? What happened to the records? The paper trail that genealogists love to follow began.

In earlier days, papers called “safe conducts” or passes “beyond the seas” signed by a king or queen helped insure safe passage across borders and into new lands. The documents were usually used by upper class travelers on government or financial business and could be utilized in conjunction with a letter of introduction. The term “passport” evolved and the record keeping began began.

1414 – A reference is made regarding “safe conducts” in government records.
1450 – The Privy Council (a body of advisors to the ruler) Register begins. One of its duties was granting passports.
1641 – The year the earliest surviving passport, signed by King Charles I, was granted.
1772 – The language used to write passports was changed from English and Latin to French.
1794 – Passports were issued by the Secretary of State.
1858 – Passports were restricted to United Kingdom nationals and the language was changed from French to English.
1914 – Passports were printed on paper and contained a picture of the holder. They were now required for overseas travel.
1915 – The first modern United Kingdom passport was issued.

British passports and emigration records can go hand in hand for genealogical researchers tracing ancestry. Keep in mind that the record keeping system evolved; to start with passports were not required. There are estimates that between 1630 and 1700, 380,000 English citizens relocated to the Americas.

Whether you are a professional genealogist or just enjoy family search genealogy, The National Archives (TNA) in the UK is a good place to start to trace your ancestry. TNA has worked with findmypast genealogy website to create indexes of British passport applicants from 1851 to 1903. They can be accessed for a fee through the U.S. website: www.findmypast.com or the UK website: www.findmypast.co.uk. There are no indexes for 1857 or 1863 to 1873. 1858 is missing names beginning with A-G.

Other passport records at The National Archives at Kew include:

More information on the passport resources can be found on the TNA website.

Genealogical research would be easy if all the information was located in one place. But in Great Britain, like the United States, that isn’t necessarily so. The TNA website is helpful in that it has two parts. The first is the TNA. The second area, A2A – Access to Archives, lists the holdings of other repositories throughout the country through the online archives network.

Great Britain is divided into 10 regions with many repositories from the Abbey House Museum to Yorkshire Sculpture Park. For example, I searched for other repositories with passport information and came up with the North Yorkshire County Records Office. Among its holdings is “Specimen seals and signatures in case of authorization for passports 1858.” As in most genealogical research, the more specific the site, the more specific the information.

The TNA website has a list of helpful books for those genealogists searching for passport information. Two of note are: Original Lists of Persons Emigrating to America, 1600-1700 (Chatto and Windus, 1874) by J.C. Hotten. The multi-volume set contains information from TNA registers of licenses to pass beyond the seas. The second volume is Migration Records by Roger Kershaw (TNA books, 2009).

For genealogists tracing ancestry, seeking passport and emigration information in Great Britain can get a bit complicated. TNA and A2A can help direct genealogy researchers to possible research sites. For additional help, RecordClick has experienced genealogy ancestry services and genealogical researchers in Great Britain. RecordClick has access to TNA and can assist with ancestry searches through other repositories of information. Take a look at TNA and A2A.