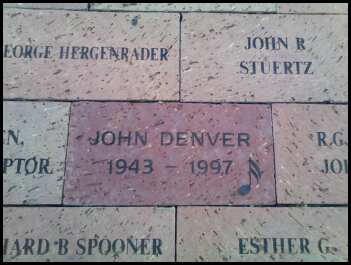 If you are looking for a Rocky Mountain High, you just might find related genealogical research answers in Lincoln, Nebraska. While visiting the American Historical Society of Germans From Russia headquarters and museum in Lincoln, Nebraska, professional and board-credentialed Joan Shurtliff literally stumbled on a brick inscribed with the name “John Denver.” Could it be The John Denver of Take Me Home Country Roads fame? You’re about to find out. [Spoiler Alert!!! It IS one in the same]

A family history researcher always has to be on the lookout because there are interesting facts and items around every corner. And what is found can elicit a Really!? from even the most seasoned genealogical researcher. Even as a veteran genealogist, I  was a bit surprised when I visited the American Historical Society of Germans From Russia (AHSGR) in Lincoln, Nebraska, a couple of months ago. The Society’s headquarters are in a modest building, which is designed to give visitors a feeling of the old country. The adjacent museum covers more than two centuries of history of Germans from Russia through displays that include some out-buildings, including a church, store, and a summer kitchen. 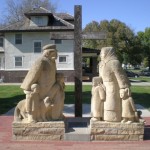 Photo courtesy of the American Historical Society of Germans from Russia; Lincoln, Nebraska

There is a statue in front of the building, but also the ground is paved with bricks bearing the names of families who support the museum. One particular brick that caught my eye was inscribed John Denver.

I have no problem admitting that I was a John Denver fan beginning in my college years. His blond hair, big grin, glasses, and down-home attitude appealed to me. I knew he was of German descent, but I didn’t realize he had Germans from Russia in his heritage. Curiosity got the best of me, and the genealogical researcher took over.

John Denver’s given name was Henry John Deutschendorf Jr. Through the lyrics to his songs, his book titled Take Me Home: An Autobiography, along with the genealogical research his family members have done, the Germans From Russia Museum and Library in Lincoln and online have a fair amount of information on Henry John Deutschendorf’s history and family. The country roads of John Denver’s life don’t lead home to West Virginia, Colorado, or the mountains – rather to a small farming community in west-central Oklahoma called Corn (formerly spelled “Korn”).

There are some dates in his biography that should be remembered: 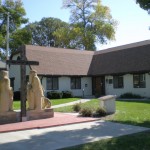 Photo courtesy of the American Historical Society of Germans from Russia

Deutschendorf and the Koops were descendants of a group of German farmers who accepted an invitation from Catherine the Great to settle near the Volga River in Russia in the 1700s. In the mid-1800s the political situation in Russia changed and the cordial relationship with the German settlers began to deteriorate. The Germans from Russia began immigrating to the United States.

Denver’s paternal grandfather, Johann Heinrich Deutschendorf, was born in Russia of German parents in September 1895. According to the 1920 U.S. Census, he immigrated to the United States in 1913 and settled in Washita County, Oklahoma. He owned no land because, by the time he arrived, free or inexpensive land was gone; instead, he rented farmland.

In 1917 he married neighbor Anna Elizabeth Koop. The families were of the Mennonite belief – a conservative religious sect founded in the area of southern Germany/Switzerland in the early 1500s. Notably, Mennonites consider themselves simple, peace-loving people with religious ties to Amish and Hutterites. The three groups believe in adult baptism, and fathers and husbands serve as head of household. While music played a role in religious worship, little singing was done in the home.

Anna Koop’s parents, Henry and Elizabeth Janzen Koop, were Russian immigrants arriving in December 1893. Leaving Germany from the Port of Bremen, they sailed on the ship Stuttgart.

After their arrival, the Koops made their way to Kansas. Between 1895 and 1899, the family relocated to Washita County, Oklahoma. Henry homesteaded 160 acres in Section 25, Township 10 North, Range 16 West proving up in April of 1905. The land was satisfactory and supported the growing family. The good times, however, were not to last – patriarch Henry Koop died in 1913:

The Deutschendorf household was a busy place in 1920. The census was taken in mid-February of that year, and it showed that Elizabeth and her children were part of the household, and John and Anna had a son, Henry John, on April 15.

While many families left Oklahoma during the dry years of the mid-1930s, John Deutschendorf hung in there. The population of Washita County decreased from 29,435 in 1930 to 22,279 in 1940. In the 1940 U.S. Census, John listed his occupation as farmer. Son Henry John at 19 had completed three years of high school and was earning money working as an assistant janitor at the public school. War was looming in Europe at the time, and Henry John made a decision totally out of nature with his religious Mennonite background – he joined the Army.

I can almost imagine some of the conversations in the household before the enlistment; the elder Deutschendorf could not have been pleased. Not only was his son’s decision a major break with the Mennonite tradition, but because Henry John was intelligent, young, and strong, his help on the farm would be missed.  On 30 November 1940, Henry John enlisted as a private in the Army in Oklahoma City. He stated that his civilian occupation was a farmhand, and he was single without dependents. He couldn’t have known what his future held, but the sky was the limit. The military became his life.

Not long after Henry John’s enlistment, he met a Tulsa girl – Erma Louise Swope. The two fell in love, got married, and in 1943 had a son, Henry John Deutschendorf Jr.

While Henry John Sr. was growing up, technology was making huge strides. He must have seen bi-planes as a youngster on the prairie. The two wings became one, and the covering changed from cloth to shiny silver metal. Engines improved and the planes kept getting larger, flying faster and higher. The military provided Deutschendorf – who had to have excellent eyesight, intelligence, outstanding reflexes, and a knowledge of how engines worked – the opportunity to learn to fly the new planes. He became an Air Force pilot in 1947, eventually flying the B-58 Hustler faster than the speed of sound. A highlight of his career came on 12 January 1961 when he and his crew set six world speed records.

There is little the military and the German Mennonites have in common, but one thing is structure. Perhaps the military gave a new routine to the life of Henry John Deutschendorf Sr., replacing that which he left behind on the farm. The Mennonites were more into work and doing what was expected of the individual without complaint, and the discipline required of a military pilot certainly fit the bill. Still, Henry John Deutschendorf Sr. followed his own path that might very well have been considered free-spirited by his Mennonite relatives. Whatever the opinions were, the decision of Henry John Deutschendorf Sr. to break with his Mennonite heritage changed the course of his family.  His son, John Denver, was no less disciplined than his father; however, his path was an artistic one, and certainly considered free-spirited. Where the musical artistry trait came from is a mystery, but it is possible that it came from John’s mother, Erma Swope. Next time I am at the American Historical Society of Germans from Russia, I will definitely take a peek at her side of the family.

For more information on the AHSGR and museum, see Joan’s blog Another Genealogical Gem: Germans From Russia Find a Home in the U.S.

For help with your ancestor search, consider the genealogy research services of RecordClick.