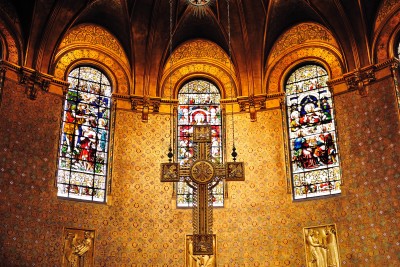 “For where two or three are gathered together in my name, there am I in the midst of them.” – Matthew 18:20.

And gather the settlers did in Nebraska in the mid-19th Century. Missionaries and ministers were not far behind — someone had to minister to the spiritual needs of the new inhabitants. Many denominations were present, but the dominant three were the Methodists, the Catholics, and the Lutherans. Whether you are religious or not, church records may hold a fountain of information about your ancestors.

Even as the explorers were defining the land that was to become Nebraska and the Great Plains, missionaries were setting out to save souls and minister to the needs of the people, including Native Americans, living there. It was not an easy task, but by the 1850s, a number of religious denominations were organizing and building churches. Church records are a good source of information for Nebraska genealogists.

Although almost all religions are present in Nebraska, the most common, during the time the state was being settled, were Methodist, Catholic, Lutheran, Presbyterian, Congregational, Episcopalian, and Baptist. There were many more denominations, but Methodist, Catholic and Lutheran were the dominant three in those early days.

1854 – Nebraska Territory formed.
1854 – The Methodist Episcopal Church officially began serving the needs of the people of Nebraska. In October, a pastor was assigned to Nebraska City.
1856 – The first Catholic Church, St. Mary’s, was dedicated in Omaha.
1856 – Bellevue Presbyterian Church was organized.
1857 – The Vicariate Apostolic of the Nebraska Territory (Catholic) was established.
1858 – The first representative of the Evangelical Lutheran Church to Nebraska was appointed.
1858 – The first Lutheran Church, Emmanuel Evangelical Lutheran Church, was organized in Omaha. It is now known at Kountz Memorial Lutheran Church.
1858 – The Omaha Presbytery was organized.
1867 – Nebraska became a state.
1875 – Synod for Nebraska (Lutheran) was received into the General Synod at the biennial convention.
1885 – The Diocese of Omaha (Catholic), which included Nebraska and Wyoming, was created.
1887 – The Diocese of Omaha was split and reduced to all counties in Nebraska north of the Platte. At that time, the Dioceses of Lincoln and Cheyenne (Wyoming) were created.
1912 – The Diocese of Kearney (Catholic) was created.
1917 – The Diocese of Kearney was transferred to Grand Island.
1939 – The Methodist Episcopal Church; the Methodist Episcopal Church, South; and the Methodist Protestant Church merged to form the Methodist Church.
1945 – The Omaha Diocese became an Archdiocese.
1968 – The United Methodist Church was created when the Methodist Church joined with The Evangelical United Brethren Church.

Before immediately delving into church records, it might be a good idea to learn come history about the particular denomination you are researching. We’ll take a little closer look at the top three.

Through the first half of the 20th Century, many small towns in Nebraska had a Methodist Church. Ministers, then and now, are assigned rather than called. Methodists were not noted for their record keeping, with the quality varying from minister to minister. If the church is still active, that is where records will be found. If a church has closed or if information on a minister is sought, it should be in the archives on the lower level of the Cochrane-Woods Library at Wesleyan University in Lincoln.

In some areas of rural Nebraska, Catholicism is the predominant religion. A small town may have had a Catholic grade school, high school or hospital. Specific areas of Omaha are also predominantly Catholic. When researching Catholics, be aware that members of many congregations were of one nationality. If there were Polish, Czech, Irish, and Germans living in one area, each could have its own church. Priests are assigned to parishes, and records should be in good order. Nebraska genealogy researchers should check with the local Catholic church in regard to records. The Omaha Archdiocese office, might be able to help with older records or information about Omaha area churches.

The Lutheran churches may be among the most complicated to work with. Cities in Nebraska with a population of 7,000 or more may have four or more Lutheran Churches belonging to different synods or governing councils. Many Lutheran Churches are linked to individuals with a Scandinavian or German heritage. In the early days of the state, synods represented included: Nebraska Synod, Danish in America, Danish United Lutheran, German Iowa, Norwegian in America, Augustana, and Wisconsin. Lutherans use the call method for obtaining ministers, and the denomination is noted for keeping good records. The Evangelical Lutheran Church of America (ELCA) regional archives house records relating to synods and congregations, including records from dissolved congregations. The archives of the Nebraska Synod are located at Midland Lutheran University in Fremont, Nebraska. The collection has both Augustana materials and records from the German Nebraska Synod, part of the former United Lutheran Church in American.

For more information contact: office@nebraskasynod.org. Finally, the Nebraska State Historical Society has a number of church records from across the state in their manuscript collection.

Regardless of the denomination, tracking down church records in Nebraska can be challenging. Churches opened, closed, moved, changed their names, consolidated or did any of a number of things including burning, flooding, and blowing away. The knowledgeable Nebraska genealogists at RecordClick can help you sort through your information, provide you with ideas on where to search, or do the search and obtain the information for you. They can also research the churches in an area to help you find the church where your ancestors worshiped.