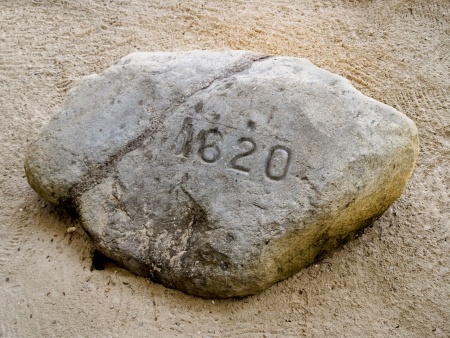 With conquering limbs astride from land to land;

Here at our sea-washed, sunset gates shall stand

A mighty woman with a torch, whose flame

Is the imprisoned lightning, and her name

Pilgrim exiles of 1607, considered religious non-conformists and separatists, served in part as muse to Emma Lazarus’ famous poem The New Colossus, which is inscribed on the Statue of Liberty. Considered fugitives, these Pilgrims faced harassment, heavy fines, and imprisonment, yet the Mayflower Society is one of the most sought after lineage societies for membership. Find out if you are eligible.

The 31 passengers aboard the small Speedwell, intended to be the sister ship of the Mayflower, must have felt panic rising in their throats as the little craft continued to take on water about 350 miles off the coast of Land’s End in Cornwall, England. The Old World probably seemed suddenly not so bad after all, and the New World must have seemed not so attractive to most. But 11 passengers from the Speedwell did join those aboard the Mayflower, while the remaining 20 returned to London, and the Mayflower headed alone across the stormy Atlantic, already several weeks behind schedule, and with the wild weather of autumn facing them instead of gentle summer breezes.

The intrepid ship made the crossing after two months with only two deaths, and safely landed 151 pilgrims and crew at Plymouth Colony in November 1620. William Bradford, leader of the passengers, foresaw potential problems for this small group taking up residence in the New World. Thus was born the Mayflower Compact, signed by 41 of the ship’s passengers (women not being invited to participate) — a remarkable document establishing rules for self-governance in a land so far removed from European civilization. And so began the “Great Migration” from western Europe to the shores of America and the establishment of a new nation.

277 years later, families of 51 of those Mayflower pilgrims formed the General Society of Mayflower Descendants. (Not all passengers survived the harsh first winter.) Today, this lineage society is one of the best-known in the United States, and anyone with direct ancestral links to one of these passengers can apply for membership. The list includes some of the most famous names from our early colonial days:

According to the Mayflower Society website, there are “tens of millions of individuals descended from these brave souls.” The primary goal of the Society is to bring “together people who share this heritage and to carry on the memory of the Pilgrim ancestors.”

If you descend from one of these pilgrims and would like to validate that lineage, your first step is to contact your state society; links can be found on the website. The state historian will provide you with a Preliminary Review Form, which you will fill out beginning with your Mayflower ancestor and working down to yourself. The form is then submitted along with a $20 evaluation fee, and you will receive back your form filled in with the documentation already on file with the Mayflower Society and a report outlining the documentation you will need to submit from the closest proven generation to you. Then you gather as many original source documents as possible: birth, marriage, and death certificates, or suitable substitutes such as baptism records, tombstone photographs, probate records, bible records, church records, town records, and the like. If these types of documents are not available, appropriately documented published genealogical works may be submitted for consideration by the verifying genealogist.

Depending on the date of publication, Mayflower Society may request multiple sources. Both husband and wife at each generation must be fully documented, or statements of attempts to obtain such records that are not held by appropriate repositories (such as county courthouses) must be submitted. All generational links must be clearly proven. It may be necessary to write a clear analysis pulling together a variety of documents and reaching a sound genealogical conclusion.

If one of your ancestors braved the storm-tossed waters of the Atlantic Ocean aboard the Mayflower, establishing that lineage for yourself and your descendants honors those brave souls. The professional genealogical researchers at RecordClick would be happy to help you navigate your personal voyage to membership in this historical lineage society.

Queen Elizabeth I did her best to the reform the church after Henry the VIII split with the Roman Catholic faith in the 1530s. Church of England reformers, known as Puritans, wanted less ritual and more alignment with New Testament principles. A more radical faction of religious nonconformists, the Separatists, evolved and were viewed as a threat to the Church of England and its ruler, King James I. It was these Separatists who left the mother church to form new Protestant denominations, such as Baptists, Presbyterians, Congregationalists, and others. The Pilgrims, so called in the late 18th century by author William Bradford in Of Plymouth Plantation, were the first “little band of believers” who sneaked away from England in 1607.