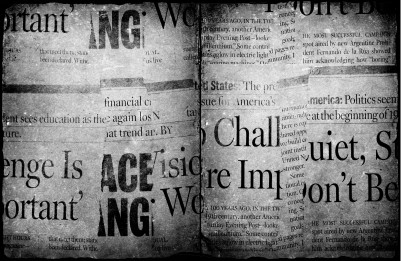 Q: What is black and white and [red] all over?
A: A newspaper (of course) – also known to genealogical researchers as a terrific genealogy research tool.

If you are looking for another great research resource for your New York genealogy – any genealogy research, for that matter – using newspapers in genealogy research is a good idea. In some cases, newspapers can be considered a primary source of information because events and activities were usually reported at the time they happened and therefore included a date. Newspapers carry a wide variety of information; but therein lies the catch. With all that information available, you need to know what to look for and where to look? That’s where I can help you. I’m Joan Shurtliff, a Certified Genealogist, and I have some research tips for you.

It wasn’t until the early 1700s that America’s first continuously published newspaper began. The first New York newspapers were started between 1725 and 1735. Early newspaper production was very labor intensive and expensive because type had to be set by hand. The first news was printed on broadsides – sheets tacked to walls or hung in windows. By 1783, there were 43 newspapers in New York. In the early 1800s, that number increased to more than 300. Until the early 1900s, the number of newspapers printed was constantly on the increase.

Because the printing process initially was very complex, there was little room dedicated to local news in the early days of printing; however, by the mid-1800s, improved typesetting methods and electricity to run the printing presses made the process easier, and more space was available for local news, which drew a larger readership. Publishers and editors saw the advantage to starting papers in smaller towns.

Depending on the location of the newspaper, genealogists may find varying kinds of information. Some Eastern seaboard newspapers may have printed ship arrival and departures; other locations might have listed train arrivals and departures. In addition to newspapers, genealogical researchers also use legals. Even today, every city/county has to have a legal paper to publish meeting minutes, advertisements for bids, etc.

A genealogist can speed up their research time if they know how the newspaper they are reading is laid out. Some papers will have an index on the front page, while others will require getting familiar with the way the news is ordered. A genealogical researcher should take the time at the beginning to read the paper and see the patterns.

Another thing that genealogists should remember when researching newspapers is that the more specific the locale, the more likely that names of local residents can be found. There are a couple of caveats, however. First, people were more likely to make the paper if they were important or were in jail. Second, the longer someone stayed in a community the more likely they were to get involved with town activities and therefore be mentioned in the news. If they were in an area for only a short time, don’t be surprised if they didn’t make the news.

In the 1880s the linotype typesetting machine was patented, and it definitely sped up the printing process. Improved presses made it possible to print more pages, increasing the amount of information that could be included in a newspaper. Local editors took advantage of this. Instead of just stating that a slate of candidates were running for office, the editor may have included biographical material on the candidates. When a couple got married, rather than just their names being listed, a list of attendees and gifts may have also been included.

One more thing for New York genealogists to remember: If you locate a newspaper with a complete run, cherish it. Most newspapers have gaps of some kind. Early on, the focus was on selling the newspaper, not keeping a copy for posterity; for this reason and others, extra papers were thrown away in many cases. These kinds of gaps can wreak havoc with your genealogy research, if no other vital records can be located.

Genealogical researchers will tell you that the largest collection of New York newspapers on microfilm is located at the New York State Library in Albany. The Library has a page dedicated to New York State newspapers on microfilm and in print. As a certified genealogist, one of my favorite websites is compliments of the University of Pennsylvania Library: Historical Newspapers Online. It is updated on a regular basis and includes links to online historical newspapers and historical newspaper projects for every state.

New York does have four Historic Newspaper online sites to aid genealogists in their search:

A somewhat whimsical site with more than 20 million pages is Old Fulton New York Postcards. The site is free, and there is a list of digitized newspapers. I suggest the search engine be used when looking for a specific name.

There are a number of fee-based websites that have access to newspaper archives for genealogists to peruse, including Ancestry.com and GenealogyBank.com. I get frustrated with these genealogical services, however, partly because of the cost, but mostly because of the gaps in the online offerings. At one time Google started a project of digitizing newspapers and putting them online. When it was discovered what a massive project it would be, compounded by copyright issues, the project was halted. Google’s efforts are still online at Google News.

Libraries are a good source for genealogists to view local newspapers on microfilm. The New York Public Library has an extensive holding, as well. Check their website for an online catalog of newspapers.

There are many old New York newspapers available online, allowing genealogists to find multiple years and locales for periodicals. There are just as many – or more – available on microfilm at local libraries or the State Library in Albany. Some may be obtainable through interlibrary loan, but even if you are a seasoned genealogical researcher, you may consider using an experienced RecordClick genealogist to help speed the process.