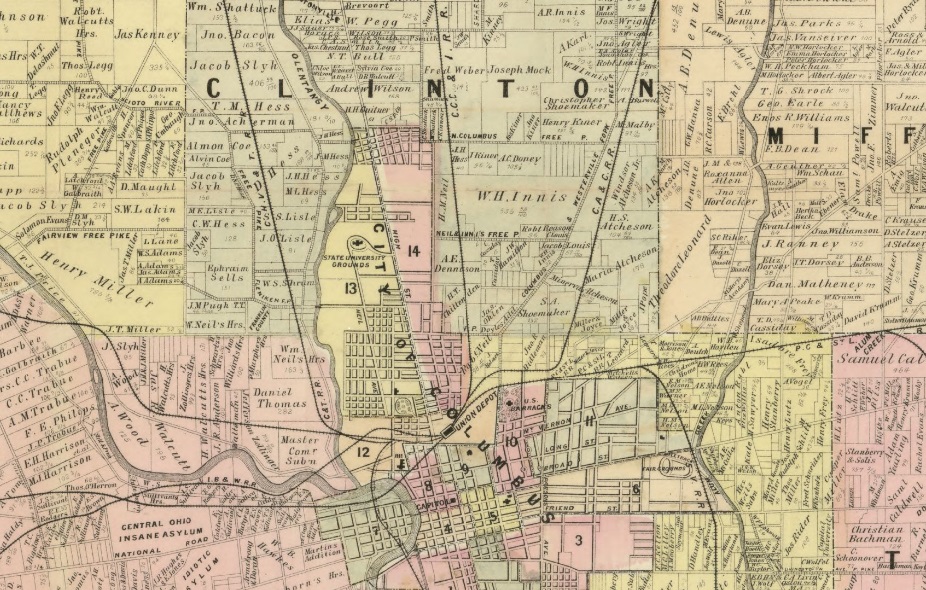 When people settled, they drew boundaries and maps. For the genealogy researcher, getting to know the lay of the land is precisely the way to get a picture of the area’s history. Maps, descriptions, property histories are all terrific tools and resources for the genealogist.

Okay, this RecordClick genealogist thinks about odd things such as…how many families have someone who spent some time in Ohio? How well do those families know the state’s geography and history? What should this mean for the family history researcher?

So, this genealogy researcher is going to discuss some of these things about which I’ve been wondering… To begin with, people were trekking across Ohio long before it became a state in 1805. My ancestors began arriving there just before 1800. The Ohio River was a major route for settlers heading west. George Washington slept in Ohio, possibly.

Ohio has a number of geographical features such as the Great Black Swamp. I had never heard of it until a cousin pointed it out to me. It was a swamp that encompassed land from just south of Toledo to northwest of Fort Wayne, Indiana. This Swamp happens to be where some of my ancestors thought it would be a good place to settle. The challenge was: How does one drain a swamp? For the genealogy researcher, what does this suggest?

A genealogy researcher needs to learn about the land where ancestors lived and the history of that area and property.

In 1787, the Northwest Ordinance was passed and the process of organizing began for what was to become Ohio, Indiana, Illinois, Michigan, Wisconsin and part of Minnesota. People were eager settle new areas and to take on those challenges. Surveys and land descriptions were needed and Ohio became the place where metes and bounds gave way to the rectangular system of land description.

At the beginning, Ohio didn’t have a capital. It was decided that the seat of the state government should be in the center of the state. Proposals were solicited. One notable offer was made to the legislature in about 1812 by Alexander McLaughlin, John Kerr, Lyne Starling and James Johnston to, according to the “Centennial History of Columbus and Franklin County, Ohio”

“…lay out a town on their lands, situate on the east bank of the Scioto river, opposite Franklinton, in the county of Franklin, on parts of half sections numbers, nine, ten, eleven, twenty-five and twenty-six, for the purpose of having the permanent seat of government thereon established…”

The author of the 1909 volume, William Alexander Taylor, goes into detail on the legal process of acquiring the land and the platting of Columbus. Notable is the fact the town was “laid out with streets crossing at right angles.”

For the genealogy researcher and anyone going back in time to their ancestors’ whereabouts, maps are a good tool for learning about the land. The earliest map makers were most concerned with mountains, rivers and coastline, each of which was a barrier to routes for travel. The genealogy researcher will find that Plat maps show property layout and often include the names of property owners. Panoramic maps serve a pre-camera view for the genealogist detailing what a town or city looked like. By using a variety of maps, the industrious genealogy researcher may see many a town begin, grow or remain stable—or even fade back into the land.

After a modest beginning, Columbus, Ohio thrived. Any genealogist may find that recent census records show it has a population of over 800,000 people and an outlook far grander than the founding proprietors McLaughlin, Kerr, Starling and Johnston could ever have imagined. 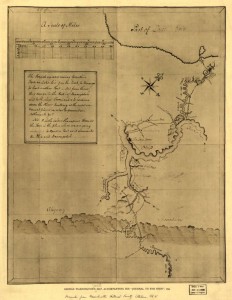 The land map of Ohio made by George Washington.

One of the favorite things about genealogy for this genealogy researcher is that every now and again, something extra special is located. Remember George Washington? How do I know he spent some time in Ohio – other than what a book says?

He left a map.

In the 1750s, Washington was sent to Ohio Country by the Ohio Company to survey some of the land. One of his maps is online at the Library of Congress web site. For this genealogy researcher, this is a wonderful find.

Working with land records may be difficult for the family history researcher. Yet, the rewards are great. Even if your ancestor did not own land, just knowing about the land is helpful in understanding the ancestry story. If you get lost in the land records, an experienced genealogy researcher at RecordClick will help. From metes and bounds to the rectangular survey, RecordClick’s genealogists know where to look for deeds and how to interpret them to help you locate your ancestors.