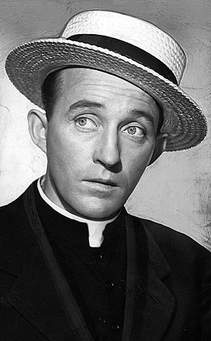 ‘Tis that time of the year again when just about everyone wants to do some professional genealogy research to find a bit of the green to claim as part of their heritage. This RecordClick genealogist has less than a pinch in my ancestry, so I’ve decided to go looking for someone with more. Who better than Father O’Malley of Going My Way fame – Bing Crosby?

Bing Crosby’s Irish family – on his mother’s side – is a good example of not fitting a regular path of Irish immigrants. They didn’t leave Ireland because of the potato famine. Nor were they part of the teaming masses of Irish immigrants who entered the United States through Castle Garden and settled in New York City. When doing professional genealogy research, we genealogists know that every family’s story is different.

Bing Crosby’s search, however, begins in the usual fashion with the 1920 U.S. Census. Just a reminder: when using the census, a genealogy researcher needs to look at more than one or two people and check more than one page. Bing (given name Harry L.) was born in May 1903 in the state of Washington. The 1920 U.S. Census was enumerated in January in Spokane.

The Crosby family is found on two pages:

At the bottom of the first page

are parents Harry L., age 49, and Catharine, age 46, and the two oldest children Laurence and Everett. At the top of the next page are the remaining five children, Edward, Harry (Bing), Catharine, Mary Rose and Robert.

Mother Catharine was born in Minnesota and her parents were born in Canada English. The children were all born in Washington. The oldest two children were born before 1900, so the family should be in that census.

The Crosbys were living in Tacoma. Harry and Katherine are listed as being married six years with Katherine being born in February 1873. Note: This professional genealogist is using the spelling of the name Catherine/Katherine as it appears in the various documents.

Now, when doing professional genealogy research, one needs to look for information in places other than the census. According to Washington marriage records, Harry Crosby and Catie H. Harrigan were married by a Catholic clergyman on January 4, 1894. A check of the Tacoma Daily News finds two items about the Crosby-Harrigan nuptials. The first, on January 4, announces that “Miss Kate Harrigan and Mr. Harry L. Crosby will be married… at St. Leo’s church.” The second, on January 6, informs the public that the two were married at the German Catholic church with Anna Harrigan, sister of the bride, as the bridesmaid.

In the 1880 Census, Kate and Anne are part of the Dennis, age 50 and a carpenter, and Kate, age 43, Harrigan household in Stillwater, Washington County, MN. The family owns a boarding house and all the children from William, age 13, down to George, age 1 ½, are listed as being born in Minnesota. Both Dennis and Kate were born in New Brunswick, Canada of Irish parents. These are the mother and maternal grandparents of Bing Crosby.

The 1900 U.S. Census is a good resource for professional genealogy research because of all the information, including immigration, which it contains. It seems that between 1880 and 1890, the Harrigans moved from Minnesota to Snohomish County, Washington. Dennis and Catharine Harrigan were married in about 1867. Dennis, born in October 1830, immigrated to the U.S. in 1859. Catharine is listed as coming here in 1867 about the same time as their oldest child was born in Minnesota. According to Minnesota marriage records, Dennis Harrigan married Catharine A. Haren on October 28, 1866 in Ramsey County (St. Paul), Minnesota.

So how did young Kate Harrigan, Bing Crosby’s mother, wind up in Washington?

How and why did Dennis Harrigan move to Minnesota?

The pieces to the story are available. From this professional genealogy researcher’s viewpoint, here’s what happened:

In the early 1800s, religion started becoming an issue in Ireland. The Church of Ireland (Protestant) was in need of financing and, in the early 1830s, a tithe was placed on citizens (including Catholics) for its support. This coupled with other issues, may have provided the incentive for the Harrigans to relocate to New Brunswick, Canada where Dennis, and possibly other siblings, was born. Catherine’s parents also relocated to New Brunswick where she was born. Being a rural, maritime area the timber industry was a major source of employment. Dennis became a carpenter. About 1860, he immigrated to the United States. The St. Lawrence River and the Great Lakes provided the easiest route inland, no documentation needed.

Minnesota became a state in 1858. The St. Croix River starts about 20 miles south of Lake Superior and, beginning in Pine County, forms the border between Minnesota and Wisconsin. With settlers coming into the area, there was a need for lumber and trees were readily available. Dennis could have known Catherine from New Brunswick and sent for her. St. Paul is less than twenty miles from Stillwater, Washington County, MN. Priests were in short supply, so a Catholic wedding there is within the realm of possibility.

After starting their family, the Harrigans moved to Tacoma, Washington between 1880 and 1890. There timber was plentiful, the population was increasing and the climate more temperate than Minnesota. Dennis gained knowledge and skills enough to become a contractor. Young Catherine Harrigan met Harry L. Crosby and the rest is genealogical history.

When you hire a genealogist for professional genealogy research from RecordClick, we find the special information in your family history.