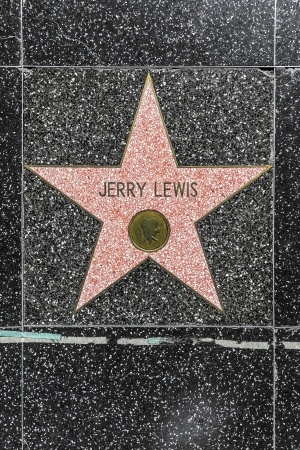 Jerry Lewis changed his name when he was very young. He wasn’t the first one in his family to have a stage name.
In honor of his 90th birthday, our ancestry researcher finds lots of names in his family. It just takes a little digging and wow!

It is the 90th birthday of comedian Jerry Lewis. Yes, March 16, 1926, he was born in Newark, New Jersey. The world famous comedian, director, fundraiser, star is known through the world as Jerry Lewis. As in the case of many stage names, it is somewhat related to his birth name. How? The initials are the same.

Stage names run in his family. His father, also, had a stage name: Danny Lewis. And his was also nominally related to his birth name, too–by the initials.

So begins the story of these two men and their real names. Daniel Levitch, the father and Jerome/Joseph Levitch, the son.

Both were performers. The mother, Rae/Rachel Brodsky Lewis, was also a performer. She played the piano for the radio and was her husband’s musical director. The family spent time performing in the Catskills.

Let’s look at Jerry Lewis’s father. According to the 1915 U.S. Census, Daniel Levitch was born in New York. His Social Security Death Index card lists him by his stage name, Danny Lewis, and has his birthday as April 11, 1907 and his date of death as November 1980. His last residence is listed as Las Vegas, Nevada.

The 1915 U.S. Census gives the professional ancestry researcher some details including that Jerry Lewis’s paternal grandfather, Danny Lewis’s father– Morris Levitch, is listed as age 42 and a peddler. The wife of Morris is listed as Hannah, age 38. Jerry’s father Daniel was just age 13 and had a sister Gertrude, age 9.

They lived at 37 Grafton Street, Kings County (Brooklyn), New York City. When doing professional ancestry research, it is good to go back as far as you can. Here, going back five years, in the 1910 census, Morris is listed as a retail merchant—food. They were living on Grafton Street then, too. They had been in the U.S. nine years meaning they came to this country in around 1901.

For someone doing professional ancestry research, the census can give more names than expected. Here in the 1910 census, the very exciting piece of information comes on the Levitch family’s last line. It notes that an Isaac Werstein is living with the family. Though the cover sheet says Merstein, close examination of the actual handwritten script indicates that it is a W not an M. Isaac Werstein is listed as age 76.

He is a retail merchant—food, just as Morris Levitch is. Perhaps they were in business together. The really great piece of genealogical information is that he is listed as the father-in-law. So this is Hannah Levitch’s father. And now we have her maiden name: Werstein. We also have Jerry Lewis’s paternal great grandfather’s name.

Fast forward and you’ll see in the 1940 census, Morris and Hannah are still alive and living at 124 Herzel Street, Kings County (Brooklyn).  The census says both are age 65. That doesn’t look accurate when compared to the earlier census. All of the census listings say Morris and Hannah Levitch were each born in Russia. He was educated through fifth grade. She went through seventh grade.

When we look more for Jerry Lewis’s father, we can find his grave in Nevada. On the Find-a-Grave listing, Jerry Lewis’s mother/Danny Lewis’s spouse is listed as Rachel. When we go to her grave, we get a bit more information on Jerry Lewis’s mother. She was born in Poland on Dec 26, 1903 and she died in Las Vegas on Feb 18, 1983.

Her place of birth is listed as Warsaw, Mazowieckie, Poland. We also get Rae/Rachel’s parents’ names: Joseph Brodsky (whose Hebrew name was Baruch Tzvi) who was born in about 1858 in Russia and died in the Bronx, New York, on December 7, 1922. We also learn that his wife, Sasha Brodsky died on May 16, 1941. Both of Jerry Lewis’s maternal grandparents are listed as buried in Newark, New Jersey in the Grove Street Cemetery.

Digging a little bit further, we see that Sasha Brodsky died many years after Joseph. Notes by a relative on the Find A Grave entry give us some more information about her. When doing professional ancestry research, one must always pays attention to relatives’ recollections. They do provide lots of material that fills in the blanks.

First, we find that her name was likely Sarah, her maiden name Kaufman and her father’s name Abraham or possibly Avram. She had a second husband, Sam Rothman. She had four daughters in total—Rose, Jean, Rachel/Rae, and Elizabeth.

Relatives’ notes say that her first husband Joseph was a tailor who came to the U.S. first and then sent for Sasha/Sarah and their three daughters. Notes also say that she worked as a tailor in the U.S. and died during an operation on an ulcerated leg.

According to the relative’s notes, Jerry Lewis’s grandmother Sasha/Sarah called Jerry Lewis “Joseph” after her first husband, his grandfather, who had passed away four years before Jerry was born. This is likely his Hebrew name with his legal name being Jerome.

So, this genealogist will say Happy Birthday to Jerry Lewis, Jerome Levtich, Yosef Levitch. Whatever his name is in the universe, we are glad he is still with us and wish him health to 120 years.

When you hire a genealogist at RecordClick, you get professional ancestry research that will uncover the names, the places, and the people in your family tree.