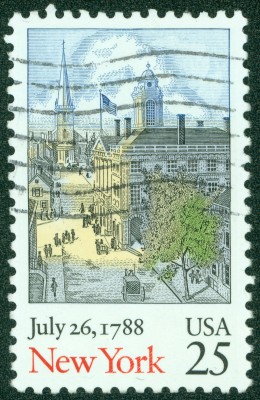 “I Heard the Bells on Christmas Day / Their old, familiar carols play, / And wild and sweet / The words repeat / Of peace on earth, good will to men.” ~Henry Wadsworth Longfellow

Most of the year, it is easy to separate church and religion from the routine comings and goings of our lives. And then comes Christmas. If we can get past the commercialism, for a while anyway, religion becomes part of our daily lives. What New York genealogists never forget is that for many of the early settlers in what is now the United States, religion was a major aspect of who they were. The good news for researchers seeking New York genealogy, a church or temple is a great resource for information. For New York genealogists researching family history in that state, religion can take an interesting twist, however. What it is now, wasn’t always so. Certified genealogist Joan Shurtliff continues her in-depth series on New York genealogy resources.

Of the vast majority of New Yorkers who practiced a faith in 2000, 7.5 million were Catholics. They are followed by 1.6 million Jews, almost a half-million Methodists, a quarter-million Episcopalians, and less than a quarter-million Presbyterians and Evangelical Lutherans. This is far different from the 1600s when there were only 300 or so parishioners for the Dutch Reformed Church and the Church of England. That’s because the Dutch and English were challenging each other for control of New Amsterdam, now known as New York.

One thing the Dutch and English did have in common was a distaste for the Catholics. The Dutch were involved with the Protestant Reformation, and the English, compliments of Henry VIII, also had a number of issues with the hierarchy of the Catholic Church. So the first two prominent religions in New York/New Amsterdam were the Dutch Reformed and the Church of England/Anglican/Episcopalian. Jews also had a presence in New York in the mid-1600s, but their numbers were small, and the Dutch liked them about as much as they liked the Catholics. The Dutch controlled the area on and off from the early- to mid-1600s. New Amsterdam was ceded to the English in the 1670s.

Until the mid-1700s, the two major religions in New York were the Dutch Reformed and Anglican. Please note that religions, like almost everything else in the world, have ebbs and flows and continually evolve. Presbyterians and Methodists can trace their roots back to the Church of England, and Evangelical Lutherans back to the Dutch. John Knox, founder of Presbyterianism, was a Scotsman who wound up having problems with both the Catholics and the Church of England. Knox lived in the 1600s. Presbyterians found their way to New York by the mid-1700s. John Wesley was an Anglican cleric who started the Methodist movement in a fashion similar to some of the evangelicals today. Wesley was born to a large family in the early 1700s. The Methodist movement began to take hold in England in the 1830s and began to have a presence in New York in the mid-1700s.

As other nationalities began to settle in New York, other religions – notably the Catholics and Jews – began to take hold. Catholic numbers began to grow in the late 1700s, and the Diocese of New York was created in 1808. By 1822, there were two Catholic churches in New York City with other churches in Albany, Utica, Auburn, and Carthage on the Black River. The number of Jews increased to more than 10,000 by the mid-1800s, and after 1900, with the deluge of immigrants from eastern Europe, the number went up to more than one million.

For New York genealogical researchers, there are a number of websites that may be of help with information about the different religions and current congregations in New York.

Donna Speer Ristenbatt has a website, On the Trail of Our Ancestors, with a page explaining various aspects of the Dutch Reformed Church, dates for churches in New York and New Jersey, lists of available records, and where they may be found.

Christening, confirmation, marriage, and burial records should be found at the local church. When looking for a specific church, keep in mind the address and nationality of the ancestor being researched. They would have most likely gone to a church near where they lived and with other parishioners of the same nationality.

The Archdiocese of New York will assist in locating churches in a given area.

Records should be at the local parish.

Colonial Records: Churches that existed in the colonies prior to the establishment of the Protestant Episcopal Church in 1789 should be contacted directly for more information on parish registers and membership. Additional information on colonial churches is available from Lambeth Palace Library (Canterbury), which houses the records created while the colonies were still under the ecclesiastical aegis of the Church of England. Also visit the Episcopal Diocese of New York.

Records should be at the local church. The Presbyterian Church of America Historical Center is located in St. Louis, Missouri, and most of its information relates to church history, ministers, and missionaries.

At RecordClick, expert genealogists can offer advice with your New York genealogy challenges. If you need to locate a church or find the history of a church that no longer exists, we can check our resources. Consider tracing ancestry as a gift, not only for the holiday season, but for special events all year long. It’s Up to You – New York New York. . .genealogists.