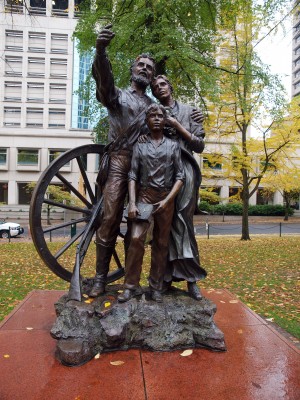 Anyone who has studied American history knows about the Oregon Trail, but did you know that before the pioneers came to Oregon via the Oregon Trail, there was already a settlement in the Willamette Valley known as the French Prairie? Don’t look to the Oregon History website for information — they all but omit this important part of history. If you want to know the history, you’re going to have to dig a little deeper.

I was working on a family tree with roots in Oregon last month, and I came across a Malo family while searching through the 1895 Oregon census. I was a bit surprised because the various Malo branches that left Quebec generally immigrated to New England. Being a Malo family researcher, I just had to find out how Eugene Malo wound up in Gervais, Oregon, living on the French Prairie. I wondered who his parents were and if I could create a genealogy for him.

Anyone who has studied American history knows about the Oregon Trail. Did you know that before the pioneers came to Oregon via the Oregon Trail, there was already a settlement in the Willamette Valley known as the French Prairie? Even the State of Oregon on their Oregon History website that begins with prehistory of Oregon, had failed to mention this community except as two small blurbs. No mention of the people of the French Prairie, who they were, or the role they played in Oregon history. I just had to find out!

The original European settlement on the French Prairie was populated by French Canadians, Acadians, and Metis people from Quebec and the Red River Valley. While the Americans were busy with the War of 1812, the North West Company brought them there in 1813 as fur trappers under the auspices of the Willamette Trading Post. By 1821 the Hudson Bay Company (HBC) absorbed the North West Company and took over the Willamette Trading Post. If you had ancestors that lived in the French Prairie community, you may find records about them in the Manitoba archives as the HBC donated their records to the province of Manitoba.

I can’t help wonder why this important part of history — the original French Prairie settlement — is all but omitted from the Oregon History website. As a descendant of the Red River Valley community, Acadians and Amerindians, I feel compelled to advocate for my ancestors buried there on the French Prairie, so far away from home and loved ones. The critical role they played in the history of Oregon should not be swept away for the more quixotic notion of pioneers and wagon trains. These pioneers were amazing and courageous, but none more so than the settlers in the French Prairie community. These French Canadian and Metis settlers paved the way for the pioneers. To know more about the French Prairie visit the website of the St. Paul Mission Historical Society.

Why Eugene Malo came to Oregon is still a mystery to me. Maybe if I dig a bit deeper I will find out. What I do know is that he is my 5th cousin. Genealogical records indicate that he first arrived in Oregon at the age of 17 in 1876, he is back with his family in Quebec in 1881, he arrived in Oregon again in 1882 at the age of 22 and also in 1888 at the age of 29. He married Eulalie Foisy, who was born on the French Prairie, daughter of Medard Godard Foisy b. 1816 in Quebec d. 1880 on the French Prairie, and Marie Anne Delard 1833 – 1908, born and died on the French Prairie. Eugene and Eulalie had nine children. I found his obituary and a photo of his headstone on the Find-A-Grave website. I posted his genealogy below.

Line of descendancy from Gilles Hayet b. and d. in France, perhaps in the area of St Malo, to Eugene Malo

For expert help with your Oregon genealogy, talk to one of our genealogists today.