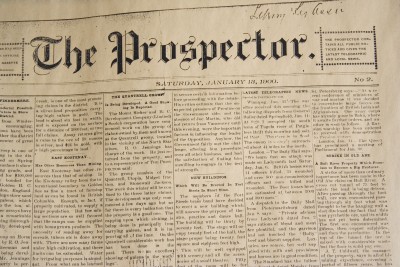 Some of us have those kinds of families that may be described as “boring.” They weren’t famous; they weren’t fabulously rich; they didn’t run for political office; and they didn’t rob any banks. Nothing wrong with that, except it may make them more difficult to research via traditional methods. In these cases, I have a suggestion: Look for the Money!

In my ancestry research, I have one of those families. Almost everybody has one. It’s the family that just gets along. No politicians or preachers that were mentioned in the newspapers. No scoundrels or scalawags with periodic court appearances or prison records. They didn’t climb any mountains or sail the seas (not that I know of). Families of fame or infamy are usually easier to research; however, what the Teachman family lacks in notoriety, it makes up for in something else – longevity.

It’s amazing what you discover when you start digging into your ancestors’ lives. Early in my computer-generated genealogy research of my maternal ancestry, I stuck the last name “Teachman” in almost every search engine I could find. One of the most interesting hits was a newspaper clipping from the New York Columbian, 11 December 1820, reporting a death:

“At Long Pond, New Jersey, Nicholas Teachman, aged 106 years and 5 months; one of the first settlers of the state, leaving numerous descendants of the fourth generation.”

I have since found other notices from newspapers listing Teachman’s age at 100 years. Give or take six years, living that long was a rarity in 1820. Besides the interesting fact that Nicholas Teachman managed to hit the century mark, the notice gave rise to a number of questions to which I wanted to know the answer. Where was Long Pond? Did the Teachman family own property. Is there anything else I can find out from a paper trail?

Applying a little cyber elbow grease, I found that Long Pond, now known as Greenwood Lake, is located about 40 miles northwest of New York City in Warwick Town of Orange County; the lake extends into New Jersey. According to the Warwick Chamber of Commerce, it’s a great place to live if peace and quiet are the goal. New York artists have even painted it.

Through further research, I discovered that the Teachmans are mentioned in a book about the area: The Warwick Woodlands; or, Things as they were there twenty years ago, an early travel book published in 1850 and written by Frank Forester. Roads to the area were less than ideal then, and even now, not direct, but that doesn’t keep Long Pond from being a great weekend getaway spot for city dwellers.

Digging deeper into the Teachmans’ lives, I discovered the fact that the family wasn’t into wills. Unfortunately, I didn’t find much information in the census because the early U.S. censuses for New Jersey are gone. Because the family seemed to be rather non-committal when it came to religion, I couldn’t refer to a family Bible. The other research choice I had was to follow the money. In a day when the banking industry was in its infancy, property often became a family’s wealth.

What I discovered is that Nicholas Teachman owned property on the east side of Long Pond. The search for land records took me to Bergen County, New Jersey. On 1 September 1803, Lemuel Cobb conveyed to Nicholas Teachman a tract of land situated on the east side of Long Pond in the Township of Pompton, County of Bergen and East Division of the State of New Jersey, containing 10 acres. Lemuel Cobb was a surveyor and, as such, was able to convey the property. This was early in the settlement of the area. Richard W. Hull wrote about it in his book, People of the Valleys – A History of the Valleys of the Town of Warwick, New York, 1700-1970: “And as late as 1803 Indians would occasionally appear on the east shore of Greenwood Lake to barter hides for food”.

New York – New Jersey, it’s a bit confusing. Further research cleared the matter up. There was a border dispute between New York and New Jersey. Part of the area in question was on the east side of Long Pond where the Teachmans lived. The New York – New Jersey border has been surveyed several times, once in 1774, with another survey authorized in 1872. It was discovered that the border surveyed in 1774 was not straight, but “bowed considerably south into New Jersey.” (“The New York – New Jersey Boundary Line: While New Jersey Dozed, New York Was Wide Awake”, a paper written in 1997 by Peter Osborne of the Minisink Valley Historical Society.) The reason for the problems with the surveys was a deposit of magnetite in the area that affected the survey instruments. That information has cleared up the confusion about the changing New York-New Jersey border confusion.

I have not yet answered all of my questions, but I have found out some very interesting facts. By finding out about where the family lived, I know that the land was important in their livelihood, and they seemed to be self-sufficient. By the 1800 U.S. census, the “Nicholas” mentioned in the death notice was likely living with a son. Nicholas is a common name in the family. My great great grandfather Luke Nicholas Teachman, born in 1818 in Orange County, New York, was probably “one of the numerous descendants of the fourth generation.”

So, for those of you who have had similar research problems as I, take note that if you are accessing land records, especially early deeds, county and state boundaries may have changed over time. Keep an open mind and an open Atlas. Take note of adjacent townships or counties, even state lines, and check for records pertaining to your family’s land holdings over a broader region. Our families may have stayed in one place, but the boundaries around them may have moved. If you hit a wall, cast your net a little farther. . .you’re bound to catch a great piece of information about your family history.