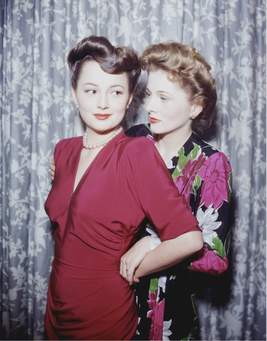 Moving pictures are quite the industry in America. For the industrious genealogy researcher, familyrelocations often present a more challenging research picture. When the genealogist combines relocations with the film industry, we notice that two winning actresses–Joan Fontaine and Olivia de Haviland–fit the genealogical moving picture.

So, when it comes to moving around, this genealogist is going to borrow one of the old Hollywood celebrity families. This week, your avid genealogy researcher will look at the family of the film industry award-winning sisters Olivia de Havilland and Joan Fontaine.

Olivia de Havilland, now 99, lives in France. Joan Fontaine passed away at the age of 96 in California. But, in their long lives, these locations are not the only places they have been.

The heritage of Olivia and Joan is English, by way of Japan. The information derived from various documents is interesting and revealing. As many a genealogy researcher will find, there are far more questions and many more stories to be told once one begins this focused work.

Each sister was a talented, multi-award-winning actress on her own. Their film careers began in the 1930s. By the next decade, both had gleaned Academy Awards. Olivia de Havilland was awarded with two Oscars. The first was in 1946 for To Each His Own and the second one came in 1949 for The Heiress.  Her film legacy, as a genealogy researcher may know instantly, is highlighted by her role as Melanie Wilkes in Gone with the Wind. 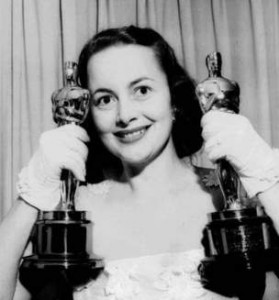 Joan Fontaine made a name for herself in Rebecca, in 1940, and by the next year, she had been awarded her Oscar at the 1941 Academy Awards for Suspicion.

These talented sisters were born in Japan to patent attorney Walter Augustus de Havilland and Lilian Augusta Ruse. Olivia was born in July 1916. Joan followed in October 1917. Health issues with the girls caused the parents to start back to England. They got as far as San Francisco, in February 1919, according to the passenger list for the ship “Siberia Maru”. As the genealogy researcher will see, at that time, Walter was 47 and Lilian was 32.

A combination of ship’s passenger lists, U.S. Census records and the ability of the genealogy researcher to find more salient details all add to this genealogy story. Walter, it seems, may have had a wondering eye. He did not stay with the family and returned to Japan.

The 1920 U.S. Census lists Lilian, Olivia and Joan as living on Sutter Street in San Francisco. Lilian states her occupation is actress. After the couple divorced, Walter married a woman, named Yoki, in Japan and Lilian married George M. Fontaine in California.

The natural next step for the genealogy researcher to take in this moving story is to find out more about Walter and Lilian.

Olivia and Joan’s father, Walter, entered the U.S. through Ellis Island on March 7, 1908. He was 35 years old. No record has been found of when Lilian arrived. The parental couple, Walter and Lillian, was married in Manhattan on November 30, 1914. Soon after, the couple relocated to Japan. The marriage record lists Walter’s parents as Charles and Margaret L. Molesworth and Lilian’s parents as Alfred and Mary Flocking. The more this genealogy researcher learns about Walter, the more interesting he becomes.  So many questions come to the genealogist including:

And, a very important one:

Newspapers may provide valuable clues for genealogy researcher. The actresses’ mother, Lilian, died in February 1975. An obituary in the San Diego Union on February 22, 1975, says she had moved back to New York and had taught theater in Saratoga, New York. Lillian, it was reported, returned to California in 1971 and that is where she died at the age of 88.

The sisters’ father, Walter, made a number of trips from Japan to San Francisco in the 1920s and early 1930s. On occasion, he was accompanied by his second wife, Yoki. In May 1941, Walter and Yoki came to the United States, again, leaving Japan just as the activities leading up to World War II were getting serious. A news item in the San Diego Union reports that they intended to reside in Mexico.

Walter died in British Columbia in May 1968 at age 95. His death registration lists his trade as a lawyer and the genealogy researcher will see that it notes that he last worked in 1940. His parents are Charles Richard De Havilland and Margaret Letitia Molesworth. He was born in Lewisham, Kent, England.

Every family has happenings that family members think could win Academy Awards for best story. The experienced genealogists at RecordClick will use online resources and find solid documentation of your family’s dramas, moves and fascinating details.