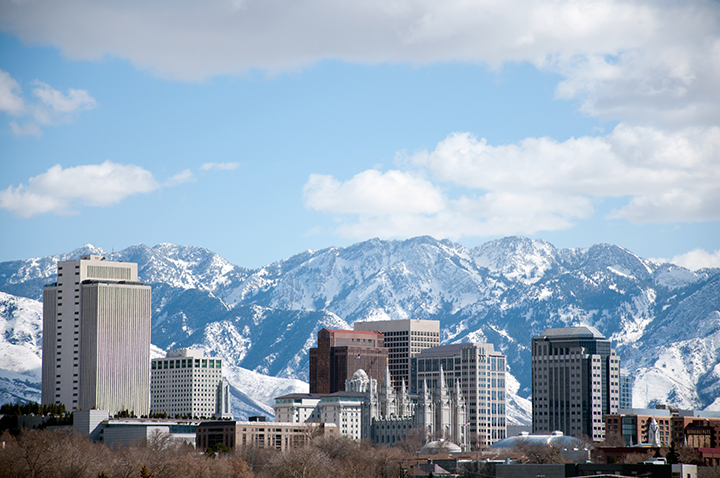 When doing genealogy, the family history researcher will always come across records from
the Salt Lake City-based church of the Latter Day Saints (LDS). Our RecordClick genealogist
has noticed changes in the place and ways over the years.

Salt Lake City – the Mecca of genealogy. Home of the Church of Jesus Christ of Latter Day Saints (LDS) and the Family History Library, owned by the church that is the center of the Mormon faith. I have been making an almost annual trip to Salt Lake City for a fair number of years. While doing my research on these trips, I have also been noting changes in both the city and the library. From my corner of the genealogy world, I have some observations.

As readers may have surmised by now, this RecordClick genealogy researcher loves genealogy and also has a love of history. But let me backtrack just a bit–something a good genealogy researcher needs to do every now and again. A few years ago, my husband and I were on holiday in Paris, France. We both find beauty in maps, including the panoramic maps so popular in the 1800s. My husband likes to check out the old print shops.  In one shop, among its treasures, was a panoramic map entitled:

On this beautiful print, which we ascertained was from the 1860s, there is a rendering of the Village that contains about seven streets leading the eyes of this genealogist and my husband from the basin toward the mountains. There is no image of any temple.

Included with the print was a page out of something that might be called a travelogue.  At the time we found this map in Paris, we weren’t sure what it was because it wasn’t identified and it was in French.  As a good genealogy researcher does, I asked for help. A friend, who had taught French, translated for us some of the comments:

“The fields are vast and numerous, but the Saints (the holies) are too busy to maintain them properly; the weeds swarm (pullulate) there; we see much – often more than corn. This year a late and very exceptional frost took place in the month of May, has created a lack of fruit, the peaches and the vines will not produce anything, there are beautiful apples in the orchard of the pontiff (bishop)…”

“Two things surprise me; the English features which dominate although modified and the prodigious number of children (!) We disembark on the main path, at the population and business center where live the notable Mormons, where the Gentiles have their stores, a unique place of the town which was a single street in every sense of the word… Almost across from the post office on the corner situated above is a hotel for travelers, a two story building covered with a lean-to-roof, decorated with a long veranda supported by painted wooden pillars, as a sign, flying a flag at the end of a mast, indicated the Salt Lake House. It is the main, if not the only, establishment of this type that New Zion contains. I have seen nothing so magnificent for a long time in the Far West where we learned to demand little of the hotels…”

“As for the service, it leaves much to be desired, the blacks from taken flight and it is necessary to wait for the arrival of the hand carts to get some new helpers. But our host, Mr. Townsend, a Mormon from Maine… is the most polite and obliging man in the world…”

Salt Lake City and the LDS have come a long way since that French visitor arrived. The city was founded in 1847, with construction of the LDS temple beginning in 1853. It was completed almost 40 years later. The roots of the Family History Library date to 1894. The current library building was completed in 1985.

The original (and still main) purpose for the LDS interest in genealogy has been for proxy baptism into the Mormon faith. This interest, however, has been expanding to include information on who the ancestors were and what their lives were like. Word in the ‘industry’ of the genealogy researcher has it that the Church Fathers are trying to figure out ways for the Church’s researchers to obtain information not currently available at the Family History Library.

It now seems that those who are in the executive branches of the LDS–perhaps the bishops and elders—have come to revel in numbers and marketing. When a genealogy researcher is in the LDS library, one may see that, on a regular schedule, there is an individual who walks up and down the aisles with a counter clicking a tally of the number of patrons at that moment. I attended a genealogy RootsTech conference a couple of years ago and each morning, the big news was the attendance numbers. Thousands were attending and online technology was allowing for even more participants. This genealogy researcher can now say that I have experienced a really big genealogy conference—and cross it off my bucket list.

How a city grows and is built reflects what is important to those in charge and its residents. In Rome, St. Peter’s Basilica is seen for miles. The same is true of the Eiffel Tower in Paris.

This seems symbolic as this genealogist wonders if business has been overtaking the spiritual and welfare needs of the church’s members. When I was there so very recently, I was saddened by the empty stores in the Gateway Mall, the mall that had been constructed for the Salt Lake City Olympics in 2002. This fading mall contrasted with a new shiny one. Right there, across the street from Temple Square, a new mall, constructed more recently seems to be doing much better than the older one.  During this recent genealogy trip to Salt Lake City, I did notice that the number of panhandlers has increased. I could also see that the numerous hotels and businesses in the city couldn’t operate without service employees from foreign nations. Business and numbers have a place. But, I must ask how and where.

As the genealogy researcher always must ask questions, I’ll ask my bigger ones: How much influence does the church have?  Is bigger necessarily better?

When you work with our professional genealogists, you get answers to your questions and create documentation of your family’s unique history. We have genealogists in Europe as well the United States who specialize in everything from adoption to dual citizenship research and more.