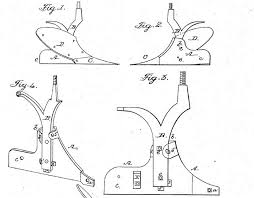 The man who changed farming, John Deere, was a family man and an inventor. When our RecordClick genealogist begins to dig,
she finds some interesting dirt on his family history.

The genealogist sees that the calendar says spring. Flowers are coming up and trees leafing out. Farmers are working the fields preparing the soil and planting. A familiar sight in my part of the country is the green and yellow of the John Deere tractor.

Time for the genealogist to bloom: Yes, there really was a John Deere. He changed farming.

It started with an idea, a plan and a patent.

Although patents aren’t the first thing that come to mind when it working with family history, this genealogist finds that patents should be an item on the genealogy researcher’s check list.

This professional genealogist had a 2x great grandfather who patented a contraption for protecting fence posts. Lots of people – not just Thomas Edison and Alexander Graham Bell – have ideas. John Deere was one of those people, too. He had an idea.

For any genealogist, the stage needs to be set.

John Deere was born in Rutland County, Vermont in the early 1800s. His father disappeared from the family when the John was small. John Deere received a basic education and apprenticed himself out as a blacksmith when he was a young man. He wound up living near or with the William Lamb family in Addison County, Vermont.

Before 1830, he married one of the Lamb daughters, Demarius. By 1830, the John and Demarius had two children. Financial problems then forced the family to Illinois before 1840. It was there that Deere began working on his idea of building a better plow.

In 1850, this genealogist has found that the Deere family was living in Rock Island County, Illinois. John listed his occupation as “plow maker”.

The family consisted of:

A family man in every sense, John Deere involved members in his plow business as it continued to grow. In the 1860 Census, the family was living in Moline, Illinois with easy access to railroads and the Mississippi River for transportation.

The household members were:

Emma was John Deere’s daughter (G.E. in the 1850 Census). Charles went on to run the business. By looking at the ages and places of birth, John and Demarius moved from Vermont to Illinois between 1837 and 1840.

John Deere’s idea for the improved plow began in the 1840s. The soil of Illinois contained less sand and more loam and clay that would stick to cast iron plows. He began working with materials and designs that required less cleaning for the farmers. Helping his endeavor, was a patent taken out by Englishman Henry Bessemer in the mid-1850s for an inexpensive industrial process for the mass production of steel. 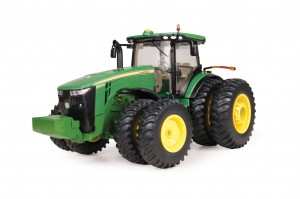 This is a current John Deere tractor. For decades, these machines have helped the farmer dig up dirt. Now the genealogist can dig in John Deere’s backyard, too!

In the 1864 Report of the Commissioner of Patents, Deere obtained two patents for moulds (sic) for casting steel. It was followed in 1865 by a patent for a plough (sic) and then in 1867 by a patent for a method of making plows.  They were the first of many patents. The family fortune was created as noted in the U.S. Census.

A number of web sites have historical documents including Reports of the Commission of Patents listing individuals, the number of the patent, and the intended purpose of the patent. The U.S. Patent and Trademark Office has more detailed records available of patents from 1790 to the current year. It includes strategies for researching patents in both the U.S. and Europe. The process can get a bit complicated.