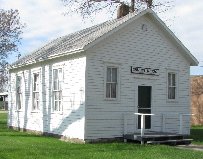 School days, school days
Dear old Golden Rule days
‘Reading and ‘riting and ‘rithmetic
Taught to the tune of the hick’ry stick
You were my queen in calico
I was your bashful, barefoot beau
And you wrote on my slate, “I Love You So”
When we were a couple o’ kids

Professional genealogist Joan Shurtliff takes us Back to School with her educational article on using school records and censuses for genealogical research. Grab your backpacks, the first class is about to start.

“School Days,” written in 1907 by Will Cobb and Gus Edwards

As I was driving past the local high school this morning, I saw a sure sign that school is going to start soon. The marching band was outside practicing. There were no fancy uniforms – mostly tee shirts and blue jeans. The seasons are changing. It also brought to mind an underused resource for genealogical researchers – the school census.

Schools and education have played an important role in the development of this country since colonial times. The first schools were founded in New England, and the need for public education was considered vital to the growth of the country. There are some dates pertaining education a family historian should remember:

Most researchers know how important school yearbooks, programs, and newspaper articles can be. Often overlooked, because they may be harder to locate, are school attendance and census records. Students usually had a personal file as well, but they may not be accessible. However, keep an eye out for attendance and school census records.

The education system has not always been as it is now. In the earliest days, only the elite could afford to send their children to school – often held in the instructor’s home. Most families could not afford the tuition.

As the necessity of an education became apparent, public schools evolved. City schools were neighborhood-oriented. Churches may have had a school. In less populated areas, a town school was a hub of activity, and country schools were centers of community gatherings. There were fewer regulations regarding the number of days in a school year and the number of students in a classroom. Emphasis was placed on reading, writing, arithmetic, spelling, history, and science because, until the late 1800s, a child receiving only three or four years of schooling was common.

In the late 1800s, an eighth-grade education became the standard. In the early 1900s, a high school diploma became more desirable. Of course, the students left a paper trail.

School teachers kept attendance records. Primarily, the records can tell the genealogist who attended school, when they attended, if days were missed, and when a student moved into or out of a school district. Once every year, though, a school census was taken. It provided much more information about a family.

The school census listing for my grandfather’s family in Lancaster County, Nebraska, District 121, 1910, lists the name of the father, the names and ages of all the children in the household under the age of 21 who are not married, and the birth dates of those children attending school. One other item of note – the family lived in a different county from the school the children attended. I have seen instances of students attending school in a different state, if that school was closest to the home.

Keep in mind that school district boundaries can change. In some areas, as soon as one district was created, another district’s school may have closed. In the early 1900s, a good number of rural school districts began the consolidation process.

As helpful as school census reports may be, they are not always easy to find, or they may have been destroyed. If the school district still exists, start there. If the school was rural, the administrator may have been a County Superintendent of Schools, and the records may be at the courthouse, possibly in an attic or basement. Start by asking the County Clerk. Check archives, in addition to historical or genealogical societies. I found my grandfather on microfilm at the Nebraska State Historical Society. It, however, has very limited holdings for school censuses. Holdings vary from state to state.

If you would like help or need help with your genealogical research, look to the expert genealogists at Record Click. We are knowledgeable in the various sources – including school attendance and census records – available to the family historian. We can do a search for information or help you organize and write your family history. We are just a mouse click away, and the initial consultation is free.