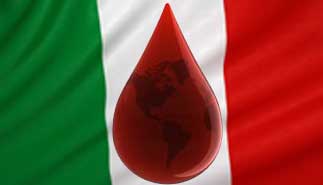 How many of you have seen the commercials in which Americans spot the new Italian Immigrants arriving on U.S. shores . . . only to find the newcomers are Fiat automobiles? Well, if you were to position yourself on the borders of Italy, you may very well see an influx of U.S. visitors, as well – but in this case, of the people variety. Dual citizenship by descent is more popular than ever, and Italy makes it possible for U.S. citizens to achieve Italian citizenship through several avenues. For this article, I’ll be delving into dual citizenship by descent with Italy, also known as jure sanguinis (Latin for “continuity of blood”). Whether you have a parent, grandparent, or a great-grandfather who was an Italian – you, too, are Italian by jure sanguinis. As the centuries-old Italian proverb says, Il sangue non e acqua – blood is thicker than water.

Have you seen those clever commercials where Americans spot the new Italian immigrants arriving on U.S. shores; but as it turns out, the newcomers are Fiat automobiles? Italians may feel the same way about the influx of Americans on Italian soil. Dual citizenship by descent is more popular than ever, and Italy makes it possible for U.S. citizens to achieve Italian citizenship through several avenues. For this article, I’ll be delving into dual citizenship by descent with Italy, also known as jure sanguinis (Latin for “continuity of blood”). Whether you have a parent, grandparent, or a great-grandfather who was an Italian – you, too, are Italian by jure sanguinis. As the centuries-old Italian proverb says, Il sangue non e acqua – blood is thicker than water.

Proving dual citizenship with Italy is not as difficult as it is with some other countries, such as France. The laws and requirements are pretty straightforward and easy to understand. However, Italian laws have changed over the years, especially since the mid-19th Century, so it helps to know a little about the history of Italy to understand the citizenship laws a little better. Are you eligible for Italian dual citizenship by jure sanguinis? Let’s find out.

Like many other European countries that suffered diasporas (migrations), Italy experienced three waves of major emigration starting in 1861 when the battle for Italy’s unification was ignited. Also known as the Risorgimento movement (loosely defined as “resurrection”), modern Italy came into existence with the unification of the Kingdom of the Two Sicilies and the Papal States.

There were several reasons why Italians left Italy in the mid-19th Century – poverty, disease, and a lack of land were just a few. The second wave occurred after World War I when internal political and economic problems, compounded by the consequences of Fascism, causing another major exodus. Between 1860 and the First World War, 9 million Italians left their homeland. The U.S. became the main destination of Italian immigrants beginning in the late 19th Century until the 1930s. The majority of immigrants settled in or near New York City, Boston, Buffalo, Chicago, Cleveland, Detroit, New Orleans, Philadelphia, Pittsburgh, and San Francisco. The third wave of emigration occurred after World War II due to the devastation wreaked on the Italian cities and countryside.

The Italian Diaspora came to an end as the Cold War of the 1950s and 1960s began. Viewed as a connecting country between Western Europe and the Mediterranean, Italy was recognized by the U.S. as an important ally. It became the recipient of financial investment and government aid that ultimately brought about the “Italian Economic Miracle,” thus ending Italy’s diaspora.

According to 2010 Census statistics, there are almost 18 million Americans of Italian descent living in the U.S., many of whom are tracing their family histories, while others are ready to experience dual citizenship with the home country of their ancestors. Like many of the European Union (EU) countries, Italy recognizes its loss of human resources, and is welcoming back the descendants of its diaspora through dual citizenship. The Italian law for Italian citizenship by descent has a number of requirements that must be met, some of which are based on particular dates.

While Italian citizenship is granted by birth through both the paternal and maternal lines (with no generational limits), there are two dates in particular that you need to keep in mind when you start researching – 1861 when Italy became unified, and 1948 when the constitution of the Italian Republic stated that women could transmit citizenship. Before 1948, based on the 1912 Italian Law 555, citizenship could be claimed only through the male parent.

The first clause of the 1948 constitution of the Italian Republic states: “All citizens have equal social dignity and are equal before the law, without distinction of sex, race, language, religion, political opinions, personal and social conditions.” The U.S. consulates still recognize the pre-1948 constitution to a certain extent, limiting applications for dual citizenship only to children born after January 1, 1948, if  they are claiming citizenship through a female. Don’t give up hope. If this is your situation, your application can be brought before an Italian court where a number of cases have been granted citizenship.

Though there is no generational limit for claiming citizenship by blood, your Italian ancestor must have been born in the Italian territories after March 17, 1861 (the date of the Official Proclamation of the Kingdom of Italy), or must have been alive (anywhere in the world) after March 16, 1861, in order to be considered part of the jure sanguinis line.

According to the Italian Citizenship Assistance Program (ICAP), if you are an American citizen, and any one of the situations listed below pertains to you, you may be eligible for Italian dual citizenship by jure sanguinis:

2. Your mother was born in Italy and was an Italian citizen at the time of your birth, you were born after January 1, 1948, and you never renounced your right to Italian citizenship.

To help you better understand if you are eligible for Italian dual citizenship by blood, the National Italian American Foundation (NIAF), in conjunction with the Italian Embassy, has prepared a free online questionnaire that will help you determine your eligibility for dual Italian citizenship. The final determinations are made by the Italian consulate for the jurisdiction in which you reside. Embassy Finder lists all of the locations and contact information for Italian embassies and consulates in the U.S.

What’s the verdict? Are you a candidate for Italian dual citizenship by jure sanguinis? If so, congratulations, but you have your work cut out for you. To prove your family history, you must obtain original documentation to support each one of your lineage claims. Each record must be certified, translated, and issued an apostille by the Secretary of State in the state it was issued.

If genealogy research is your cup of tea, stay tuned for my next article on Italian dual citizenship by descent. In the coming days, I will share with you a list of documents you will need to collect, as well as a list of guidelines that will help you avoid some pitfalls. If you wish to consult with a family history researcher who specializes in the subject of Italian dual citizenship, consider contacting a professional genealogy research service. RecordClick staffs expert genealogists – some of whom are based in Italy – who specialize in dual citizenship cases per jure sanguinis.