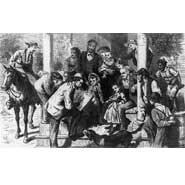 The U.S. Census has evolved over the years since its inception in 1790. According to the first Census, taken just seven years after the Treaty of Paris was signed, there were 3,929,214 people living in the United States. Unfortunately, not much information can be gleaned from the first six enumerations. However, as time passed, more and more questions appeared on the Census, but it wasn’t until 1850 when individuals in a household were actually named. Professional genealogist and expert family history researcher Tricia Dingwall-Thompson chronicles the Census and provides helpful ancestor search hints for discovering your family, even though their names may not be listed. Join Tricia as she goes in search of your family treasures.

Think of the missed opportunities — six times in 50 years, our government sent out enumerators to gather information about the U.S. population, but for some unfathomable reason, names, other than heads of households, were not deemed to be important. (It’s enough to make a family historian want to reach through time, grab some public officials by their necks, and give them a good shaking.) The result is six censuses that too many genealogists ignore. Without all the names, how do we know who those hidden people are, represented simply by tally marks? If we have ancestors with fairly common names, how can we even be sure we are looking at the correct family? Worst of all, if the family moved, how do we find them?

What we have, however, is better than nothing, and we should make the most of these early enumerations. 1790 doesn’t offer much, just three age categories: males 16 and up, males under 16, total number of females, and slaves. But how exciting to see our ancestors counted in the first-ever United States census! To be confident we have found the correct family, we may need other sources such as church, town, probate, and tax records to corroborate the enumeration. Or, we may simply wind up with two or three good possibilities.

By 1800 (and 1810, as the same form was used), we get additional age categories, making the family group more specific. And in 1820, although age categories are almost the same as in the previous two enumerations, important new questions were added. Don’t fail to check out the four columns following the age fields:

Some pages don’t have the headings, so keep blank forms, readily available on the Internet, for each census year beside your computer, and then count over the columns to each tally mark, and use your blank to see what information has been recorded.

By 1830, the government wanted to know more about the population (although not enough to ask for those coveted family names!), and ages are broken out by five-year groups. The same form was used in 1840, but it is important to know that both these enumerations have a Part 2. In 1830, this second part has information about slaves, with less specific age categories. Then, there are nine additional columns: for white people, five issues: deaf and dumb under 14, deaf and dumb 14-25, deaf and dumb 25 and up, blind, foreigners not naturalized (excuse the politically incorrect terminology). The remaining four columns ask the same questions of slaves, minus the “foreigners not naturalized.”

1840 Part 2 is the best early enumeration. Specific questions, after the tallying of slaves by age and gender, go back to the 1820 focus on employment, adding new categories reflecting our growing nation: (1) Mining (2) Agriculture (3) Commerce (4) Manufacturing and Trades (5) Ocean Navigation (6) Canal, Lake, or River Navigation (7) Learned Professions and Engineers. The next two columns offer the first chance for a specific name other than head of the household, and a specific age. The focus is “Revolutionary or Military Service Pensioners in the Foregoing totals,” requesting the individual’s name and age. That person might be head of the household, but generally not, due to advanced age. The remaining columns ask the disability questions seen on the 1830 form, plus categories for “Insane and Idiots” — whether living at private or public charge — and three final columns inquire about students in various schools, plus a final question asking the number of white people older than 20 who cannot read and write. Overall, wonderful specific information is hiding behind those innocuous tally marks, if you just take the time to locate Part 2. If you are researching on Ancestry, click the next image for all questions. Some information is transcribed on the initial page, but not all.

Finally, if you are having trouble determining your correct family in the 1830 or 1840 enumerations, use a blank form to create a template of what the family group would have looked like, based on the 1850 census. My ancestor Alexander McMillen, his wife, and six children were living in Wisconsin in 1850, but I had not found them in 1840 when I knew they were living in New York, unfortunately along with many other Alexander McMillens. So, I subtracted 10 years from their 1850 ages and created an 1840 form that would represent the family then. I knew some children could have died or married, but at a minimum, those 1850 children and their parents should have been in the count. This way, I could eliminate other 1840 Alexander McMillens without the correct people in various age and gender groups, and voilà, I found them in Livingston County, New York.

Detective work can be rewarding, especially when it involves your personal genealogy. Don’t ignore these early censuses because of vague tally marks. If you reach a genealogical research obstacle, consider contacting a genealogy research service that can assist you in your ancestor search. The genealogists at RecordClick are ready to help you trace family history. These professional family history researchers will help turn hidden people into found treasures — your family!