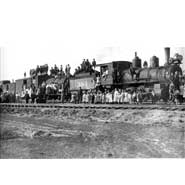 Professional genealogist Debra Hutsell delves into a bitter-sweet period of time in American history when children who were orphaned or deserted on the mean streets of the industrial Northeast were scooped up and transported by train across the Continent to be placed with families – some caring and loving, and others not so. There are many descendants to the thousands of Orphan Train Children. Debra Hutsell will tell you how best to conduct ancestor research if your ancestor was one of the “train children.”

It was 1913 when the orphan train pulled into the small town of Waterloo, Indiana, and 200 children dressed in their Sunday-best filed out and were put on display for selection. Towns’ folk came from miles around to inspect these “train children” to see if they were healthy enough, muscular enough, and trainable enough to be adopted into their home. This was a common scene played out across many Midwestern towns.

According to an article that appeared in the May 14, 1994 issue of The Fort Wayne News-Sentinel, Anna Gadomski was an Orphan Train rider on that train that stopped in Waterloo, Indiana. She was pre-arranged to go to a family in Cripple Creek, Colorado; however, during the stopover in Indiana, Father Peter Schmitt, a priest in the area, inspected the little Irish girl who was meant for him, but he found that she was crying.

According to Anna, Father Schmitt asked a Sister from the local Catholic orphanage if the little Irish girl cried like that all the time. When the nun said she did, the priest turned his attention to Anna and asked, “What about this little girl? The Sister replied, “Oh, you don’t want that little ‘Dutchman,’ you want this nice Irish girl.” The term “Dutchman” was a corruption of the German word Deutsch (meaning “German”) and was considered a slang term. Father Schmitt, who happened to be German himself, picked out the little German girl, declaring, “That’s the girl I want.” 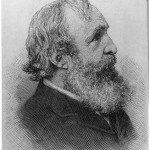 It was not unusual for choices to come down to looks, hair and eye color, nationality, or health. For example, in an excerpt from “The Orphan Train” by  Andrea Warren (November 1998) in The Washington Post, another Orphan Train rider, Lee Nailling (81 at the time of the interview), of Atlanta, Texas, remembers a large farmer sticking his hand into his mouth to see if his teeth were sound. Nailling said, ”It was all I could do to resist the urge to bite him.”According to the Orphan Train history, the adopting trains ran between the years of 1855 and 1929. The program was the brain child of Charles Loring Brace, founder of the New York Children’s Aid Society (NYCAS). Inspired by the “placing out” programs of Europe, Brace saw this as a solution to the overcrowding and poverty of the large cities in the East. Cities such as New York and Boston were teeming with immigrants, many of whom were unemployed and destitute. If parents could not care for their children, they became orphaned and homeless. Nicknamed “Street Arabs,” these unfortunate children were forced to survive on the streets, and sometimes resorted to petty crimes.

However, states to the West, such as Indiana, Ohio, and Illinois had plenty of space, and not enough laborers. Because many parents in the East saw this as a way to give their child a better future, they gave the NYCAS permission to place out their child. Many of the older children viewed the Aid Society as an employment service that would place them with families who would pay for their labor. After placing a child, a NYCAS agent went back to New York to record the name, age, and nationality of the child. The agent also made follow-up visits to the adopting family for several years; all of this created paperwork and records for the family genealogy researcher to track. There is a guide on the NYCAS website to the many collections, but the genealogical researcher will need to contact them for information.

In addition to the Orphan Train records, a genealogist shouldn’t overlook such county records as deeds, since many adoptions and apprenticeships were recorded in deed records and guardianship indices. A good source for finding data about the movement is the National Orphan Train Complex. Located in Concordia, Kansas, the complex includes a museum and research center. Another research source for the movement is the Orphan Train Heritage Society of America (OTHSA), which preserves the history of the orphan train era.

Unlike our modern adoption system, in which the child is usually an infant, the ages of the children in the Orphan Train ranged in age from six to 18. This meant that thousands of children placed by the NYCAS actually knew and remembered their background. Some kept diaries, many could be found in the census records with their new family, and sometimes with their birth family, too.

Newspapers prove to be a good source of information. Before the arrival of the Orphan Trains, handbills were printed and distributed, and local newspapers wrote stories about the impending arrival. The Orphan Trains of Kansas is one of many websites to record those stories and newspaper articles.

As the rural towns serviced by the Orphan Train became as overcrowded as the cities in the East, the NYCAS pushed the Orphan Train Movement farther West, until it was serving 45 states, including Canada and Mexico. In the early years, Indiana received the bulk of the orphans, but it soon became overcrowded. Crime in the East declined due to the shifting of the orphans, but as the orphans were shifted geographically, so were the problems. In the wake of such problems, many towns, such as Indianapolis, built orphan asylums, and manual labor schools.

The efforts of the NYCAS were often duplicated by other societies such as the New York Foundling Hospital (NYFH). The NYFH differed from the NYCAS by being a religious-based agency that placed young children in a pre-arranged placement. Placements were not always made to happy families, nor did they lead to adoption; however, the goal of the organization was to create a foster arrangement.

Now that you know a little more about the Orphan Train Movement, I bet you are asking, “What happened to little Anna Gadomski?” She was the little three-year-old German orphan girl who was pre-arranged to go to Crippled Creek, Colorado, but was picked out at Waterloo, Indiana, and never made it to Colorado. Luckily, her story is happier than many of the other children. Anna grew up near Waterloo. She said she had a happy childhood, but not a particularly normal one, since she was living with a priest. It was not unheard of for priests to adopt children.

If you are conducting an ancestor search for a family member who was an Orphan Train rider, and you are having difficulty locating the information you need, consider contacting a genealogy research service. The professional genealogists at RecordClick can help locate hard-to-find information using a number of genealogical research resources.