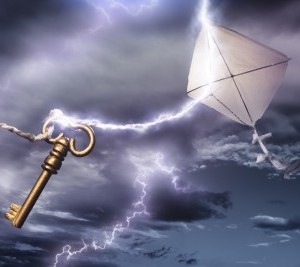 There is a lot of history to be found in the Keystone State. In Philadelphia alone: the first daily newspaper was published; Betsy Ross made the first American flag; the Declaration of Independence was signed; the first public zoo was started; and the United States Constitution was written. Pennsylvania had the distinct pleasure of having Benjamin Franklin as its sixth president (analogous to “governor”). Though it is the only original colony not bordered by the Atlantic Ocean, it is hardly landlocked, providing key ports and water access to the interior of the country. Board credentialed genealogist Joan Shurtliff keys you in on Pennsylvania genealogy.

“By failing to prepare, you are preparing to fail.” ~ Benjamin Franklin

If there were two eastern states that could be called “Gateways to the Continent,” I would select New York and Pennsylvania. Both have key accessible ports and provide water access to the interior of the country. Both have more than 300 years of history and paper trails for family historians to key into. This article will help prepare you for genealogical research in Pennsylvania – the Keystone State.

Long before the white man landed on the shores of North America, there were the Native Americans already inhabiting the continent. Most of these native people in Pennsylvania belonged to the Delaware, Susquehannock, Iroquois, Erie and Shawnee tribes. Displacement of the  Indians started in the early to mid-1600s by the Dutch and English followed by the Swedish. Understanding the history of a state can help a genealogist know when court and church documentation began and where to look when conducting your ancestor search. Timelines help family researchers keep their search realistic and in perspective:

Pennsylvania has a number of rivers which made transportation easier during its founding and settlement. The Delaware River brought settlers and immigrants from the Atlantic Ocean to Philadelphia. The Susquehanna River was a route from the interior of the state to Chesapeake Bay and the Ohio River; it has its beginnings in the western part of the state – in Pittsburgh – at the confluence of the Monongahela and Allegheny Rivers. Finally, Erie, on Lake Erie, provided access both to the Atlantic Ocean and the Great Lakes.

The map is the thing for researching in Pennsylvania, as the location of records is often tied to governmental entities or locations. Family historians need to remember that as cities became more populated, the amount of land needed increased, as well, and that as settlers moved inland, additional counties were created. Pennsylvania is a great example of this. The Western border wasn’t set until the 1780s. The original three counties were Philadelphia, Bucks. and Chester. Located adjacent to each other, the borders then and now are very different. In 1729, Lancaster County was carved from the western portion of Chester County. The last county created was Lackawanna in 1878, not quite 200 years after the first counties were formed. A farm, school, or town may have been in two or three different townships or counties without moving.

Early Pennsylvanians sought religious tolerance, and the state was also one of the first to embrace industrialization. Both brought new immigrants with new customs and ideas to the melting pot. This is what can make the search up the branches of the family tree fun and challenging.

Helpful Websites for Your Search

There are many websites that are helpful to Pennsylvania genealogical researchers. Among my favorites are:

For the genealogist, whether a professional or a family history researcher hobbyist, there are many records to seek out and a multitude of hidden corners to discover in Pennsylvania that will help you trace family history. There’s a lot of history in Pennsylvania and a lot of history in your family. There are court records, land records, school records, church records, and family records. Pennsylvania is known as the Keystone State, because it was the middle colony of the original 13 colonies, but the genealogy research services of RecordClick are your key to a successful ancestor search.

The results of a U.S. census indicated that 50% of U.S. indigenous peoples prefer the description “Native American,” 37% prefer “American Indian,” while others prefer simply “Indian.” I have used the terms interchangeably in this article.