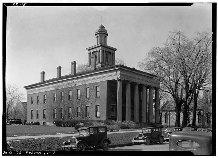 If you are an ancestry researcher, no doubt you have stumbled upon special characters as you trace family history. You know, those ancestors with “free spirits.” They usually turn out to be the most fun to research. Professional genealogist Joan Shurtliff shares yet another great story about her family. In this article, she delves into the life of her g-g-g-g-grandfather Calvin Leezen, describing him as one of those “free spirits.” As a tavern keeper in Ohio, Calvin liked to do things differently and wasn’t afraid to push the limits. How does Joan know? Through court case records, of course.

There are one or more characters in every family history – you know, the “free spirits” who did things differently and weren’t afraid to push the limits. They are the ones I have the most fun researching. My g-g-g-g-grandfather Calvin Leezen was one of those free spirits.

Calvin and his wife, Clarinda, were married in New York in the early 1800s and then decided to move to Ohio. They settled in the area of Fremont, in Sandusky County. Calvin purchased acreage containing a garden yard, outhouse, barn, and tavern. The couple had three children: Eliza, Luther, and Susan.

It is hard to imagine present-day Ohio as a rough and tumble place, but the state was the early frontier from its beginnings in the Northwest Territory in 1787 to its statehood in 1803. Early vital records are sparse, but in in my g-g-g-g-grandfather’s case, a wonderful paper trail was left. Calvin was the proprietor of a tavern, and he liked to mix it up with patrons, associates, or anyone who had financial dealings with him, which generated some great paperwork and records.

Calvin and his family moved to Sandusky County around 1821; soon thereafter, Calvin started showing up in the Court of Common Pleas, one of the lower courts in the State of Ohio. Let me preface by saying that Calvin wasn’t a murderer or bank robber. He didn’t commit any major crimes that I know of; he just kept winding up in the Court of Common Pleas. The best part of the lower court records is that they involve more of the day-to-day disagreements, such as misdemeanors, as opposed to felonies, in today’s terms.

The first of Calvin’s Common Pleas cases was Leezen vs H B Company, 1821, but it didn’t stop there. His court appearances would continue, and as time passed, Calvin would find himself as the defendant in most of the cases. In one of my favorite cases – Levi Kimball vs Calvin Leezen, 1824 (Court of Common Pleas) – Calvin was charged with unlawfully taking “four fancy chairs, one shovel and tongs, one set of hand irons, one toasting fork, one small iron kettle, one basket, one coffee mill, one bag of feathers, one pillow, two pounds of flax, half ball of wick yarn, one wash tub, one handkerchief and one pound of wool;” all of which was valued at about $50. Calvin, being Calvin, often presented counter claims, and the results generated some interesting and entertaining reading.

Most of the court cases seemed to involve the settlement of a debt; although a couple of times, Calvin was charged by the state for selling liquor to the Indians. All in all, the impression I get of Calvin is that he was by no means a pillar of the community, and he was probably not all that well liked – but he was a part of the community.

Calvin was about 28 when he met an untimely death in June of 1828. Although the cause of his demise is not known, probate records show he was attended by a surgeon from 2 June through 19 June of that year. Even after his death, there were money issues to be resolved and the guardianship of the children to be settled. The process took several years, yielding more court records that included some interesting family information.

Calvin and my other Sandusky County ancestors led me to a wonderful area resource with a very unlikely name: the Rutherford B. Hayes Presidential Center Library, in Fremont, Ohio. Adjacent to the presidential home, the library contains a plethora of local historical information, including Calvin’s court cases. Staff and volunteers have spent many hours creating a local obituary online index with more than two million entries. Starting in 2001, data from other area libraries was combined within the index. If you are a genealogical researcher in Northwest Ohio, this is a must-stop spot for you.

Family historians need to bear in mind that people haven’t been getting along since Cain and Abel. The court system evolved to help settle disputes in a civil manner. Then as now, most citizens don’t go to court for major offenses. Remember the parking ticket a couple of years ago? Except in rare instances, court records are open to the public, and there is a standard procedure for handling these sorts of cases, so it is not terribly difficult to get the gist of what is going on.

The names for the lower courts vary from state to state. They can be City Courts, County Courts, Courts of Common Pleas, Surrogate Courts, Justice Courts, and more. These records can provide wonderful insight into an ancestor. Genealogical researchers need to check courthouses, libraries, and local and state historical and genealogical societies.

For help in your ancestor search, contact us at RecordClick. We are here to assist with your ancestor search. Our experienced genealogists know many repositories of historical information and can help you negotiate court records. Hit a brick wall? We can help you through it. Our genealogical researchers can also assist you in devising a research strategy, finding documentation, or creating your own special family history.