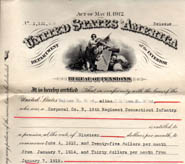 When my great-great uncle Stephen applied for his Civil War pension, I don’t imagine that he ever thought his great-great-niece would be ordering the same records from the National Archives and Records Administration almost 150 years later. What started out as just a name on a pedigree chart became a living breathing person with the help of three sites. The records in Fold3 revealed Stephen’s service in the Civil War and afforded enough information to send for his pension information from the National Archives, which divulged many personal aspects of his life. The Soldiers and Sailors System database located on the National Park Services website gave me the history of his regiment. Analyzing these records is one way genealogists honor their military ancestors and bring their stories to life.

Amid the patriotic parades and picnics used to honor our veterans, war seems to impact almost everyone – from little kids playing war games with toy guns to parade watchers waving the American flag. Wars come and go, but luckily for genealogical researchers, the records are here to stay, and they are preserved in the National Archives and Records Administration. Analyzing these records is one way genealogists honor their military ancestors and bring their stories to life.

The National Archives, known as “the nation’s record keeper,” is the ultimate location for all military records; but in recent years, many online sites have cropped up to aid the genealogical researcher by offering their own databases. One such site is Fold3. Billed as the premier site of military records for amateur and professional genealogists and historians, Fold3 is a subscription-based site with a partnership to digitize many of the indices, and in some cases the original records, from the National Archives – for the Revolutionary War, the War of 1812, the Mexican and Indian Wars, the Civil War, World War I and II, and the Vietnam War. A free, basic membership allows a genealogy researcher to search the entire site, but restricts the view of the premium records; however there are more than 40 free databases available to genealogists – for example, the pension records from the War of 1812.

Some of the other records that are available at Fold3 are naturalizations, city directories, U.S. Census, Native American records, historical photographs, and homestead records. These are also available in the free membership; however the views might be restricted. In both the free and subscription memberships, genealogists have the ability to create memorial pages, spotlights, and to annotate records.

Recently, I registered for a free, basic membership and entered the name of my Civil War ancestor – Stephen Thrasher. There are several ways to search; either the genealogist can enter a name in the search box or browse the records by category. I opted to do a hybrid search by clicking on the category – “Civil War” – and then entering the name. My search turned up the “Index to Compiled Service Records of Volunteer Union Soldiers.” The view of the document was obscured, but from the source citation at the side, I learned that Stephen served in the Union Army from the Indiana Infantry, 15th Regiment, Company K; and with this information, I was able to order the pension records from the National Archives.

In the meantime, I discovered another site that confirmed Stephen’s service. The Civil War Soldiers and Sailors System (CWSS) found on the National Park Service website is a good site for the family history researcher to research background information on the service units. It turned out Stephen’s regiment was organized at West Lafayette, Indiana, then reorganized and moved to Indianapolis. The history also lists the battles, campaigns, and the dates the regiment fought.

When Stephen applied for his pension, I don’t imagine that he ever thought that his great-great-niece would be ordering the same records from the National Archives almost 150 years later. Like many Civil War soldiers, Stephen contracted some disabilities while in military service. He contracted rheumatism September 1861 during the battles of Cheat Mountain and Greenbrier, Virginia, in October 1861. He received treatment at Louisville, Kentucky, in 1861 and again in Nashville, Tennessee, in 1862. This is confirmed by the history of the 15th Regiment of the Indiana Infantry, found on the Soldiers and Sailors’ website, which reports the regiment was at Cheat Mountain from September 11-17, 1861 and later at Greenbrier, Virginia, in October. The regiment was ordered to Louisville in November and then marched to Nashville, Tennessee, in 1862. Stephen also suffered a double hernia while in northern Alabama. According to the National Park Site, the regiment fought in Buell’s Campaign in northern Alabama and middle Tennessee from June to August 1862.

The pension packet includes such genealogical gems for the family genealogy researcher as a description and address of the soldier before and after the service, dates of service, disabilities, marriages, and death certificate. Of course, the type and amount of genealogical information varies among soldiers. In Stephen’s case, his pension packet revealed that he was a farmer and carpenter from northern Indiana who entered Company K, the 15th Regiment of the Indiana Volunteer Infantry, in June 1861 at Indianapolis. He was honorably discharged in June 1864 at Indianapolis, Indiana.

This 5′ 8″ farm boy returned to northern Indiana to marry twice. Disabilities contracted in service kept him from returning to farming or carpentry, which was confirmed by the many affidavits from surgeons and witnesses testifying to his infirmities. A death certificate in the packet indicated that he died 7 March 1918.

What started out as just a name on a pedigree chart became a living breathing person with the help of three websites. The records in Fold3 revealed Stephen’s service in the Civil War and afforded enough information to send for his pension information from the National Archives, which divulged many genealogical aspects of his life. From the Civil War Soldiers and Sailors System database through the National Park Service, I discovered the history of the regiment.

So, the next time a patriotic parade marches by, I will wave my flag just a little higher for the Civil War hero from a northern Indiana farm, and regale everyone at the picnic with my new discoveries.

If you are conducting an ancestor search for an family member who fought in the Civil War or other U.S. military engagement, and you are having difficulty locating the information you need, consider contacting a genealogy research service. The professional genealogists at RecordClick can help locate hard-to-find information using a number of research avenues. RecordClick can also sort through the information to help supply insight not only into the individual and their military career, but also into their personal life.