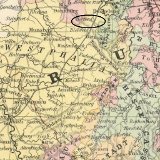 Those of you family history researchers who are tracing your German ancestry know that the process can be challenging to say the least. Board credentialed and professional genealogist Joan Shurtliff shares with you some of her favorite things – crisp apple strudels and schnitzel with noodles, along with a hearty side of German genealogy research resources. Get ready to dig in.

The author’s ggg-grandfather Herman was from Westfalen (Westfalia) located in the northwestern part of Germany/Prussia. 1850 map of Germany: courtesy of the American Geographical Society Library, University of Wisconsin-Milwaukee Digital Map Collection.

Those of you family history researchers who are tracing your German ancestry know that the process can be challenging to say the least. If it’s any consolation, you’re not alone. A large portion of U.S. citizens have some tie to Germany. In fact, according to the 2010 United States Census, Americans of German descent now number about 50 million and are the United States’ #1 ancestral group.

The Germans started coming to Colonial America in the early days of settlement, and they kept on coming. I discovered that my father was full-blooded German, and he and all of his U.S. ancestors lived in the same closely-knit German farming community north of Burlington, Iowa. His ancestors, however, started immigrating to the United States in about 1850; so, as the family genealogist, I had to go about finding where in Germany the family originated. Does this sound familiar to you family history researchers out there who are facing the task of ancestor search in Germany?

At times there is a sense of serendipity when it comes to genealogical research, and my ggg-grandfather Hermann is one of those cases. Information included in early naturalization records was sketchy – because the only real requirement to citizenship was to give up allegiance to a native land and its ruler – and the records are of little value to family genealogists. As time passed, however, information in naturalization records increased; therefore, by the late 1800s, recorded information became more helpful to a genealogical researcher. Because many of my German ancestors became U.S. citizens before 1870 when information on naturalization records was sparse,  I had to find other avenues of genealogical research. I knew that sometimes there are clues on a census, if the census taker put down the area in Germany where the individual was from; and newspaper obituaries are also a possibility.

I struck out on all counts. But then there was ggg-grandfather Hermann. He’s buried in St. John’s United Church of Christ Cemetery in Des Moines County, Iowa. Born 24 September 1805 in Germany, he died 1 October 1882. His wife, Anna Catharine was born 8 August 1808 and died 17 November 1886.

The earliest census in which I found the family was in 1860:

The family came to the United States between 1860 and 1865. They lived in New York for a time before settling in Iowa, and, as immigrants go, Herman and Catharine were a bit older than usual. The couple settled into farm life in their corner of Iowa. The serendipity occurs when Herman died. In about 1880, the State of Iowa began keeping death records. If the individual was an immigrant, often only the country of birth was noted. Herman’s death record had a bit more to say; it lists that he was born in Herford, Germany.

The thought of researching German records can be daunting because of language and handwriting barriers, but FamilySearch has done some translating, as well as transcribing, to make it easier for genealogists. While doing a marriage search for Herman and Catharine, I discovered that they were married 6 November 1831; Evangelisch (Evangelical/Protestant); Herford, Westfalen, Prussia. To make the family complete, the FamilySearch database of the births/christenings between 1558 and 1898 listed all of the Gesling children (using German spelling “Gösling”) born in Prussia:

If you are a family historian researching in Germany, there are several tips to remember: