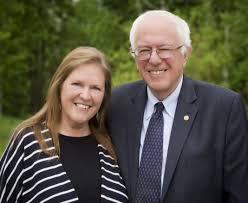 When you look at potential first lady Jane O’Meara Sanders and her family history, the answers come with a little digging.
Our professional genealogist Joan Shurtliff has found some answers in the local Brooklyn newspaper.

This professional genealogist has found that Jane O’Meara Sanders, (b. Mary Jane O’Meara, October 8, 1950) potential first lady and wife of presidential candidate Vermont Senator Bernie Sanders #FeeltheBern is a good example of someone whose family history details are helped by historic local newspapers.

Jane O’Meara Sanders, originally from Brooklyn, New York, is of Irish heritage. Jane is the youngest of five children and the only daughter of Benedict Patrick O’Meara and Bernadette Joan Sheridan (b. June 8, 1915, d. April 29, 2005 ).

This genealogist first found her parents Benedict and Bernadette in the 1940 U.S. Census. In a time when many households consisted of more than one generation, Jane’s parents and their eldest son Benedict, Jr., age 1, (b. 1939. d. 1966) were living with her mother Bernadette’s parents, Francis (Frank) and Mary Donovan Sheridan, at 196 Prospect Place in Brooklyn.

This genealogist is going to digress for a moment. New York City has been a city known for its newspapers. The first two that come to mind are The New York Times and The Wall Street Journal. They are known for coverage that goes beyond New York and includes the world, national and economic news. However, when a genealogist searches for historic local New York City news, finding it is not so simple. When you hire a genealogist, especially one who specializes in New York area ancestry research, you will most likely get someone who knows that over the years there have been many newspapers that have come and gone. The New-York tribune and Evening World are two of the historic papers that a genealogist will likely search.

Ah, and the Brooklyn Daily Eagle, first published in the 1840s, is probably this family history researcher’s favorite New York City newspaper. This Brooklyn paper became one of the first online newspaper digitization projects. A regular “small” town publication, it contains plenty of local happenings and personal items. For any genealogy researcher looking into Brooklyn, it is a readily accessed online treasure trove.

Brooklyn News Reports on the Family

In the Sunday, February 27, 1938 edition of the Brooklyn Daily Eagle this genealogist has found a nice notice that includes a picture and announces the recent marriage of Miss Bernadette Joan Sheridan of 196 Prospect Place to Mr. Benedict P. O’Meara of 96 Decatur Street.

Next, I located Jane’s parents when they were young in the 1930 U.S. Census. This genealogist first found her father’s extended O’Meara family at 96 Decatur Street:

Then, as my ancestry research continued, I found Jane’s maternal grandparents and the Sheridan family in the same 1930 U.S. Census living at 196 Prospect Place:

While most everyone doing professional genealogy research knows that a census provides vital information, a newspaper such as the Brooklyn Daily Eagle tells the family historian more.

One article reported in the Friday July 12, 1935 issue that Edward King, a brother of Julia O’Meara had died. 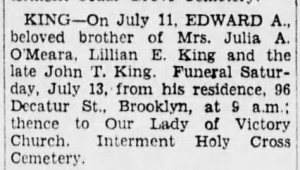 From this article in the local newspaper, one doing professional ancestry research now knows the name of the church that the family attended. One also knows the location of the burial as well as names of family members.

Active in his community and proud of his heritage, Jane’s paternal grandfather Patrick B. O’Meara is a bit more interesting. The January 2, 1944 edition of the Brooklyn Daily Eagle states that he died on Dec. 30, 1943. It also notes that he was the beloved husband of Julia A. and “the devoted father of Thomas, Edward, Benedict, Sister M. Audrey S.S.J., Mrs. Samuel McNell, and Mrs. Joseph Nelson.”

Mass was held at Our Lady of Victory Roman Catholic Church with burial reported to have taken place at Holy Cross Cemetery. When you hire a genealogist for professional ancestry research, you will likely get someone who knows how to find out if a cemetery keeps an updated online list of burials. In the case of Jane’s family’s cemetery in Brooklyn, this genealogist has confirmed that the records are, indeed, online.

With a bit o’ digging, this genealogist has found the history of this organization which includes the fact that it goes back to the 1700s. Membership includes businessmen and notables of the community. In addition to remembering their heritage, philanthropy plays a role for the members of The Friendly Sons of St. Patrick. By understanding more about The Friendly Sons of St. Patrick, one can see that participation in this group is a good reflection on Jane’s ancestors–Patrick B. O’Meara and his family.

Challenges for a Professional Genealogist

When a genealogist like me does this type of research, these are three constant struggles:

These things may also lead some genealogists to short cuts that can next lead to errors or the missing of a good family history tale.

When you hire a genealogist from the RecordClick professional genealogy service, you will get ancestry research that goes beyond the usual. Our network of genealogists in the United States and around the world will conduct research that will bring you details of your family story that you don’t yet know.