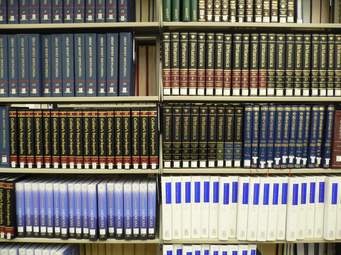 Many a family history researcher wants genealogy guidelines to be black or white. That’s theory. More than once this RecordClick genealogist has listened to lectures on how research should be done – usually, that lecture is about the theory. Theory and reality. Sometimes they are the same thing. Sometimes they are not.

The reality is that there are gray areas. When the genealogy researcher comes to primary, secondary sources and tools, there are often gray areas.

Secondary sources are, for example, indexes that refer the genealogist to a primary source, or articles or items written about an individual or created after a person’s death. An encyclopedia is considered by genealogists to be a secondary source.

A tool is a guide that gets the genealogy researcher to a primary or secondary source.

Let’s take the journey of a genealogy researcher and see how these three types of sources work for the ancestry search.  This process and various sources are found in the death records of the movie actor Tom Mix. Tom Mix was born in Pennsylvania in 1880, yet he was considered a real cowboy. His movie career spanned over 20 years in the early days of motion pictures. He made more than 250 movies; most of them were silent films.

The genealogy researcher will see that a primary source of information is his death certificate. This document may be found on the Arizona Department of Health Services web site. Tom Mix died in an automobile accident in October 1940. 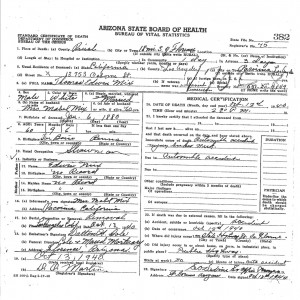 This source reveals important data about the silent film star.

Secondary sources abound. These may be used by the genealogy researcher as sources, but the one must keep in mind that there may be better, more reliable sources for documentation. When this professional genealogist was in school, teachers often cautioned against using an encyclopedia as a source. These encyclopedic volumes provided general background information, but usually did not have enough specific details to make a report unique.

Indexes are another way for the genealogy researcher to find information.  These sources are more general and give the genealogy researcher the opportunity to view a number of options before honing in on a specific person or place. This BLM – GLO index shows the number of Daniel Boones (By the way, THE Daniel Boone explorer and frontiersman, died in Missouri in 1820.) who had original land patents in Missouri:

There are many web sites including that are excellent tools for the genealogy researcher. Most are not, however, primary or secondary sources. They are tools that will provide information, ideas, and direction. They will lead to the primary and secondary resources for the genealogy researcher. It is the use of primary resources that ensures the most accurate documentation and lets others know where the information is located.

A recent trend at a few websites is to add more information and suggest possible family members to the user without adequately citing where the original data was found. The genealogy researcher must be cautious about accepting this type of reference without documentation. A web site is a tool and data on the web site needs always to have a primary or secondary source to back it up.

When you hire a genealogist at RecordClick, you get a family history researcher who will pursue various primary sources and will provide you with accurate records about your family and its history. You are special and we take pride in the ancestry research we do for you.