For family history researchers interested in Jewish genealogy of the late 19th and early 20th century, the Fiddler on the Roof 50th anniversary reunion will present a vivid look at your ancestors’ lives in the “old world”. Whether doing ancestor searches in Russia, genealogical research in Eastern Europe and family tree searches in Poland, the family history researcher will find that the Yiddish theatre is a source of colorful information for you and your family.

For the family history researcher who has been doing an ancestor search in Russia, a genealogical search in Poland or Jewish genealogy in Europe, the world of your ancestors is being honored this month.

The  National Yiddish Theatre–Folksbiene’s annual gala on June 9th will celebrate the 50th anniversary of Fiddler on the Roof , fete the musical’s creator Sheldon Harnick’s 90th birthday and honor the Folksbiene’s centennial year.

Is that an amazing celebration or what?!

Hasn’t every family history researcher who has been doing his or her Jewish genealogy search had Fiddler’s fictional shtetl, Anatevka, in mind?  How could we not love the stories of writer Sholem Aleichem as they have been adapted for the stage?

Fiddler’s vivid portrayal of the world of our ancestors has been cherished by generations.   Since it first debuted on Broadway fifty years ago,  Fiddler has been performed a record number of times, according to the history of the show and interview with its creator, Sheldon Harnick, recently published in the Jewish Standard. 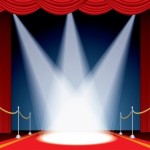 The reason it has been such a hit with Jewish genealogists?  So many of us have a family tree member who came from the “old world”.  So, to have the world of our forefathers and foremothers shlep out of the Pale of Settlement, out of the shtetls of Eastern Europe, and come alive right in front of us—that’s always been a WOW.

The show ‘s moving theatrics, poignant music and portrayal of the events of that time have had universal appeal— for anyone interested in family relationships and even more so for those who are doing genealogical research.

This amazing Folksbiene event is almost like a Fiddler family reunion with many of the stars who have shined internationally over the decades in Fiddler.  And that means everybody!

It will bring together Topol, the Golden Globe-winning, Oscar- and Tony-nominated star of the classic 1971 film, and world-renown violinist Grammy Award-winner Joshua Bell in what is billed as the largest-ever reunion of Fiddler alumni.

The event’s co-chairs are Harold Prince, Frank Rich, Harvey Fierstein.  Imagine, family history researcher, the creative brilliance RecordClick would find in the genealogical search for each of these cultural mensches!

In the mid-1800s and through to WWII, Yiddish theatre flourished in Eastern and East Central Europe as well as in the larger cities of Berlin, London, Paris and New York City.

The Folksbiene is the sole survivor of fifteen Yiddish companies that played to enthusiastic audiences on the Lower East Side in the Golden Age of Yiddish Theatre in the early 20th century.

In New York City, Yiddish theatre was the immigrants’ entertainment.  Second Avenue in New York City was one of the most important destinations for these witty, innovative shows that presented a full range of theatrical offerings– from fun comedies to melodrama to Shakespeare—all in Yiddish. 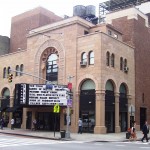 A main theatre on Second Avenue has been restored and is now a movie house.

In the family of this family history researcher, my grandmother told stories of gathering with friends to go to shows on Second Avenue. It was their break from sweatshops and hard jobs. It was also a respite from the difficult English language which they labored to learn. Your family tree members who lived on the Lower East Side of New York City, upon first arrival from Europe and Russia, likely went to the Yiddish theatre for entertainment.

When doing your Jewish genealogical research, ask your living relatives to talk about the shows they saw. Talk to the seniors in your family tree about what they recall from their parents’ stories of the Yiddish actors and actresses. Take your relative to a current Folksbiene production and see if it jars his or her memory.  This family history researcher is sure that someone in your family tree has a dramatic recollection of a show or two.

Information about these Yiddish companies is essential for the family history researcher doing Jewish genealogical research.  With so many theatre companies in New York City, there was a need for Yiddish actors, musicians, writers and theatre staff.  The family history researcher may uncover–through interviews, family stories and document research–ancestors who participated in this important part of American immigrant life.

Documentation will come from the Forverts and other Yiddish newpapers of the time that had theatre ads, articles and reviews. Jewish genealogists may also use the transliterated Lexicon of the Yiddish Theatre done by the online Museum of Family History and found also on JewishGen. You may find materials at the YIVO Institute for Jewish Research. You can also use us at RecordClick to find documents and to translate and interpret them for you.

So, Jewish genealogists and ancestry researchers, you may want to experience the world of the ancestors, once more, as the ultimate Fiddler on the Roof performance takes place on the New York City’s Town Hall stage next week.

And you may want to have RecordClick genealogists for hire do your family tree searches for you—anywhere in the world. RecordClick’s family history researchers stay on top of the latest developments in the world of your ancestors.