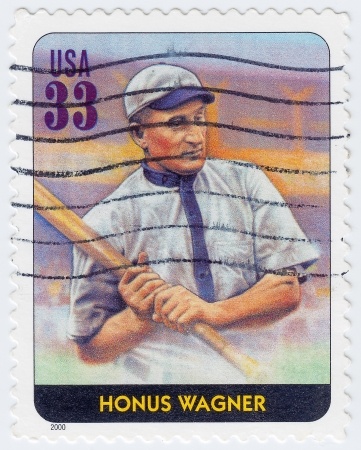 The man on the legendary and most valuable baseball card, Honus Wagner, comes to life as RecordClick’s professional
genealogist Joan Shurtliff hits it out of the park with a look at his family and his ancestry.

Finally, family history researcher, the seasons are changing. Folks are thinking gardens and flowers. In sports, this genealogist is seeing that basketball is winding down and baseball is gearing up. I have a couple of genealogy workshops on my docket; projects and trips to plan. And, yes, genealogy is everywhere… even in baseball.

For the family history researcher and those diehard baseball fans, some of the best baseball stories are about “Honus” Wagner. His given name was actually Johannes Peter, with the Johannes changed to John, at first. For the Germans and baseball enthusiasts, the Johannes became “Honus”.

Born in Allegheny County, Pennsylvania, he was the son of a coal miner who grew up to become one of the greatest baseball players in history. His career spanned approximately 20 years, from 1897 to 1917. He played mostly for the Pittsburgh Pirates. He was one of the first inductees into the Baseball Hall of Fame, in 1936. He is also known for being on one of the rarest baseball cards around. So much for his biography, says the family history researcher, what about his genealogy?

The son of German immigrants, John “Honus” Wagner (b. 1875) was toward the bottom of a string of children born to Peter and Kathryn (Catherine) Wagner. The family lived in Carnegie Borough, near Pittsburgh, PA. For a family history researcher, the U.S. Census is a good way to tell this story. The Wagner family was similar to a good many families of the era. Parents Peter and Kathryn immigrated to the United States in the 1860s and Kathryn had given birth to nine children with six surviving in 1900:

The parents and children were all living in the same household. Not long after the census was enumerated in early June, Catherine died and was buried in Chartiers Cemetery about a mile from her home. After her death, the children started leaving home. In 1903, Carrie married Charles Gallagher and Charles married Emma. John/Honus married Bessie Baine Smith in 1916.

For the family history researcher,  names and dates are important, but the occupation listed on the records must also be noted.  Honus’s Father, Peter Wagner, labored in the coal mines for more than 20 years. The genealogist looking closely at the records will see that none of the children wanted anything to do with that occupation. Albert became interested in baseball first and helped John/Honus get started in the sport, but he wasn’t the athlete his brother was. Albert played professionally in the major leagues in 1898. By 1910, Albert was no longer playing baseball. Single, he was living with his sister, Carrie, and running a pool hall. Life didn’t treat Albert that well. When he died in 1928, he was a clerk at a hotel in Pittsburgh. A nephew, John Gallagher, was the informant for the death certificate. The family history researcher can see that the members of the Wagner family seemed to look after each other.

Their father, Peter, retired from the mines and continued to live in the family home at 119 Railroad Avenue. Here is the household in the 1910 Census:

Peter died in 1913, after, this family history researcher imagines, he watched his son play baseball on many sunny afternoons. John “Honus” Wagner retired from baseball in 1917. He married, started a family and, by 1920, began a career as a retail-wholesale merchant in the sporting goods industry.

It is always interesting when the family history researcher hits an ancestry home run. The expert genealogists at RecordClick will find your stories and help you hit it out of the park by documenting your family’s one-of-a-kind record.