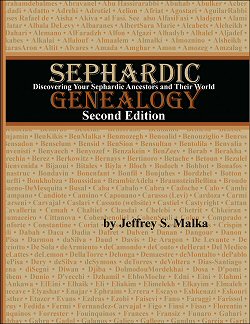 For family history genealogists who are searching their Sephardic roots, I have a real treat for you! Genealogical researcher Dr. Jeffrey S. Malka, award winning author of Sephardic Genealogy: Discovering Your Sephardic Ancestors and Their World and owner of SephardicGen.com, shares some valuable pointers for searching Sephardic lineage. Dr. Malka provides some great information that will assist you in tracing your Sephardic roots, as well as developing your Jewish genealogy family tree.

Most of you Jewish genealogy researchers probably already know that “Sefarad” (or “Sepharad”) is a Hebrew word meaning “Spain.” The adjective for the word is “Sephardic” and describes the Jews who came from the Iberian Peninsula (including Spain and Portugal). However, the term today includes Jewish communities in North Africa, Iraq, Syria, Greece, and Turkey. The difference between the Sephardim and Ashkenazim (from the Hebrew word meaning “german”) is that the latter refers to Jews from Germany, Eastern Europe, and Russia.

What you may not realize is that most of the early Jewish settlers of North America were Sephardic. Once the Sephardim were expelled from Spain, they migrated to Portugal, Italy, North Africa, and the Middle East (and later to Amsterdam and other places). Less than 200 years later, the first Sephardic Jewish congregation in North America, Shearith Israel, was founded in New York in 1684. Philadelphia’s first Jewish congregation, Congregation Mikveh Israel, founded in 1740.

Given the incredible history that the Sephardim have in the United States, I know that there are a lot of genealogists within our shores who are looking forward to gleaning helpful tips and research resources for Jewish genealogy. Genealogist Dr. Jeffrey S. Malka, author of Sephardic Genealogy: Discovering Your Sephardic Ancestors and Their World (2nd ed., Avotaynu, 2009) was kind enough to share some important research tips with Record Click (RC).

Dr. Malka’s SephardicGen.com  website is the best online source for developing a family history for your Jewish genealogy. Offline, his book, Sephardic Genealogy, won the Best Judaica Reference Book Award from the Association of Jewish Libraries in 2002. It is a “must have” resource for your Jewish genealogy family search. In 2012 Dr. Malka was awarded the prestigious Lifetime Achievement Award by the International Association of Jewish Genealogy Societies for his pioneer work in Sephardic genealogy.

RC: Who are Sephardic Jews, and how should lineage researchers begin to trace their Sephardic ancestry?

Malka: In the rigorous sense, Sephardic Jews are Jews whose ancestors lived in the Iberian Peninsula. But today it has come to mean most Jews who are not Ashkenazic Jews (Jews who lived primarily in Christian Europe). So researching the genealogy of Sephardic Jews has many similarities to Jewish genealogical research in general. In both cases the same types of religious and community records are available for searching. But there are also significant differences.

RC: What are those differences, and how do they impact Jewish genealogy research?

Malka:  There are several differences, but I will focus on four.

Most Jews in the United States today are descended from ancestors who lived in Eastern Europe where Jewish surnames – with very few exceptions – only go back to the mid-19th Century. Prior to that Eastern European Jews did not use surnames, and names took the form of ‘Jacob son of Isaac,’ which makes it very difficult to follow a family through archival documents.

In comparison, many Sephardic surnames are hereditary; almost all go back at least to 15th Century, with some starting as early as the 12th Century. This is an enormous advantage that permits the construction of centuries-long documented family trees.

Ketubot are Jewish wedding contracts. They typically provide the names of the two spouses and their parents. Some Sephardic ketubot will list several generations of names for both the groom and bride – a major genealogical advantage.

Sephardic Jews lived mostly in the Muslim world, and their records are therefore found in different places. For some, such as those in Spain, there are profuse archival documents going back to the 1200s or earlier, in which Jews are clearly identified. The Netherlands kept excellent congregational Sephardic records long before civil registration was required. On the other hand, countries in North Africa or in the Ottoman Empire, where Sephardic Jews also lived, have much poorer archival resources. But because of the long-standing hereditary nature and age of many Sephardic surnames, it is still possible to go back through the excellent records in Spain, the Netherlands, and the Americas, etc.

Because Sephardic Jews lived in many different countries, their genealogical documents will be in languages not familiar to Ashkenazic genealogists. And, although both Sephardic and Ashkenazic Jews spoke and wrote in Hebrew, the Hebrew cursive script used by Sephardic Jews is quite different from the one used by the Ashkenazim, the former being used in Israel today. So learning to read this script is an essential Jewish genealogy tool to genealogical researchers.

You can purchase a copy of Dr. Malka’s book Sephardic Genealogy: Discovering Your Sephardic Ancestors and Their World at avotaynu.com.