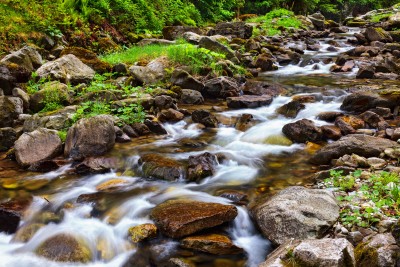 For most Nebraska genealogists, just following the winding waterways of the Missouri, Platte, Niobrara, and Republican Rivers will lead you to your ancestral information.

The name “Nebraska” comes from an Oto Indian word meaning “flat water,” which refers to the Platte River. “Platte” also means “flat river” in French. With all these references to waterways, you get a good idea of just how how the state was settled. For most folks, just following the winding waterways of the Missouri, Platte, Niobrara, and Republican Rivers will lead you to ancestral information.

Nebraska was – and is – a gateway to the West. Both the Missouri and Platte Rivers were natural routes leading to points west for early explorers, even before Lewis and Clark came through the area in 1803. The Missouri River provided access for the northern plains to the northwest. In the 1840s and 1850s, the Platte River directed pioneers, who were following the Oregon Trail, to the West Coast, and the Mormons toward what is now Salt Lake City. Both the Platte (about 200 miles long) and Little Platte Rivers are tributaries of the Missouri River.

The military set up Fort Atkinson (1820-1827), Fort Calhoun, and Fort Kearney along the Missouri. Traders provided pioneers with goods needed for their journey. Some settlers stayed and built towns along the Missouri; many were founded in the mid-1850s – Falls City, Brownville, Nebraska City, Plattsmouth, Bellevue, Florence, and Omaha, along the Missouri. The last of Nebraska’s 93 counties to be formed was: Holt, 1891; Morrill, 1908; and Deuel, 1909, in the central and western part of the state.

When searching for Nebraska genealogy records, such as birth, death, and marriage records, the genealogist or family historian needs to start with a general area and then focus on a specific locale. One of the best places to search for Nebraska genealogy records is the Nebraska State Historical Society (NSHS) in Lincoln. Its roots go back to 1878 when a group of individuals saw a need to preserve the rich history of the young state.

The NSHS has had a variety of homes including, for a time, the State Capitol Building. After World War II, a headquarters and museum building were constructed on R Street, on the south side of the University of Nebraska campus. As the state has grown, so has the amount of material entrusted to the facility.

In 1985, the NSHS entered into a time of reorganizing and changed its focus to include modern technology, developing partnerships with public and private sector organizations. Simply stated, it outgrew its building. The NSHS now has three locations in downtown Lincoln. The headquarters and library are still located in the building at 1500 R Street. A couple of blocks to the south, at 15th and P, are the museum and book store. The archives is located in a facility on K Street on the west side of the downtown area.

The museum is a good place to get an overview of the history of Nebraska. Its book store/gift shop has a number of titles that might be of interest to a genealogy researcher. The library is a must stop for those researching family history. Check the website for hours of operation.

Upon entering the library, there is a small rotunda with a historical display. On the way to the stacks is a section of family name index cards – mostly for the Lincoln/Lancaster County area – that volunteers created by abstracting old newspapers.

The library has three major research areas, including Nebraska genealogy records. The first area is sectioned off for those using materials from the archives. The second comprises shelved books from all counties. The books include local histories, published cemetery records, and volumes published by local historical groups. The third area houses microfilm. NSHS has the most complete selection of Nebraska newspapers, from small towns to Lincoln and Omaha, on microfilm. The microfilm collection also includes school census records for Lancaster County, some court records and more. A good part of the microfilm collection, including newspapers and city directories, is available for interlibrary loan.

Nebraska marriage record information for all the counties, typically kept at the county level, is also available at the Nebraska State Historical Society.

The archives’ holdings include photographs, courthouse records from across the state, and state governmental records. That’s the good news. The bad news is, because of the off-site location, accessing items from the archives is a two-day process, because they must be obtained through the library. The staff is very helpful, but it is still a process.

Of note, the library is located on the University of Nebraska campus. There is no off-street parking and or spaces designated for NSHS patrons. The parking spaces are metered.

Staff members of the library will do some basic name look-ups. Their fee schedule is listed on the NSHS website. Some discounts are available to society members and Nebraska residents. A list of researchers – including the experienced genealogists at RecordClick.com – is on the website.

The RecordClick.com genealogists can trace Nebraska heritage back to the homestead era. They know the state, various resources, and are willing to work together with you to meet your needs, whether it is advice on how to progress with your research, to do look-ups for you, or to help you break through your research brick wall.