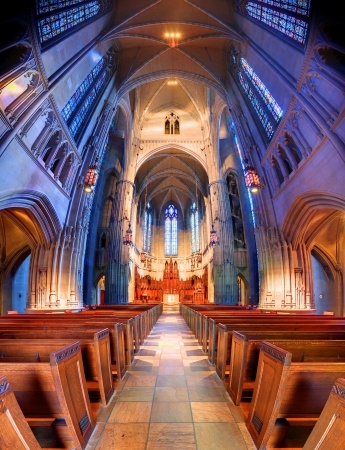 If you are an ancestry researcher in Pennsylvania, don’t be surprised if you have a religious experience. Professional genealogist Joan Shurtliff, well known for her innovative avenues of genealogical research, is sharing her knowledge of religious records and how they can be used to gather information for your ancestor search. While volumes could be written about the religions in Pennsylvania, Joan will take you off the beaten track and share her valuable research tips.

~Photo: Interior of the interdenominational Heinz Chapel in Pittsburgh, Pennsylvania.

Family historians researching in Pennsylvania need to take Sunday-Go-To-Meeting seriously. Many of the earliest residents did, and they make genealogical research in the state an interesting challenge. Like the Puritans in Massachusetts, a good number of the early settlers in Pennsylvania were religious outcasts. Unlike the Massachusetts Puritans, Pennsylvania’s early residents, including the Quakers, Amish, and Moravians, were more tolerant.

One of the basic tenets of the Quakers is tolerance, so many newcomers of different religions were welcomed. Less than 60 years after the first trading post was founded, Quaker William Penn received about 45,000 square miles in land holdings from Kings Charles II of England to settle a debt owed Penn’s father.  Around this time, the keeping of religious records was instituted.

Volumes could be written about the religions in Pennsylvania, but this RecordClick genealogist is going to present a short timeline of when some denominations arrived and then list where records might be found. A good family history researcher is willing to get off the beaten track when researching, and religion often requires genealogists to take a different path of genealogical research. Many religious denominations have their own archives with information not found anywhere else.

Presbyterians – The first Presbyterians came to America with the Puritans. The Presbyterian Historical Society is located in Philadelphia. It has online information and links to a number of Presbyterian congregations in the northeast.

Lutherans – Swedish and German Lutheran settlers were amongst the earliest in the State of Pennsylvania. The Lutheran Archives Center at Philadelphia  is the Northeast Regional Archives for the Evangelical Lutheran Church in America (ELCA). Located on the campus of the Philadelphia Seminary, it evolved from the Evangelical Lutheran Ministerium of Pennsylvania and Adjacent States founded in 1748 by Henry Melchoir Muhlenberg. Other Lutheran archives include: Central Pennsylvania, located in the A.R. Wentz Library, Lutheran Theological Seminary, Gettysburg, Pennsylvania; Western Pennsylvania found in the Tri-Synod Archives, Thiel College, Greensville, Pennsylvania; and Lutheran Church-Missouri Synod housed at Concordia Historical Institute, St. Louis, Missouri. In addition to papers of historical significance, the archives hold records of those congregations which have closed and those congregations that are open and choose to deposit their records there. Most congregations maintain their own baptism, confirmation, marriage, and burial records.

Quakers – William Penn brought his religion with him to America in 1682. Members believe in religious freedom, democracy, and non-violence. Women are treated equally to men. The Merion Friends Meeting House organized in 1695, is the oldest church building in Pennsylvania. Its burial records are on the Lower Merion Historical Society website. Quaker records can be found at the Swarthmore College Friends Historical Library.

Mennonites and Amish – Founded in the 1500s in an area that is now Germany and Switzerland, the Mennonites emphasize peace, justice, simplicity, community, service and mutual aid. A philosophical disagreement in the late 1500s led to the formation of the Amish sect. Both groups are Anabaptists, believing in adult baptism. Mennonites worship in meeting houses, while the Amish gather in members’ homes. When researching Amish, it is best to start with the Mennonites. The Lancaster Mennonite Historical Society is located in Lancaster, Pennsylvania. It is the official depository for records of the Atlantic Coast and Lancaster Conference of the Mennonite Church. Holdings include cemetery records, deeds, diaries, genealogical records, newspaper clippings, and wills. There will not be much in the way of recorded baptism, marriage, and burial records. You might be interested to read a nice little history of the Mennonite Church.

Baptists – The Baptist denomination is one of faith rather than documentation. Baptism is usually as an older child or an adult. For the family historian, it is best to look for family members who might have been church leaders or missionaries. Minutes were kept recording activities. The American Baptist Historical Society contains records of American Baptist churches, USA (formerly Northern Baptist Convention), the Free Will Baptist General Conference, and the Danish Baptist General Conference of America. See the Baptist History Homepage for early records.

Church of England/Episcopal – Information on individual parishes is listed on the Pennsylvania Episcopal Church website. The Episcopal Diocese of Pennsylvania Archives holdings include records of parishes that have closed, histories of parishes both open and closed, and publications of the Diocese including “Church News.” You can contact the archives email at archives@diopa.org. For records of active congregations, check the church. One example is Christ Church in Philadelphia. Founded in 1695, it is the oldest Episcopal congregation in Pennsylvania. Its website has online databases of baptisms, 1708-1843; marriages, 1708-1826; and burials, 1709-1808.

Roman Catholic – Although the Catholics have a long history in Pennsylvania, the first known mass occurred in the early 1700s. The 1700s saw the number of congregants grow from less than 100 to almost 10,000. The Philadelphia Archdiocesan Historical Research Center has a good many records of interest to genealogists. They include: Catholic newspapers in Philadelphia and Parish Histories; baptismal, marriage and orphanage records; death, confirmation and school records; and Parish boundary maps. Dioceses for the rest of the State of Pennsylvania have changed over the years as the number of parishioners increased. Current dioceses are: Allentown, Altoona-Johnstown, Erie, Greensburg, Harrisburg, Pittsburgh, and Scranton. The Diocese of Pittsburgh has an archive serving the rest of the state. The archives contain all sacramental records older than 70 years, beginning at the time the diocese was created. The diocese and the year they were created are: Pittsburgh, 1843; Erie, 1853; Harrisburg and Scranton, 1868; Altoona-Johnstown, 1901; Greensburg, 1951; Allenstown, 1961.

Moravians – This Moravian denomination originated in what is now the Czech Republic in 1457. A group came to the colonies, first to Georgia where they tried unsuccessfully to settle. In 1741, they came to Pennsylvania and founded the community of Bethlehem. They are known for their missionary work and their musical heritage. The newly remodeled Moravian Archives is located in Bethlehem. Holdings include a number of personal papers and congregational records.

United Methodist Church – The Methodist’s first presence in Pennsylvania came in the mid-1700s. Currently, the state has three conferences: Eastern, Western, and Susquehanna. The Susquehanna Conference Archives is at Lycoming College in Williamsport. The archives has files of historic documents for active churches, and contains records for churches that have closed. Baptism, confirmation, marriage, and burial records are the responsibility of the local church.

Pennsylvania has a diverse religious history. If you need help locating church records or finding information about that illusive ancestor of yours, rely on the expert genealogists at RecordClick. We can help you with your ancestor search by breaking down that brick wall or helping you to write your family tree history.

Photo: Interior of the interdenominational Heinz Chapel in Pittsburgh, Pennsylvania.