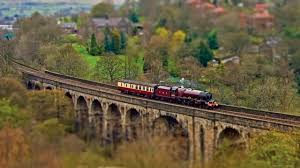 When searching for roots, the routes of the trains of yesteryear may provide lots of info for the genealogist.
There are documents, schedules, newspaper reports, and more. Who knew that train travel could be such
a wonderful genealogical trip?!

This RecordClick genealogist appreciates the role that the railroads have played in settlement of our great nation. As a family history researcher, I treasure where trains took our ancestors both geographically and financially. Since everyone likes a fast trip back in time and the actual records of train routes may be out there for everyone to find, let’s look at a bit of railroad history.

As far as this genealogist can see, water was the fastest way to get around for our ancestors during the colonial days. The drawback was–location. The rivers were not necessarily the most direct route. The construction of canals provided better inland access but they were slow and still were limited in access for patrons.

Conceived in Europe, trains became an almost instant success upon their arrival in the United States in the 1820s. In one hour, a train could cover the distance that a horse took an entire day to go.

Here is a bit of a timeline:

The construction and operation of railroads provided employment, travel opportunities and benefitted the shipment of goods. Genealogist, do note that these benefits all had the possibility of creating additional records for the family researcher. 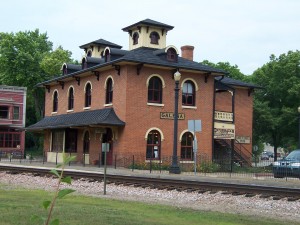 Our RecordClick genealogist has found a train station that has meaning for her genealogical work.

In total, there were hundreds of large and small railroad companies at one time or another. There were companies such as the Baltimore & Ohio Railroad, the Pennsylvania Railroad and the Union Pacific that were major players in the industry. There were small firms as well – Dansville & Mount Morris, Genesee & Wyoming, Oregon Short Line, Eric Lackawanna and the Erie and Kalamazoo Railroad.

The first thing the genealogist should do is to find old maps and histories of the areas where the ancestors lived. Railroads helped numerous towns leave a mark on an area. Through the 1930s, maps frequently showed and named railroads and railroad right-of-ways. Local newspapers regularly carried railroad information – schedules, when trains were late and advertisements. Some newspapers would print names or pictures of people arriving or leaving the station.

The papers also carried stories of railroad accidents – and there were many.

Find out what railroads the families used. Then find out a little of the history of the railroad.

The genealogical researcher should next think out of the genealogy box. Try a new info route!

There are a lot of railroad enthusiasts around posting pictures of abandoned railroad right-of-ways, bridges, railroad engines and cars. Don’t forget the numerous railroad historical societies and museums. There may even be information at the local museum. Use a search engine to see what might be found. Three online places (among the many) that might be helpful:

If you prefer to be on time with information and stick to a very efficient schedule, hire a professional genealogist from RecordClick. Our family history researchers will find new information for you and track your ancestors’ routes well.