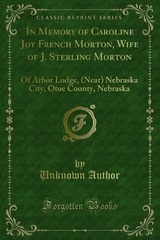 Mothers are everywhere in genealogy. The talents of those mothers are born and bred. For Carolyn Joy French Morton,
genealogy researcher and RecordClick pro Joan Shurtliff finds that her talents were taught and passed down with love from her husband J. Stirling Morton of the salt company and Arbor Day fame.

Mothers are a special and an integral part of any genealogy search.  A couple of weeks ago,  this RecordClick genealogy researcher wrote a piece about  J. Sterling Morton and his son, Joy.  An important part of that family was wife and mother Caroline Joy French Morton.

Who was she? The answer lies in a small volume that her husband penned after her death. He presented a signed copy to the Library of Congress in December 1882, which the genealogy researcher may still access in their online collection.

The genealogist will find a note at the beginning of the book, In Memorium – Caroline Joy French Morton:

“Two principal motives have prompted the printing of this little book: one was to do homage to the memory of the subject of it; the other was to help and inspire others, and especially her children, to be as she was and to do as she did…”

The genealogy researcher will see that Caroline Joy was born August 9, 1833 at Hallowell, Maine to Carolyn Hayden and Hiram Joy. Hiram had apprenticed as a saddle maker and was successful at the trade. The small family moved to Detroit, Michigan in 1834. In the spring of 1835, after a few weeks illness, mother Carolyn died.

Realizing that Hiram was more focused on his work, Carolyn knew he was not prepared to take care of a small child. According to Morton:

“He (Hiram) was of a temper and a training to find distraction in his work; but she, the little girl, not able to care for herself, nor even know the nature of her loss; according as she should fall into good hands or ill, so was she to be and so was to be her life. Of all sweet charities, the care for little friendless children is the sweetest – in hospitals and orphanages, if more cannot be done; but a home for the tender soul made its own by the love and pity of strangers is the best refuge.”

A better solution than to have the child go to a hospital or orphanage was to find a caring family. Carolyn was able to find this in “near neighbors whom she loved and trusted.” A childless couple, Deacon David French and Cynthia Eldred French, were entrusted with the child. Afterward, the child bore the name of Caroline Joy French. 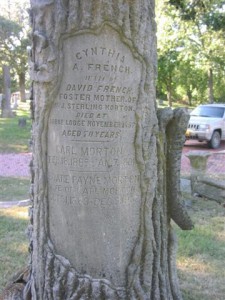 A genealogy researcher will get good info from the grave of the parents of Carolyn Morton which notes that they were her foster parents.

Often,the genealogy researcher will first think of searching for adoption documents when there is a case of a child being left without a parent or parents. The Morton book makes no note of adoption or other court action. The agreement for the care of the child was between the two couples. The genealogy researcher would not likely find official paperwork in this case.

The French family took good care of Caroline. She attended schools in Canada, Albion, Michigan and Utica, New York. Her formal education ended by the time she was twenty years old. Cynthia also made sure Caroline learned the skills she would need to run a household, as many a genealogy researcher will find was the educational process for girls in those days.

At the age of fourteen, Caroline became engaged to J. Sterling Morton, a young man one year older than she. The couple was married on October 30, 1854 at the residence of her ‘adoptive’ father, Mr. David French, located on the corner of Congress and Bush Streets in Detroit. The minister was the Rev. Joshua Cooke, minister of the Jefferson Avenue Presbyterian Church.

The same day they were married, the young couple set out on their life’s adventure and “turned their faces westward, to make a home for themselves in Nebraska… It was an absolutely unoccupied and vacant country.”

Many family history researchers picture the Oregon Trail and covered wagons when they identify ancestors who headed west. This was not necessarily the case. The Mortons took their time period’s version of planes, trains and automobiles. Morton remembered going “by rail from Chicago to Alton (Illinois) on the Mississippi River, thence to St. Louis on that river by steamer; from St. Louis up the Missouri to St. Joseph by steam boat, and from there to Council Bluffs by stage. The whole distance occupied seven full days and nights of hard, tedious riding.”

The couple first settled at Bellevue, Nebraska a place with few women and fewer amenities. Their permanent home was at Arbor Lodge in Nebraska City.

The couple began a family soon after their marriage. Many a wife at that time went home to her parents to birth her children. In Caroline’s case, the genealogy researcher may deduce that she did the same. Son Joy was born in Detroit in September 1855. Joy was followed by another son, Paul, born in 1857, also in Detroit. The third son, Mark was born in Omaha 1858 and the fourth son, Carl, came along in 1865 at Arbor Lodge.

The genealogy researcher will discover that Caroline was active in running her household, raising her sons, and the cultural life of the community. She was well liked and respected taking care to see to the needs of others.

In July 1880, Carolyn fell and injured her knee. Giving little thought to the incident, she continued her activities. The injury, however, continued to worsen and she died the following June to be mourned by her family, community and memorialized in the slim volume by her husband.

The life of Caroline Joy French Morton is, in many ways, typical of many wives and mothers of the pioneering era. We can see how a family dealt with the death of a mother, marriage practices, moving west and starting a family. The genealogy researcher will also discover the rudimentary knowledge of the medical community.

If your relatives have not left you slim memorial volumes for the mothers in your family tree, let the expert genealogists at RecordClick find your details. Our genealogists for hire will obtain original documentation and create your special family history.