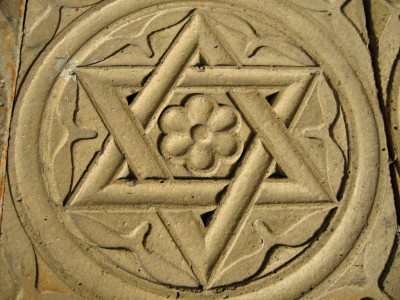 Rafael Guber is not only a member of the Association of Professional Genealogists, and the president of the Sepia Guild, but he is also a Consulting Genealogist to the Los Angeles-based Simon Wiesenthal Center/Museum of Tolerance. Guber has been a contributing writer to Ancestry magazine and was also a senior researcher and contributing narrator to the History Channel’s epic documentary, Ellis Island.

For those of you who saw the fourth episode of the 10-part PBS series Ancestors, Guber’s research and personal discoveries about his own family were documented. He teaches genealogy and Jewish history at the Jewish Enrichment Center in Manhattan, and he lectures throughout the United States and Canada.

In late October, Raphael Guber lectured on “When are Sefardim really Askenazim?” at an annual all-day seminar on Jewish genealogy in Denver, Colorado. Record Click contributing writer Abbye Silverstein was on hand to take notes that will help those of you who are searching Jewish genealogy.

Greetings Record Click readers. Allow me introduce myself. I am a Baby Boomer Jewess who grew up in New York City. I am a relative newcomer to the world of family history research and Jewish genealogy, but I’m gaining momentum as a genealogical researcher.

For the last four years, I’ve been delving into my Jewish genealogy by researching my maternal and parental ancestry on and off. About a year ago, while attending the Boulder Jewish Festival, I stopped at the Jewish Genealogical Society of Colorado (JGSCO) booth. I was so impressed with their organization that I began attending their monthly presentations, even though I was not actively researching Jewish genealogy. I found the organization to be committed to helping people find their Jewish roots, and this inspired me to attend.

Growing up in New York City, I didn’t think much about my roots, because they were all around me. But time has changed things. Now I live in Colorado, my parents and grandparents are deceased, and I am more motivated to take a deeper dive into my Jewish genealogy – that way I will know where I came from, and I can pass the information on to my children and grandchildren.

Last month, I decided to attend the annual all-day seminar on Jewish genealogy with New York-based professional genealogist Rafael Guber. He was not only informative, but entertaining, as well, and in my opinion, a true mensch. The seminar titled “Demystifying Words in Jewish Genealogy” was subtitled “When Are Sefardim Really Ashkenazim?”

“Sefarad” is a Hebrew word meaning “Spain” and describes the Jews who came from the Iberian Peninsula (including Spain and Portugal); however, the term today includes Jewish communities in North Africa, Iraq, Syria, Greece, and Turkey. Mizrachi Jews are from Iraq and Syria. For more information on Jewish genealogy, please see Kim Richards’ blog on Sephardic genealogy. On the other hand, the Ashkenazim (from the Hebrew word meaning “german”) refer to Jews from Germany, Eastern Europe, and Russia. Hasidic (meaning “pious”) Jews are an orthodox sect of the Ashkenazim.

The Anshei Sefard (translated “Spanish Jews, but not from Spain”) synagogues in the United States were started by Eastern European Jews – the Hasidim – from Poland and Belarus in the 1700s. The Hasidic European community includes Berlin, Warsaw, Vilna, Riga, Minsk, Pinsk, Kiev, Lemberg, Krakow, and Vienna. There are approximately a dozen major Hasidic movements today, the largest of which (about 100,000 followers) is the Lubavitch group, which is headquartered in Brooklyn, New York.

One particular statistic had everyone in awe at the seminar. According to Guber, 80% of American Jews have Hasidic roots. He also explained that more than 50% of the Hasidic community survived the Holocaust.

Mr. Guber explained the similarities between the Sefardic and Hasidic Jews of Europe. Both pray from the Sefardic bible, which dates back to the first Diaspora to Babylonia (597-582 BCE). Also, Sefardic and Hasidic Jews perform tefillin the same way. Tefillin entails wrapping the hand with phylacteries (a set of small black leather boxes containing scrolls of parchment inscribed with verses from the Torah). Ashkenazic and Sephardic Jews prefer different types of calligraphy for use in writing the scrolls; the Ashkenazim use a script known as Ktaav Ar that differs slightly in nine letters of the alphabet.

If you want to know more about Jewish genealogy and are looking for your ancestors, Guber suggests that you first locate where your ancestors lived in Europe. Once you have done that, decipher which Hasidic community was in that area and then contact the community directly. According to Guber, the Hasidim are very willing to help; in fact, each community has a representative with whom you can speak.

With this information, I am going to consult with my local Chabad Rabbi in Fort Collins, Colorado, to sort out my family’s Jewish genealogy. It won’t be an easy search because borders changed so many times in Poland, but I hope taking this direction will bring me closer to finding more about my family’s history.

Rafael Guber provided the following list that represents the nine major Hasidic communities and their current locations. Hopefully, this will help in your search. The list includes: Name; Current or last Rebbe (Rebbe); Founder; Headquarters (HQ); City/town of origin (Origin).

If you still need help, a genealogical service may be your best bet. RecordClick staffs professional genealogical researchers who specialize in Jewish genealogy.